M13 is a filamentous phage that infects only F+ strains of E. coli, which does not kill the host cell. This part is extracted from M13mp18 phage vector by PCR. It inclueds 11 ORFs, M13 origin, a packaging sequence and lac promoter. The promoter on the upstream of g2 (gene 2) is altered to lux promoter. A phage particle is formed only when the host cell receives AHL signal (3OC6HSL, C6) because g2p (gene 2 protein) is an endonuclease needed for a plasmid to be replicated by M13 origin, and to be packaged into the phage particle. As a reporter, GFP is inserted on the downstream of the lac promoter.


We constructed a model system for inducible phage release by regulation of g2p expression. Genome DNA of this engineered phage, shown in Fig. 1, needs two functions. One is inducible expression of g2p. We thus designed to replace the promoter for g2p with lux promoter. Note that we used 3OC6HSL in this model experiment. The other is maintenance of the genome DNA in the absence of g2p expression. We combined M13 genome double stranded DNA with pSB3K3 backbone. 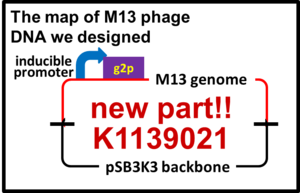 Fig. 1. Design of phage DNA for inducible phage release pSB3K3 backbone is required for maintenance of the DNA without inducer.

Firstly, we confirmed that M13 genome with two modifications related to our design kept plaque forming activity. One is replacement of the promoter for g2p with a constitutive promoter, PLacIq (BBa_I14032). The other is accommodation of pSB3K3 backbone. Even though the plasmid has two different types of replication origins, M13 origin and pSB3 origin, this plasmid (BBa_K1139020) formed plaque. In contrast, construction intermediates without a promoter upstream of g2p coding sequence (Promoterless-M13 + Plac: BBa_K1139018, Promoterless-M13 + Plac-GFP: BBa_K1139022) could not form plaque.


We then confirmed that replacement of the g2p promoter with lux promoter accomplished inducible phage release. For a plaque forming assay, we used a plasmid with lux promoter upstream of g2p coding sequence (Plux-M13-Plac-GFP: BBa_K1139021).

First, we cultured E. coli which is introduced our new part (BBa_K1139021), and added AHL, which induces the phage release. We then centrifuged the culture and obtained phage particles. Finally, we added the phage particles and lawn culture (E. coli containing pSB6A1-Ptet-luxR) to the soft agar, and poured it on an agar plate. Also, to make a concentration gradient of the inducer (AHL), we put a piece of filter paper on which dropped the AHL solution. 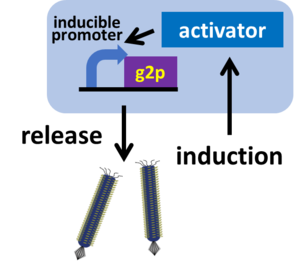 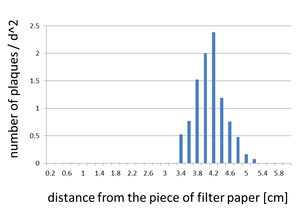 Fig. 5. The distribution histogram of the plaques(Fig. 4)