The constitutive human Elongation Factor-1alpha (EF-1alpha) Promoter regulates gene expression in mammalian cells. It is known that the CMV promoter is commonly used for constitutive expression, and here we introduce EF-1alpha promoter as an alternative mammalian promoter, which works in a wide range of cell types. The origin of this part is from Homo sapiens chromosome 6 genomic contig, GRCh37. p13.

In our characterization, the sequence of EF-1alpha Promoter was assembled in front of a GFP reporter (BBa_K648013) and hGH polyA terminator (BBa_K404108) using Freiburg’s RFC25 format. The EF-1alpha promoter-GFP was then transfected into HEK293FT cells and in vivo green fluorescence signal was observed under fluorescence microscope. The positive control was iDUET101a plasmid (Addgene Plasmid Number 17629) that contains EGFP reporter driven by an EF-1alpha promoter. A negative control was made by GFP generator that does not contain the EF-1alpha promoter. As a side by side comparison, a CMV promoter driven GFP reporter was also transfected, though a quantitative comparison between the two was not conducted in our characterization. 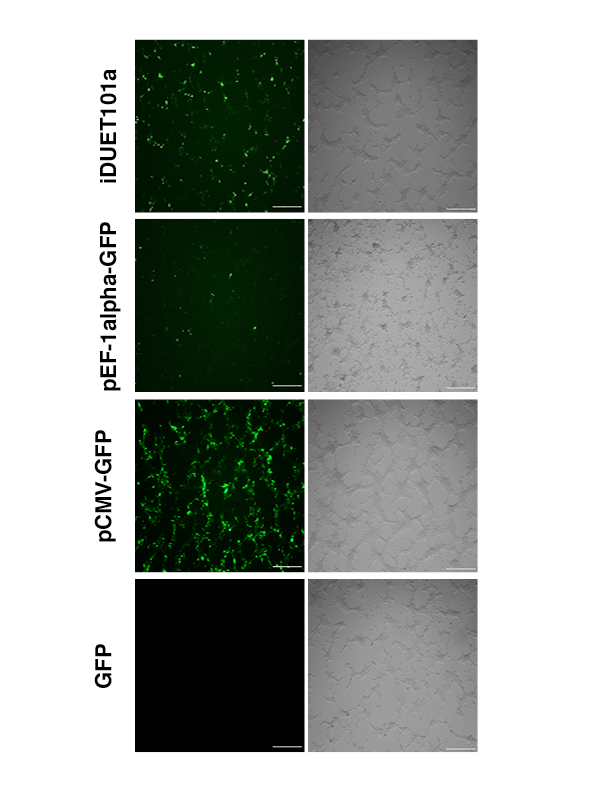 Figure 1: GFP signal of EF-1alpha observed. HEK293FT cells were transfected with iDUET101a (positive control), pEF-1alpha-GFP, pCMV-GFP (alternative mammalian constitutive promoter), and GFP without promoter. Cells transfected with pEF-1alpha-GFP showed weaker green signal compared to those with iDUET101a and pCMV-GFP. This result agreed with the result reported by Qin et al., that the EF-1alpha promoter gives weaker activity than CMV promoter in HEK293T cells. Our negative control, GFP without promoter did not give any GFP signal. Scale bar = 0.1mm

At the time of regional jamboree, no GFP signal could be observed in cells transfected with GFP reporter driven by EF-1alpha promoter. Originally, we thought that the sequence of EF-1alpha promoter cloned from iDUET101a contained the full functional promoter region annotated in pBudCE4.1 (Invitrogen). We believed that EF-1alpha did trigger transcription but failed to translate the GFP coding sequence due to insufficient 5’ untranslated region (UTR). After the regional jamboree, the promoter was re-cloned with additional 3' sequences after the identified TATA box to allow a longer 5’ untranslated region before the GFP coding DNA sequence. From the the results above, we believed that translation of GFP is successful this time.

Summary：in this part, we made contributions to the quantitative characterization of Human Elongation Factor-1alpha(EF1α) Promoter.

Accurate characterization of promoter behavior is essential for the rational design of gene circuit such as logic gates and oscillators[1]. To quantify the transcriptional strength of EF1α promoter, plv-EF1α-mCherry was transfected into liver carcinoma cell line HepG2 by Lipofectamine™ 3000 Reagent. The transcriptional strength of this promoter by calculating the fluorescence intensity of mCherry 6, 18, 30 and 54 hours after transfection. 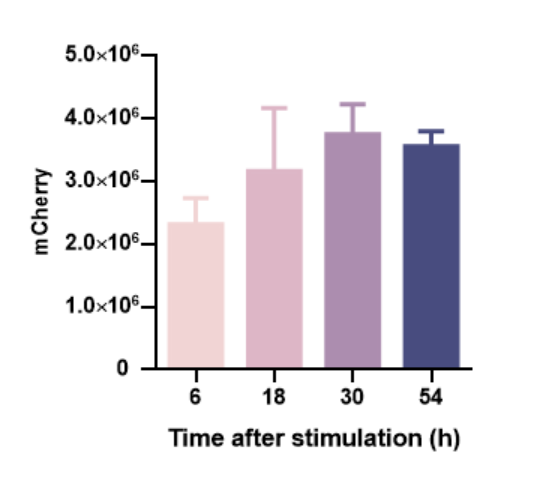 As is shown in the results, the level of mcherry transcripted by EF1α promoter kept rising during the first 30 hours after transfection, and decrease significantly at 54 hours.