This constructs expresses GFP when the pH is lowered and there is a high lysine concentration.

The Cad Promoter was originally discovered in the K-12 E.coli substrain MG1655. It's original purpose is to induce Expression of Lysine decarboxylase. This Enzyme can remove carboxy Groups from acids, thus increasing the external pH of the medium. Thus the promoter is induced upon external acidification and excess Lysine and reaches Maximum Expression under anaerobic conditions.

Figure 1: From http://biocyc.org/ECOLI/NEW-IMAGE?type=GENE&object=EG10131. Mechanism that depicts the induction of the cad-promoter.

The idea then was to insert this promoter in front of an Enzyme that could degrade nanoparticle made out of gelatin in oder to release the nanonparticles Contents. As a proof of principle we inserted the CAD promoter in front of the bioBrick BBa_I746916 which encodes superfolded GFP. 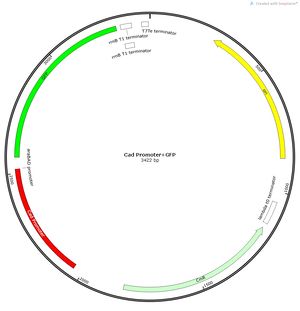 We were not able to show conclusively that the promoter is induced at low pH and high lysine concentrations, although our results strongly indicate that it is. We were able to show that the cad promoter is a weak promoter, so it can used to induce expression of proteins that are supposed to be present only in low concentrations.