Abaecin is a kind of antimicrobial peptides of honey bees(western & eastern). However, its actually working mechanism and some of its properties are still unsure. Even so, its effectiveness against microbes has been proved through some stable papers.

Importantly, the sequence here is the mature peptide sequence because there are some introns which are barriers for E. coli to transcript genes in the genome DNA. That is to say, it is better to synthesize the gene through designing primers(about two sets >> four primers) as modules for real PCR. Comparatively, purifying genes & proteins from bees' genome DNA extraction is a more complicated and time-consuming method.

The cytoplasmic membrane is a frequent target, but peptides may also interfere with DNA and protein synthesis, protein folding, and cell wall synthesis. The initial contact between the peptide and the target organism is electrostatic, as most bacterial surfaces are anionic, or hydrophobic. Their amino acid composition, amphipathicity, cationic charge and size allow them to attach to and insert into membrane bilayers to form pores by ‘barrel-stave’, ‘carpet’ or ‘toroidal-pore’ mechanisms. Alternately, they may penetrate into the cell to bind intracellular molecules which are crucial to cell living. Intracellular binding models includes inhibition of cell wall synthesis, alteration of the cytoplasmic membrane, activation of autolysin, inhibition of DNA, RNA, and protein synthesis, and inhibition of certain enzymes. One emerging technique for the study of such mechanisms is dual polarisation interferometry. In contrast to many conventional antibiotics these peptides appear to be bactericidal instead of bacteriostatic. 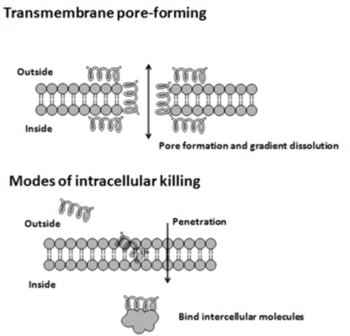 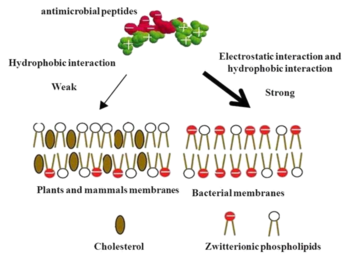