AhpCp1 is a ROS-induced promoter, which is controlled by OxyR (transcription factor) activated by ROS (Reactive Oxygen Species).

AhpCp1 is composed of AhpCp1 promoter and a dual-TFBS (Transcription Factor Binding Site) for OxyR binding. 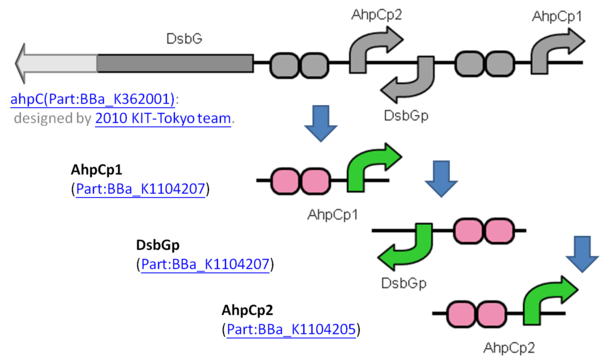 OxyR is activator of AhpCp1 promoter. More details about OxyR can be found on the PartRegistry page: Part:BBa_K1104200.

In this part, we succesfully seperated AhpCp1 (TFBS included) out of ahpC promoter (Part:K362001).

Here is the overview about the other ahpC promoter (Part:BBa_K362001) improvements: