Not Released
Sample In stock
Experience: None
5 Uses
Get This Part

OxyR is Escherichia coli transcription factor that senses H2O2 to activate transcription, and is activated through the formation of an intramolecular disulfide bond. The OxyR gene, a positive regulatory gene for the oxidative response, then controls proteins which are induced by treatment with H2O2.

Oxidative stress, through the production of Reactive Oxygen Species (ROS) , is a natural consequence of aerobic metabolism. Escherichia coli has several major regulators activated during oxidative stress, including OxyR, SoxRS, and RpoS. OxyR undergo conformation changes when oxidized in the presence of hydrogen peroxide, then positively controls the expression of cognate genes.

H2O2 oxidizes OxyR Cys199 to an R-SOH that reacts with Cys208 in an intramolecular disulphide bond. 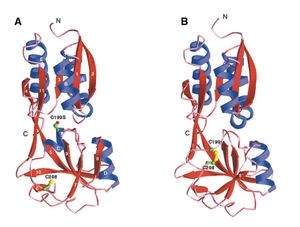 Structure of the OxyR Regulatory Domain
(A) Reduced Form: Inactive
(B) Oxidized Form: Activated by ROS

After Nosema ceranae enter bees' midgut, the natural immune reaction will lead to ROS released by epithelia of bees' midgut. In our project: Bee. coli, we use OxyR-induced promoter as the sensor of Bee. coli to sense Nosema ceranae. We select several promoters that can be induced by OxyR(Part:BBa_K1104200).

In order to enhance the strength and sensitivity of ROS-sensing promoters, we make E. coli continuously produce inactivated OxyR transcription factors, so that ROS can affect promoters more easily.

We designed a device that is composed of a sensor (OxyR-induced promoter, including TrxCp, HemHp, sufA, AhpCp1000, AhpCp2D1, AhpCp2, AhpCpD1, AhpCp1, DsbGp) plus reporter (Part:BBa_E0840). Device1 in order to enhance the effect of ROS on E. coli is added ahead: a constitutive promoter(Part:BBa_J23102), and OxyR(Part:BBa_K1104200).


Team SUIS_Shanghai 2019 attempted to improve the sensitivity of this OxyR to reactive oxygen species (ROS) by increasing the accessible surface area of the reactive cysteine (cysteine-199) within the protein. This cysteine, once oxidized will form a intermolecular disulfide bond with Cys-208, resulting in a conformational change which can activate certain ROS sensitive promoters and therefore positively expressing genes in times of oxidative stress. Our approach was to use a large set of statistical data to identify certain structural features within the environment of reactive cysteines in a wide variety of protein structures sourced from the Protein Data Bank (PDB). We compared the structural features of these oxidized cysteine environments (the cysteines will form a Sulfenic acid upon oxidation – a post translational modification which is known to be a switch in some proteins) with unmodified cysteine residues within the same proteins. The information we obtained from this large study (of over 300 different proteins) was then used to inform decisions into editing the OxyR gene sequence to mutate the amino acid sequence around the Cys-199. We hoped to make this transcription factor more sensitive to lower concentrations of H2O2 and potentially create a new device which could be used to be a very sensitive indicator of early immune response and infection.

To obtain a comprehensive account of the data used to make the decisions to edit the OxyR nucleotide sequence, please visit our Model page. Our analysis led us to change two amino acids in the OxyR protein surrounding the Cys-199 and create a new part BBa_K3031018.

We mutated amino acids GLN-203 and Val-147 in the original protein.


We sent our new sequence to Genscript China to be sequenced, along with the original OxyR sequence. The circuit we used to measure any improvement in our cells is found below and consists of a constitutive promoter which always produced OxyR transcription factor protein plus a TrxC promoter (part BBa_K1104201) which contains two binding sites for OxyR and is activated for expression of upstream genes once OxyR reacts with ROS and forms the intermolecular disulfide bond. Finally to be able to measure the effectiveness of this system to be induced by ROS, a reporter gene GFP is added and is under control of the inducible promoter TrxCp (part BBa_K1104201). This composite part, although was theoretically described by NYMU iGEM 2013, was constructed and out into the registry as a new composite part (BBa_K3031020) by us (SUIS-Shanghai iGEM 2019). We provide characterization of the composite part below which also provides useful descriptions for the parts BBa_K1104200 (OxyR coding sequence) and BBa_K1104201 (TrxC promoter)


The OxyR gene is expressed by a constitutive promoter while the inducible promoter TrxC will only express downstream genes (GFP in this case) when it is activated by oxidized form of OxyR, by virture of binding to sites (maked in pink here). When H2O2 levels are high enough the OxyR is activated and GFP is produced. Both constructs were sequenced onto a expression vector pET301(+) and transformed the plasmid into Bl21(DE3) cells. To induce the TrxC promoter we divided four 50ml test tubes of OxyR and OxyR_Mutated into twelve 15ml test tubes, each contained 5ml culture broth and 5ml LB with OD600 0.4. H2O2 was added to 10 of the tubes in the following concentrations: