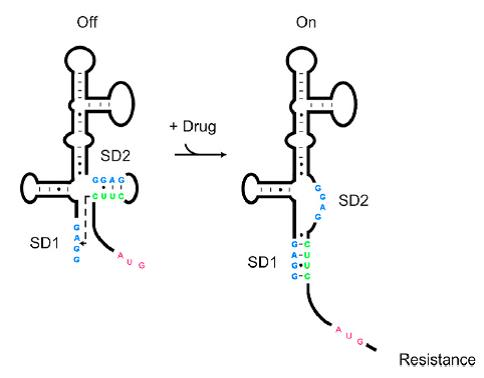 As shown in Figure 1, the 75nt RNA sequence of Aleader contains two SD sequences (ribosome binding sites) and an anti-SD sequence (CUUC) which can complementarily pair with either of the SD sequences. In the absence of aminoglycosides, anti-SD pairs with SD2. The binding of ribosomes to SD1 triggers the translation of a small peptide which stops at the stop codon ahead of SD2, and therefore inhibits the translation of the desired gene after SD2. When aminoglycosides (kanamycin for example) exists, it will induce a structural change of Aleader. The anti-SD sequence base-pairs with SD1, consequently unmasking SD2 for ribosomal binding, which results in the translation of the following gene.

Many riboswitches have lower dynamic range and higher leakage rate compared with protein regulators. To reduce the basal level and enhance the dynamic range, while having no effect on the protein product, we designed a novel riboswitch called ALeaderT, following the principle of three-phase switch design. 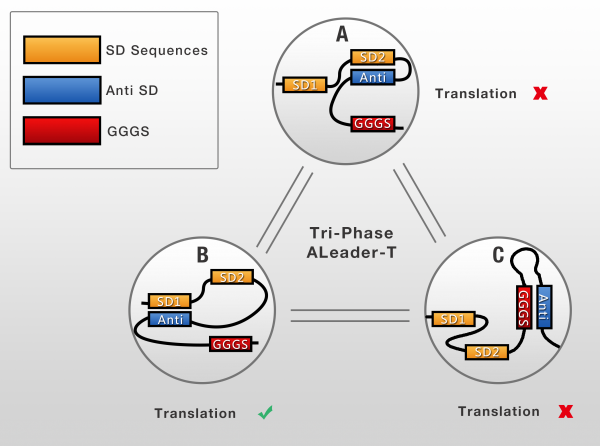 The A conformation is the ligand-free conformation that SD2 and antiSD form the stem loop, resulting in no translation nor termination. The B conformation is the ligand-binding conformation that SD2 is released and SD1 binds the antiSD, leading to the translation. And in C conformation, the SD2 is also released, making it possible to bind the ribosome, but the antiSD and dock III form a stable stem loop to reduce the transcription. Through mathematical modeling, we found that the leakage expression would significantly decrease, while the dynamic range increased several-fold. The working range is usually changed, as well.

We design a series of experiments to test the function of ALeaderT with the reporter mRFP1 and a promoter library(Figure 6). It showed a very low minimal level and high dynamic range, consistent with the previous prediction. Moreover, it changed the hill function working curve into a square-like curve. Surprisingly, the ALeaderT also showed virtues of marvelous low noise in the system and minimal difference under different regulation. Therefore it will have its talent on the precisely regulation of RNA and protein expression. 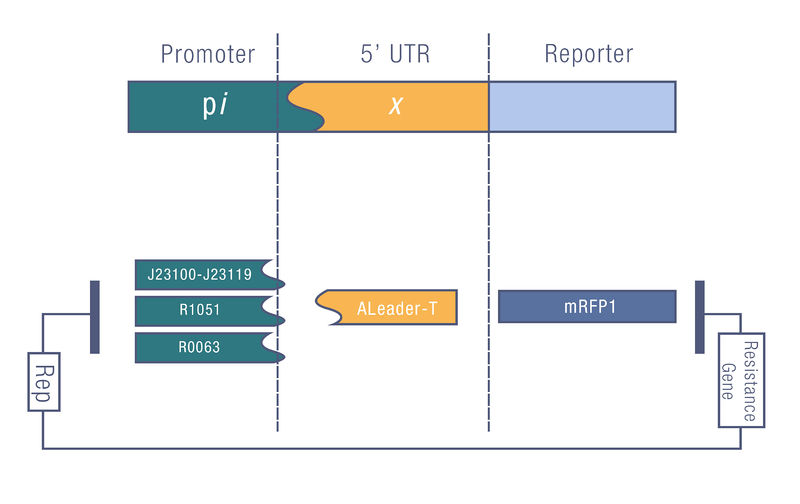 Figure 6. The Promoter Library for Quantitative Estimation of ALeaderT.

We tested the ALeaderT’s function on translation control with the reporter mRFP1 and a promoter library measured by fluorescent. 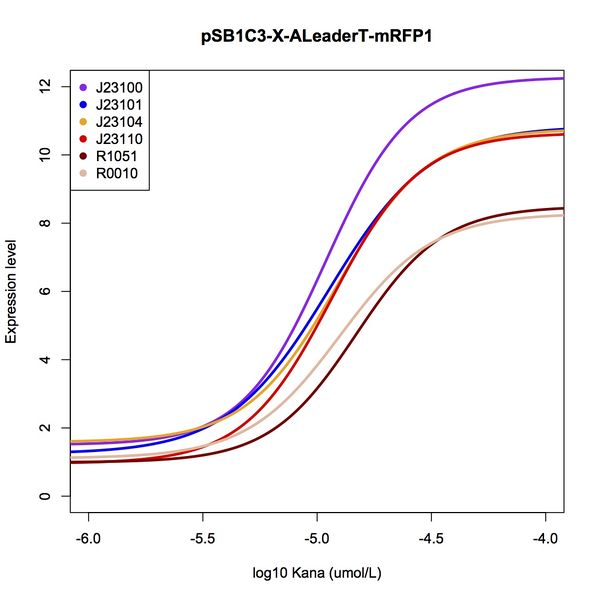 Figure 7. The dose-response curve of ALeaderT with a promoter library, measured by mRFP fluorescence test.

It showed a very low basal level and high dynamic range, consistent with the modeling prediction(Figure 8,9). Marvelously, the ALeaderT is also much more standardized and robust than the wild type ALeader(Figure 8). In other words, with different promoters, AleaderT’s function varies insignificantly. Therefore it is talented on the precisely regulation of RNA and protein expression. 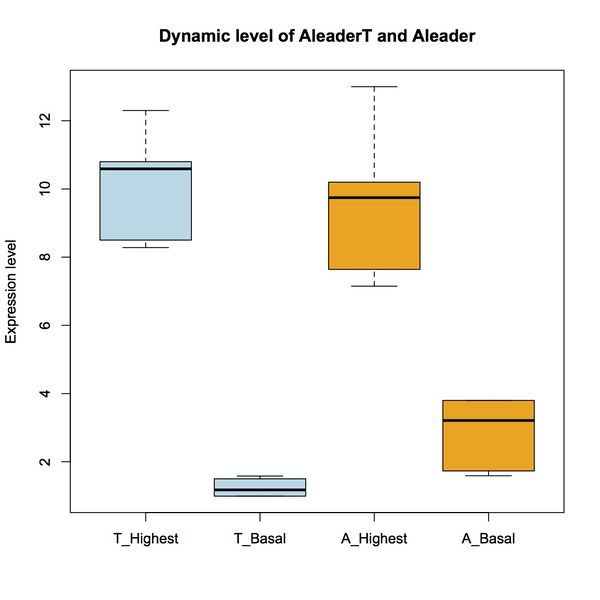 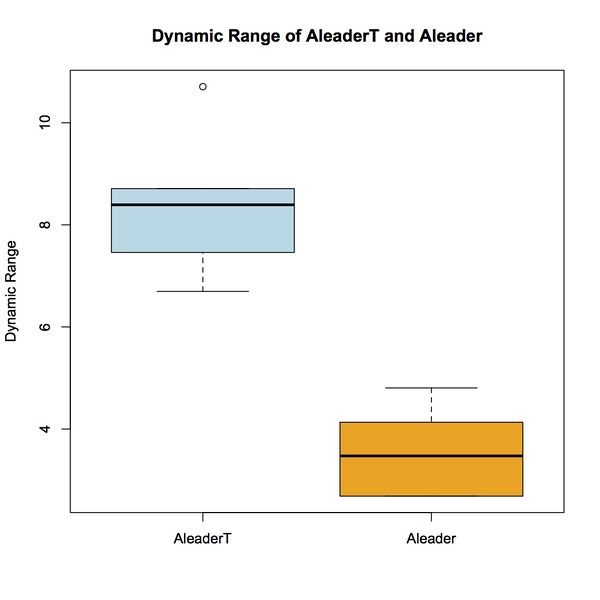 Figure 9. The AleaderT shows a higher dynamic range than the wild type ALeader.

To test if ALeaderT successfully integrate multi-functions into one riboswitch, we further verified whether the ALeaderT could work as a terminator with a tricistron design (ALeaderT-BCD operon). Similar to the previous iGEM termination efficiency test, we assembled a translational unit of fluorescence protein with ALeaderT to quantify the mRNA transcription, and to eliminate the influence from the SD2 initiated translation, we designed an in frame stop codon. We found that ALeaderT functions as a terminator, inhibited by aminoglycoside antibiotics (Figure 10), consistent with the prediction. 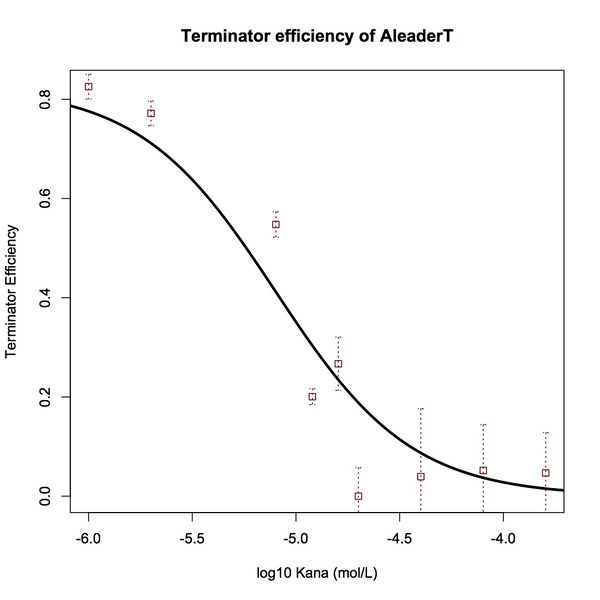 Figure 10. The conformation B of ALeaderT is a functional terminator with the maximal termination efficiency. 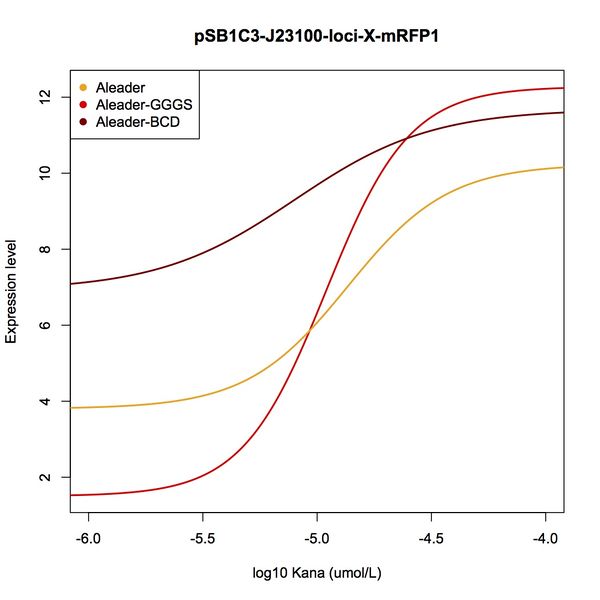 Figure 11. The functions of members in the ALeader family with promoter J23100, psB1C3 and the Csy4 loci insulator: The ALeaderT induced translation has a higher dynamic range, a higher highest level and a lower basal level, than those of ALeaderT-BCD (TCD test) and ALeader(wt).