We tested the promoter according to this article. The absorbance was measured at 600 nm, excitation at 485 nm and emission at 525 nm. Background fluorescence was also determined by measuring only media and this measurement was substracted from the measurements of the samples.

The Pm/xylS is positively regulated by m-toluic acid, so the samples were added different concentrations (0nM, 100nM, 1µM, 10µM, 100µM, 1mM and 2mM) to see the effect. (figure X). The fluorescence and absorbance measurements were used to calculate the ratio of GFP synthesis. The results show that the GFP are expressed in the samples with the Pm/xylS promoter, indicating that the promoter works as it should.

The figure shows the ratio of GFP synthesis as a function of inducer concentration. 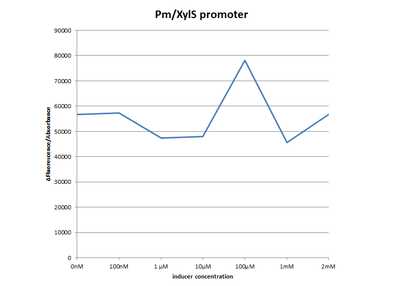 The wiki of NTNU_Trondheim 2013 team