This biobrick codes for the promoter pBAD and Ulp protease with Double terminator followed by promoter pT7 and His 6 SUMO tagged Signiferin peptide.

The biobrick BBa_K1022117 was constructed in such a way that the SUMO-peptide production was driven by the strong T7 phage promoter and the Ulp-1 production was driven by arabinose inducible promoter pBad. The plasmid was transformed into an BL21(DE3) pLysS strain. This construct was designed to check whether in vivo cleavage is possible. The main idea of the experiment is to first produce large amount of soluble fraction of SUMO-peptides and the produce the Ulp protease to cleave the sufficiently produced fusion peptides. 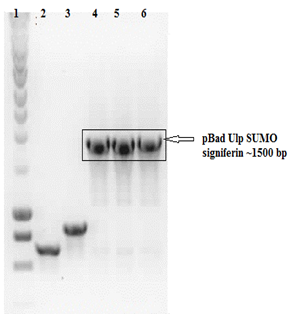 The bio brick BBa_K1022102 is used to produce the SUMO tagged peptide Signiferin.