The construct BBa_K1022114 is made by ligating the pT7 promoter BBa_I712074 in front of the lysis device from the biobrick BBa_K112808. This is to analyze how the lysis device can be controlled if needed. 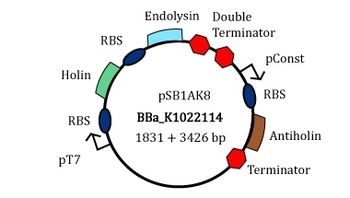 The E. coli cells transformed with pT7 lysis cassette (BBa_K1022114) is grown on a plate reader which is capable of shaking and heating to 37˚C to take readings of the cells in exponential phase at every 10 minutes. Different range of IPTG concentration is used to characterize the bio – brick BBa_K1022114. At time point, 160 minutes, IPTG is added according to the table below.

For a detailed set up of the experiment see here.

The graph clearly shows the lysis of the cells after IPTG induction. 0.1mM and 1.0mM are representative for the other measurements taken.

The blue line on the graph corresponds to the uninduced pT7 lysis device which is also representative for the untransformed E. coli control. 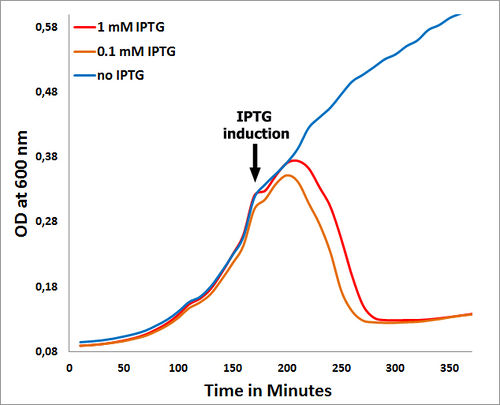 The functionality of the lysis device is improved as the promoter provides more controllability to the existing part BBa_K112808.

From the experiment, it can be clearly noted that the cells are growing exponentially and when induced by IPTG, within minutes the lysis device starts to kill the cells. Whereas the control E. coli cells with or without the plasmid used in the experiment, are growing even after IPTG is added to them. This proves that the cells do not die due to the IPTG chemical, but due to the lysis device which is activated by the pT7 promoter.