This part codes for the peptide 'Magainin II' tagged with 'His-6-SUMO' molecule. Its production is triggered by IPTG (through pT7 promoter). 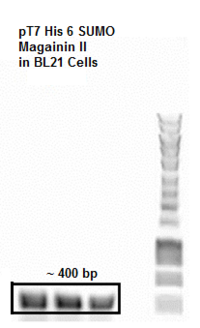 The presence of plasmid with gene inserts encoding the SUMO-peptide (BBa_K1022103) was confirmed by a colony pcr. The expected size of the insert with the T7 promoter was approximately around 400 bp which was clearly evident from the agarose gel picture. An Eurogentec Smartladder MW-1700-10 (https://secure.eurogentec.com/uploads/TDS-MW-1700-10.pdf) was used to identify the size of the fragments.

The MIC of Magainin II on S. delphini, B. subtilis and E. coli were done according to the protocol described here. Magainin II did not give a measurable reduction in growth below 40µM (Figure 1), making us decide not to proceed testing, as modeling showed it was not possible to reach these concentrations through expression in E.coli. 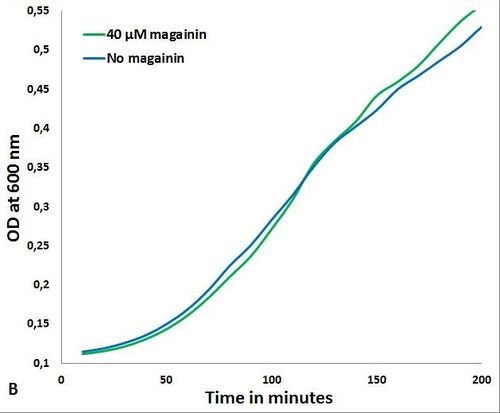