Small RNA is an important role on gene regulation. It will interact with the targeted mRNA by imperfect basepairing, reducing the translational efficiency and recruiting chaperones such as Hfq for translational termination.Since we choose sRNA to be part of our regulated-system, we need to prevent the sRNA from effecting undesired genes, so it is necessarily to design artificial sRNA that targets specifically to the desired genes.

The following figure depicts the mechnism of sRNA. The sRNA basepair with the target mRNA and the ribosome can't bind the mRNA. Therefore, the translation would be inhibited. 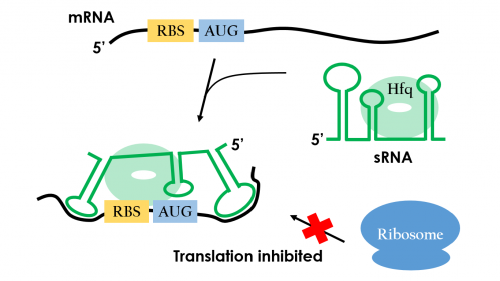 We first picked the sRNA from a library of artificial sRNA that was constructed by fusing a randomized antisense domain of Spot42, the scaffold that is known to recruit the RNA chaperons. As we want the sRNA we picked can specifically complementary to the SD sequence which in our designed RBS(BBa_K1017202[1]), we picked the one which contains a consensus sequence, 5’-CCCUC-3’. Our artificial sRNA also has three stem-loop double stranded RNA structures, and the loop closest to the 3’ terminus is complementary to a sequence preceding the initiation codon of mRNA, so that it can prevent the ribosome from binding to the initiation condon, so the translation would be repressed. 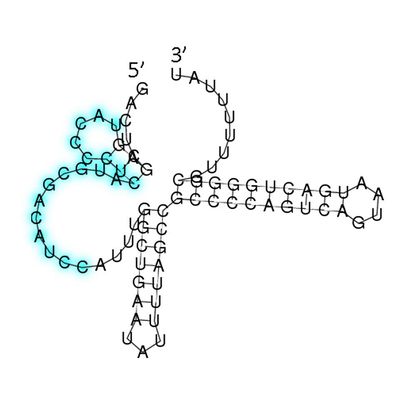 To test whether or not our sRNA would effect the growth of E. Coli, we compared the growth of E. Coli with PSB1C3 (without RFP) and the E. Coli growth with Pcons + sRNA. It can be observed from the following figure that the resultant growth curves are similar, showing no signs of growth interference. This result proves that our sRNA regulated system can be integrated into bacteria. 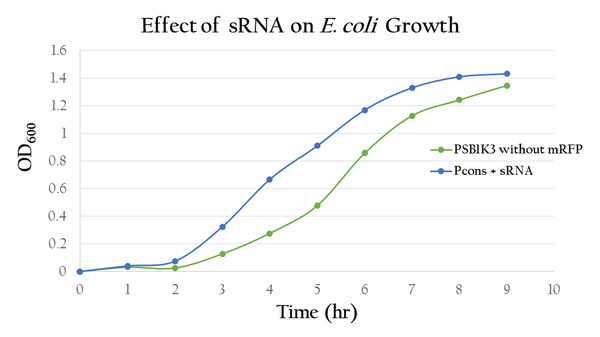 Then, We employed the following biobricks to test the regulation efficiency of the sRNA we designed :

Figure 4.The biobrick of testing the sRNA. 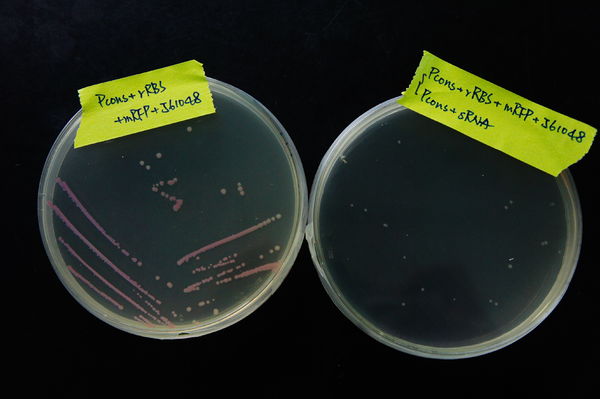 Figure 5.The bacterial colonies with sRNA shows no clear sign of RFP expression, while the colonies without sRNA do.

We co-transformed the following circuits into E.coli to test the efficiency of sRNA:

Figure 6 can be observed that sRNA can regulate RFP expression. The bacterial colonies without sRNA(green curve) expressed fluorescence higher than the colonies with sRNA(blue curve). This proved that sRNA we designed really had its repressive function. 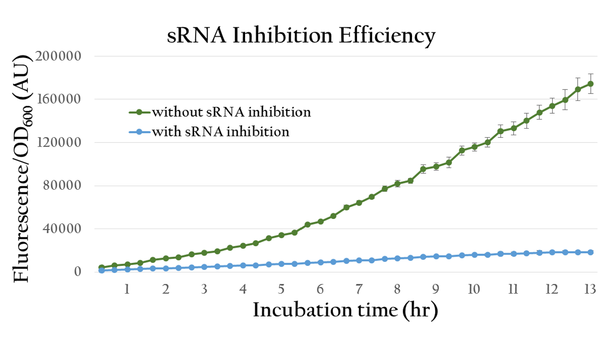 Acknowedgment of sources and references