Not Released
Sample It's complicated
Experience: Issues
2 Uses
Get This Part

The signal sequence from the periplasmic maltose binding protein (MalE or MBP) from E. coli. This signal peptide will target a protein for Sec transport in an E. coli chassis.

Maltose uptake by E. coli has been studied for over 40 years (Kellermann & Szmelcman 1974). Uptake is catalysed by a member of the ubiquitous ATP Binding Cassette (ABC) superfamily and involves a periplasmic binding protein (MalE) that captures soluble maltose and passes it on the membrane-embedded MalFG channel complex. Active transport is then driven by ATP hydrolysis catalysed by the cytoplasmically-orineted MalK protein (Oldham & Chen 2011).

MalE is targeted to the periplasm by a Sec-dependent signal peptide.

Sec signals have an N-terminal positively-charged region (shown in red), a central hydrophobic region (shown in blue), and a C-terminal AxA motif (highlighted in green) that facilitates cleavage by leader peptidase I (LepB) in E. coli. This targets a protein, via the SecA ATPase, to the SecYEG translocon in the cytoplasmic membrane (reviewed by Lycklama et al. 2012). The Sec system transports unfolded polypeptides through a narrow channel and is incompatible with substrates that fold in the cytoplasm prior to export. Fusions between the MalE signal sequence and reporter proteins can inform on the mechanism of Sec export (Bassford et al. 1979).

The MalE Sec signal peptide can be fused to the human PP1 protein but cannot direct it to the periplasm in E. coli.

PP1 encoded by BBa_K1012001 was genetically fused to the E. coli MalE Sec signal peptide encoded by BBa_K1012004 to give a MalESP-PP1 fusion protein. The E. coli K-12 chassis MC4100 was transformed with a plasmid encoding the MalESP-PP1 fusion protein and the cells were fractionated by permeabilisation of the outer membrane and digestion of the cell wall. This generated a periplasmic fraction and a sphaeroplast fraction (which is the cytoplasm of E. coli bounded by an intact inner membrane). The periplasm and sphaeroplast samples were analysed by Western immunoblotting using an HA antibody. As shown in Figure 1, PP1 was successfully produced when fused to the MalE signal peptide, however the protein was not targeted to the periplasm. 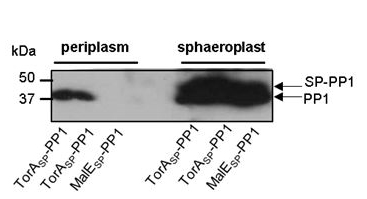 Analysis of the periplasmic fractions from cells producing MalESP-PP1 clearly show the presence of the full-length fusion protein in the cell cytoplasm (Figure 1). However, the MalE signal peptide cannot target PP1 to the periplasm. It is likely that the reason for this is binding of managanese cofactors in the cytoplasm by PP1, which induces folding this precluding transport by the Sec pathway. This is corroborated by the fact that attachment of a Tat signal peptide (BBa_K1012002) solved the problem and allowed periplasmic targeing of PP1 (Figure 1).