This part encodes the human protein phosphatase-1 (PP1) catalytic domain. PP1 is a manganese-dependent serine/threonine phosphatase (Egloff et al. 1985). The enzymatic activity of PP1 is inhibited by microcystin-LR (MacKintosh et al. 1990). Binding of microcystin to PP1 leads to covalent bonding with a cysteine residue, which generates an irreversible 'dead-end' complex (MacKintosh et al. 1995). While this can have fatal consequences for animals poisoned by microcystin, this irreversible binding event could potentially be used to remove microcystin from aqueous solution if PP1 could be harnessed in a synthetic device.

PP1 can be produced in an E. coli chassis and exported to the periplasm via the Tat pathway.

PP1 encoded by BBa_K1012001 was genetically fused separately to either the E. coli TorA twin-arginine signal peptide (TorASP-PP1) (BBa_K1012002) or the E. coli periplasmic maltose binding protein (MalE) Sec signal peptide (MalESP-PP1) (BBa_K1012004). The TorA signal peptide directs proteins to the twin-arginine translocation (Tat) export pathway, which transports fully folded (often metal-containing) proteins (Sargent et al. 1998). The MalE signal peptide directs proteins to the general secretory (Sec) pathway, which threads proteins unfolded through the inner membrane (Pugsley 1993). The fusions were expressed in E. coli MC4100 and the cells were fractionated by permeabilisation of the outer membrane and digestion of the cell wall. This generated a periplasmic fraction and a sphaeroplast fraction (which is the cytoplasm of E. coli bounded by an intact inner membrane). The periplasm and sphaeroplast samples were analysed by Western immunoblotting using an HA antibody. As shown in Figure 1A, PP1 was successfully produced when fused to the TorA and MalE signal peptides. 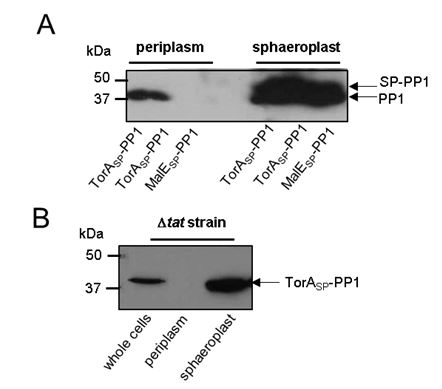 Figure 1: PP1 can be exported to the periplasm by the Tat pathway. (A) E. coli MC4100 cells producing PP1 fused to the signal peptides of TorA (TorASP-PP1; Tat-targeting) or MalE (MalESP-PP1; Sec-targeting) or (B) E. coli strain MC4100 delta-tatABC (which lacks a functional Tat pathway) producing TorASP-PP1, were cultured in LB medium, cells harvested, washed and the periplasmic and sphaeroplast fractions prepared. Samples were separated by SDS-PAGE (15% w/v acrylamide), transferred to PVDF membrane and probed with anti-HA antibody. Samples represent the same proportion of total protein present in the two fractions.

Analysis of the periplasmic fractions from cells producing TorASP-PP1 and MalESP-PP1 clearly shows the presence of PP1 in the periplasmic fraction when it was supplied with a Tat targeting signal peptide, but not a Sec-targeting signal peptide (Figure 1A). This is consistent with PP1 being a manganese-binding protein, since native bacterial Mn-containing proteins are often natural Tat substrates (Tottey et al. 2008). To confirm that the Tat pathway was definitely responsible for the transport of PP1 fused to the TorA signal peptide, a mutant of MC4100 lacking a functional Tat pathway (delta-tatABC) was used. The tat mutant E. coli producing the TorASP-PP1 construct was fractionated and analysed by Western immunoblotting. In this case PP1 was present in whole cell and sphaeroplast fractions, but absent in the periplasmic fraction (Figure 1B). Taken together, these data demonstrate that PP1 can transported across the inner membrane by the Tat pathway.

How much PP1 is in the periplasm of each E. coli cell?

In order to quantify the amount of PP1 present in the periplasm of an E. coli cell, it was necessary to isolate some very pure PP1 protein that could be use for accurate quantification. To achieve this, PP1 was over-produced as a fusion protein to glutathione-S-transferase (GST). The PP1-GST fusion was over-produced in E. coli BL21 (DE3) and 8 litre cultures were grown until an OD at 600nm of 0.4 was reached. At this time the cultures were supplemented with 1 mM IPTG (final concententration) to induce expression of the plasmid-encoded genes (Figure 2A). Following IPTG addition the cultures were incubated grown overnight at 20°C. The cells were then harvested by centrifugation, washed and the cell pellet resuspended in 25 mM Tris.HCl pH 7.5, 0.25 M NaCl, Complete Protease Cocktail (EDTA-free Roche), 0.1 mg/ml DNAse, 1 mg/ml lysozyme. Cells were lysed by sonication and the clarified cell extract was loaded onto GST beads (Qiagen). The beads were washed thoroughly to remove non-specifically bound proteins and then the tightly bound proteins were eluted with 50 mM glutathione, 25 mM Tris.HCl pH 7.5, 250 mM NaCl. At this stage, the eluted protein was highly enriched for the GST-PP1 fusion protein (Figure 2B, left hand lane). The fusion protein was then incubated overnight at 4 °C with 200 µg of GST-tagged PreScission Protease, which liberates free PP1. To remove any unlceaved fusion, the free GST, and GST-tagged PreScission Protease, the mixture was re-incubated with GST beads. The purity of the recovered, cleaved PP1 protein was sanalysed by SDS PAGE (Figure 2B, right hand lane). To determine the quantity of PP1 protein obtained, th absorption at 280 nm was measured. based on the primary amino acid sequence, the extinction coefficient of PP1 at 280 nm is 34380 M-1 cm-1. The amount of protein recovered was then determined using the Beer-Lambert Law (Absorbance = Extinction coefficient x concentration ( mol L-1 ) x path length (in cm).

Figure 2. Purification of PP1. (A). E. coli strain BL21 (DE3) harbouring pGEX6P-1 PP1 CAT gamma was grown to an OD 600nm of 0.4, after which expression of the GST-PP1 fusion was induced by addition of 1 mM IPTG. A sample of the cells immediately prior to IPTG addition and 4 hours post addition were analysed by SDS-PAGE (12.5% w/v acrylamide). (B). The GST-PP1 fusion protein was purified from cell lysates using glutathione sepharose.

Since a known quantity of PP1 had been purified it was possible to carry out quantitative Western immunoblotting to elucidate the number of PP1 molecules that are present in the periplasm of each E. coli cell producing TorASP-PP1. When probed with anti-PP1 antibody a whole cell fraction of TorASP-PP1 cells gives two bands (Figure 3). The slower migrating band is unprocessed TorASP-PP1 present in the cytoplasmic fraction that has its signal peptide attached, whereas the faster migrating band is PP1 that has been exported into the periplasm and the signal peptide has been removed. Known quantities of purified PP1 were loaded on the same SDS-PAGE gel as the TorASP-PP1 samples to allows direct comparison of band intensity.

Figure 3. Quantifying the number of molecules of PP1 in the periplasm of each E. coli cell. The optical density at 600 nm of an overnight culture of E. coli cells producing plasmid encoded TorASP-PP1 was measured and serial dilutions were loaded as indicated, alongside 2, 1 and 0.5 ng of pure PP1. Following SDS-PAGE (12% w/v acrylamide), samples were transferred to PVDF membrane and probed with anti-PP1 antibody (a kind gift from Prof. Tricia Cohen of the Protein Phosphorylation and Ubiquitylation Unit, University of Dundee).

Given that the band of pure PP1 at a quantity of 0.5 ng has a similar intensity to the 37 kDa band of signal peptide-less PP1 from 4 x E7 cells, it is logical to assume that there is approximately 0.5 ng of PP1 present in that band. Assigning the value of 0.5 ng of PP1 in being expressed in the periplasm of a total of 4 x E7 cells then allowed us to calculate the number of PP1 molecules being expressed in the periplasm of each cell:

∴ The number of PP1 molecules in the periplasm per cell

The slow migrating band of full-length TorASP-PP1 precursor in the 4 x E6 cells lane has comparably half the band intensity of the 0.5 ng pure PP1 band. This larger protein band is composed of PP1 still bound to TorASP in the cytoplasm and has therefore not been exported. Considering this it was possible to calculate the number of non-exported PP1 molecules trapped in the cytoplasm by first assigning the value of 0.25 ng of PP1 expression to the band (given that the band is roughly half the intensity of the 0.5ng band).

∴ The number of PP1 molecules in the cytoplasm per cell

Periplasmic PP1 can "mop up" microcystin from aqueous solution.

After confirming that some of the PP1 localises to the periplasm of E. coli when fused to the TorA signal peptide the next experiment was to test the ability of periplasmic PP1 cells to remove the microcystin toxin from solution. Since we also wanted to determine whether the cellular location of PP1 was important for the mop to function, we engineered a control plasmid that would produce stable PP1 in the cytoplasm. To achieve this we fused PP1 to the N-terminal 36 amino acids of the E. coli NarG protein, which is a non-exported nitrate reductase.

Next, 500 ml cultures of E. coli MG1655 cells carrying either an ‘empty’ control vector, a plasmid encoding TorASP-PP1, or a plasmid encoding NarG36-PP1, were grown overnight. Cells were harvested and washed, and the intact whole cell pellets weighed and re-suspended in Tris-buffered saline (TBS) buffer at 1 g cells/ml. Next, 0.5 ml of the re-suspended E. coli cells were incubated with TBS buffer containing microcystin-LR (Enzo Life Sciences) at a final concentration of 5 nM for 1 h at room temperature. After incubation the bacterial cells were removed by pelleting and supernatant was withdrawn, snap frozen, and stored at -80 °C. 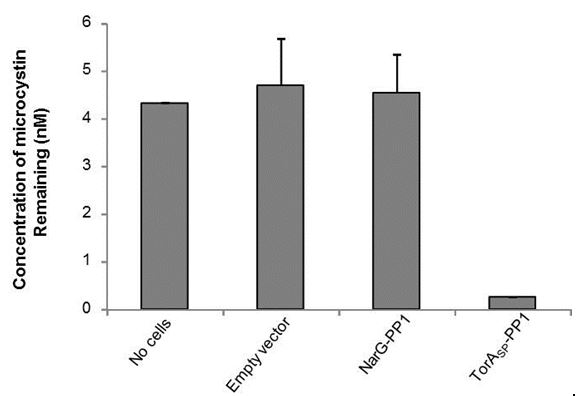 Figure 4: Periplasmically-located PP1 can remove microcystin from solution. E. coli cells (0.5 ml) containing (i) an ‘empty’ plasmid vector, or the same vector producing PPI fused C-terminal to either (ii) the TorA signal peptide (TorASP-PP1) or (iii) the first 36 amino acids of the cytoplasmic protein NarG, were incubated with TBS buffer containing 5 nM microcystin for 1 h at room temperature. The concentration of microcystin remaining in solution after pelleting the cells was determined by competitive ELISA.

We thank Dr James Hastie (Division of Signal Transduction Therapy, College of Life Sciences, University of Dundee) for providing the pGEX6P-1 PP1 CAT gamma vector encoding a GST fusion to PP1. This vector was used to purify the protein and also served as a PCR template to allow cloning of the PP1 coding sequence into pSB1C3, remove illegal restriction sites, and submit to the Registry under RFC[10] standard.