Test Device 6 expresses GFP under the control of a constitutive promoter from the Anderson collection.

This year our team wishes to introduce a new kind of basic parts-degradation tuning RNAs to the iGEM community. The dtRNAs are reported to be capable of modulating mRNA degradation rates by resisting or facilitating endogenous RNase digestion. We plan to add this compact(10-60 bp) component upstream of the RBS B0032 in this part, in order to enhance GFP reporter signals without introducing metabolic burden to the host organism. The samples for measurement are prepared as follows:

1. Use inverse PCR to obtain the vector fragment, and the position of the joint is right upstream of the RBS B0032.

3. E.coli DH5α competent cells are transformed with finished HiFi assembly reactions, and colonies are picked and sequenced on the next day.

4. Colonies with correct sequences are cultured for 8h and then transferred to a microplate with 100-fold dilution, GFP fluorescence (excitation=488 nm, emission=515 nm) and OD600 are measured every 15 minutes for 16 h duration.

The results are as follows: 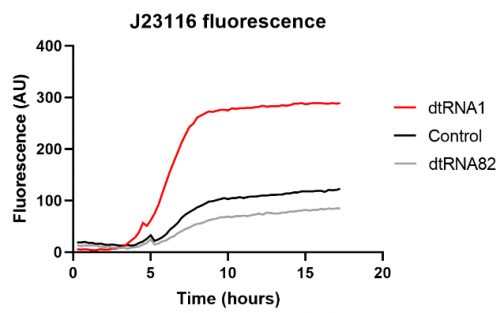 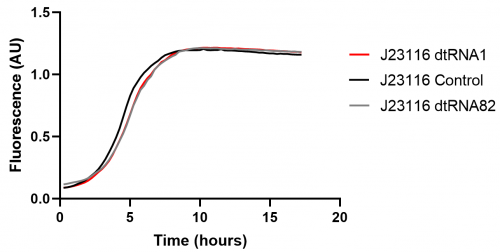 We clearly see that introduction of dtRNA1 enhanced GFP fluorescence to nearly 3 folds, but the growth curve remains nearly unchanged. Therefore, we successfully improve this part by adding a small RNA structure in front of its RBS. The integrated version could be further used for inter-lab studies or measurement of dtRNA strength in different labs or contexts.