Not Released
Sample In stock
Experience: None
8 Uses
10 Twins
Get This Part

This is a GFP expressing constitutive device for the 2017 iGEM InterLab study. It is called Test Device 1 for the study for easy reference.

This device is stored in pSB1C3 for the InterLab and is fully BioBrick compatible.

We used three different strains of transformed E. coli (Top10,BL21 and BL21 Star) for this study. Transformed strains were incubated in 15 mL LB broth 37 oC overnight. Next day they were used to inoculate a 50 mL LB to OD600=0.1. The cultures were then incubated at 37 oC, 140 rpm and samples were taken every 4 hours for 2 days to determine the green fluorescence protein (GFP) fluorescence intensity at 510 nm. 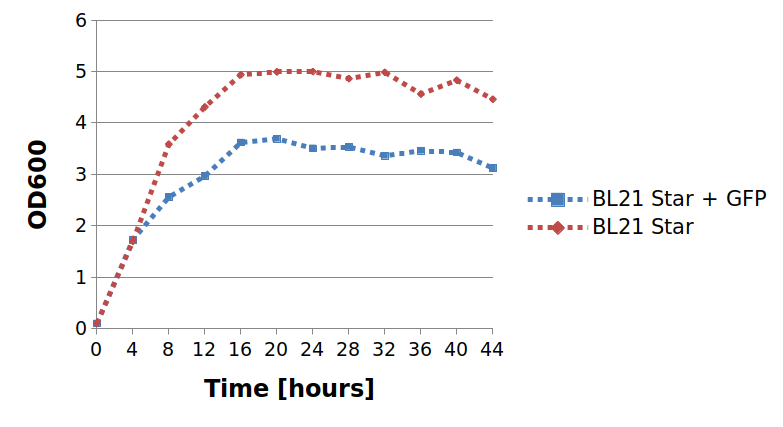 This year, we improved this reporter device (BBa_J364000) into a surface display system (BBa_K3034007) (Fig. 1) by fusing GFP with INPNC (BBa_K523008). The improved system can anchor the downstream protein of INPNC to the surface of bacteria, while the GFP is used as the reporter gene. So, other teams who have the need of surface display can insert their target gene into this system.

Ice nucleation protein (INP) is a secretory outer membrane protein from Pseudomomas syringae, P.flurorescens and several other Gram-negative bacteria. INP can anchor one or more "passenger proteins" to the outer membrane of bacteria. The fixation of exogenous proteins on the bacteria surface through INPNC can not only greatly improve the efficiency of enzymatic reaction, but also avoid the degradation of exogenous proteins by intracellular enzymes of host cells[1].

Besides, we added a segment of linker between INPNC and GFP to ensure that two adjacent domains do not sterically interfere with one another. In our experiments, without linker, GFP could not be properly expressed. 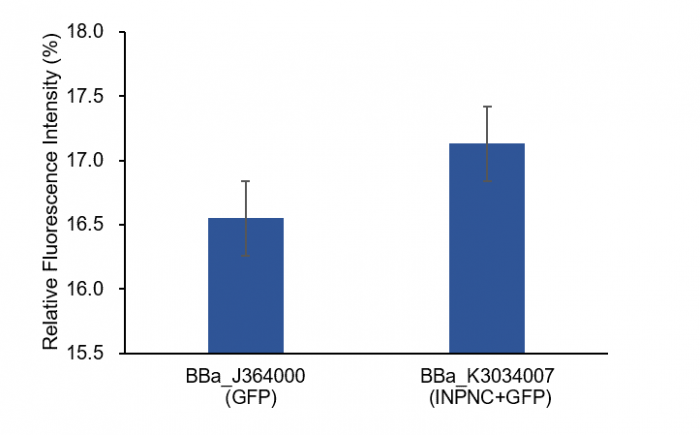 Next, we used fluorescence microscopy to see if the INPNC worked. E.coli DH5α carrying BBa_J364000 (GFP) was rod-shaped and the fluorescence was equably distributed in E.coli (Fig. 3a). The fluorescence of E.coli DH5α carrying BBa_K3034007 (INPNC+GFP) was observed to be dotted and dispersed on the surface of E.coli (Fig. 3b,3c). The results proved that GFP has apparently been anchored to the surface of the E.coli and INPNC was working.

In addition, we also noticed that E.coli DH5α carrying BBa_K3034007 (INPNC+GFP) had fluorescence aggregation on one side of the E.coli surface (Fig. 3c). The result is consistant with fact that we found in the literature[2] that the INPNC forms aggregates in the cell membrane.Thus, we are more clear that we have achieved our improvement. 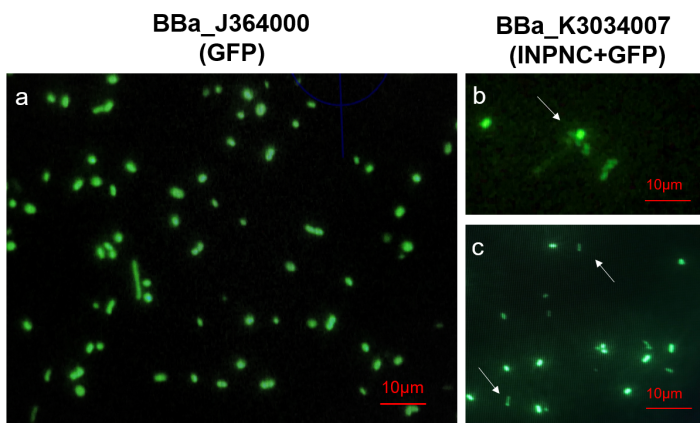 We would like to analyze the growth of E.coli via Green Fluorescent Protein (GFP). To examine the growth of E.coli in food waste, the Optical Density of E.coli is commonly used. Yet, in the presence of food waste (starch from rice as an example here), it is difficult to measure the O.D. value of E.coli growth at a wavelength of 600 nm (O.D.600), where determining the growth phase is almost impossible. Thus, we would like to use Green Fluorescent Protein (GFP) (488 nm and 510 nm) to establish a model of E.coli’s growth in food waste (starch). ====Result==== We estimate the amount of bacteria in culture by assessing the emission wavelength for fluorescence signals at O.D.510 and O.D.600. The tested samples are composed of 100ml of LB medium and 1.5ml of overnight bacteria culture. The time points measured are 0hr, 4hr, 12hr, 24hr. As demonstrated by Fig.3 (3a, 3b, 3c, 3d), samples with GFP have shown higher absorbance compared with controls of BL21. And samples in the presence of food waste (starch) have also shown higher absorbance than those without food waste (starch). Fig 3a O.D.600 of BL21 culture with starch and without starch