The pelB leader sequence is a sequence of amino acids which when attached to a protein, directs the protein to the periplasmic membrane of E. coli, where the sequence is removed by pelB peptidase. It is used to direct coat protein-antigen fusions to the cell surface. To improve the function of this part, we made the codon optimization for its efficient expression in E. coli. To express the recombinant CALB in E. coli and make its secreted, the 5’-terminal of the cDNA without its own translation start codon (ATG) was ligated to our improved Pelb (BBa_K2302005:http://parts.igem.org/Part:BBa_K2302005). The fusion protein was expressed in E. coli BL21 (DE3) using a pHisx6 vector. Then, we determined secreted CALB in the culture medium by Western blot. Compared with the fusion protein expression level in the medium, CALB fused to our improved PelB showed much higher expression than that fused with the peptide in the registry. The use of the Pelb signal sequence for secretory expression is one major improvement for the successful production of our recombinant CALB protein. The Pelb signal enabled the translocation of the CALB into the periplasm, where the protein could be correctly folded with detectable enzyme activity.

To further demonstrate whether the CALB can be secreted into the medium by the signal peptide Pelb, the supernatant of culture medium was directly detected using Western blot. Bands with predicted molecular weight of Pelb-CALB in Figure 2B were much stronger than these in Figure 2A with samples using previous Pelb#1 in the iGEM Registry, indicating that the expression of Pelb-CALB#2 was higher than that of Pelb-CALB#1. The predicted molecular weights of fusion proteins Pelb-CALB#1 and Pelb-CALB#2 are somehow slightly different, likely caused alteration in protein conformation after the codon optimization. Comparing the expression between Fig. 2A and 2B, the function of Pelb has been remarkably improved. 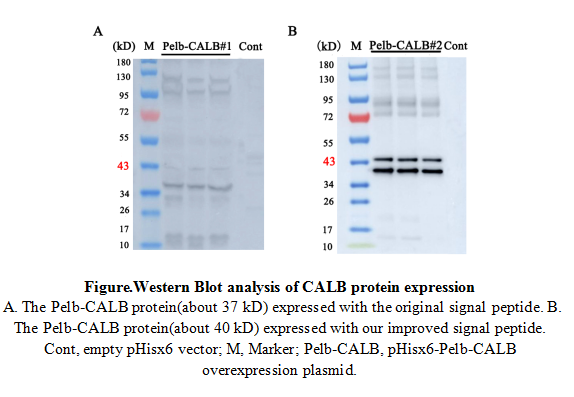 We have constructed pelB linked scFv (Single-Chain Fragment Variable) to improve the production of scFv in E.coli. The function of pelB tag is verified, which have significantly increased the productivity of our scFv. Because our scFv has cysteine in its amino acids sequence, so it need an oxidizing environment for disulfide bonds to form and correctly folding.
See more at BBa_K3593013