Not Released
Sample Not in stock
Experience: None
45 Uses
Get This Part

This is a strong synthetic E. coli ribosome binding site. It is synthesised as two complementary oligonucleotides rather than being incorporated into a biobrick plasmid. It incorporates a SacI site overlapping the XbaI site, which is preserved when it is added to any other biobrick. This allows easy detection of the RBS after it has been added upstream of a biobrick coding sequence in a plasmid vector.

Characterisation of several ribosome binding sites in order to expand upon the options and knowledge available to future iGEM teams. Of the parts characterised, this one was labeled "RBS Strong". We also characterised RBS mediumand RBS weak. 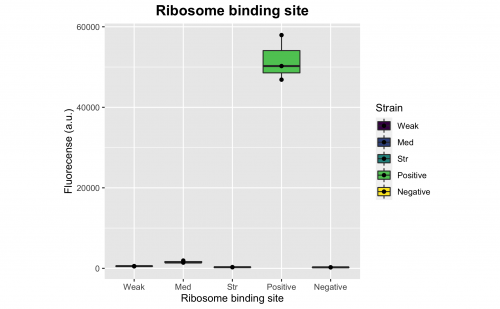 As can be seen, the strong RBS characterised here (labeled Str above) showed very weak activity, giving a signal strength of the same values as the negative control. The positive control of base pYTK001 with sfGFP gave a very strong signal, magnitudes greater than the rest. The sequencing also showed no mutations or errors in neither the RBS site nor the sfGFP sequence.

The results were contradictory to what we expected, with the RBS effectively terminating all expression of sfGFP in the cell, since it showed the same values as the negative control. There are possible explanations, but our sequencing showed no errors in the plasmid produced and used, and no other errors were noted. The other two RBS tested also showed lower values, but did show some expression compared to the negative control. We invite other iGEM teams to also characterise this part in order to further determine the nature of this RBS.