We first tested three different temperatures, being 20, 25 and 37 degree Celsius. From our fist basic measurements, we discovered that expression was more efficient at a temperature of 37 degree Celsius and continued with this setting on our incubator. The next step was consequent adding arabinose to the cultures, as E. coli BL21(DE3) is a strain that can break down arabinose, and for an optimal expression, it is better to have a high enough constant concentration. We tested an addition of every 60 minutes and every 90 minutes, with varying concentrations of arabinose. The percentages that are depicted in the figures are the total concentration of arabinose in the whole culture. The indication half means that we added 50% of the original added amount of arabinose compared with the first addition. This was done because we expected that a higher initial dose was needed to induce the expression, but that not all added arabinose would be broken down, and we therefore didn't need to add a high amount of arabinose.

The results of all our tries are depicted in Figure a1 & a2 with the best results in a3. 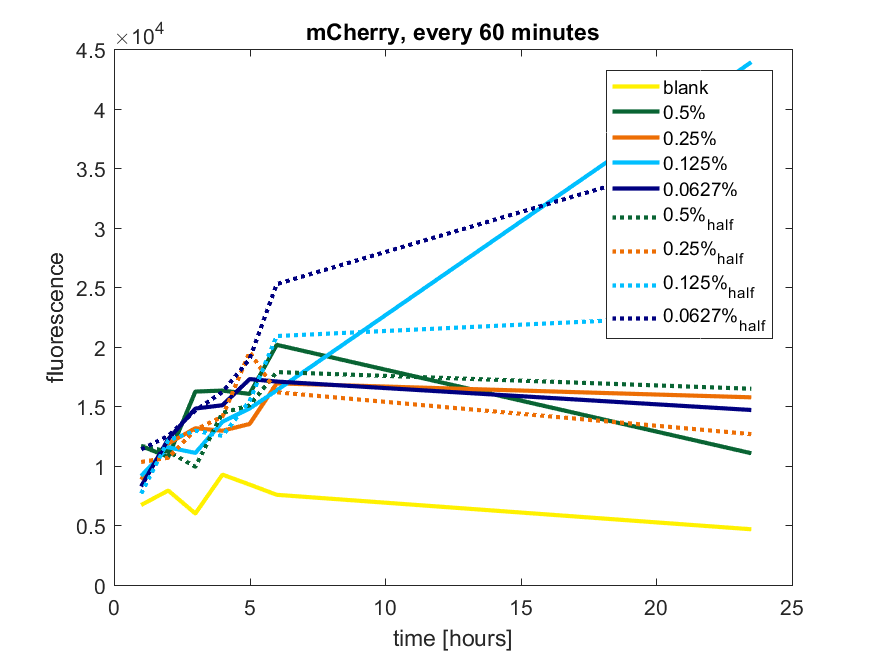 Figure a1: pBAD expression of mCherry in BL21(DE3) with every 60 minutes an addition of arabinose 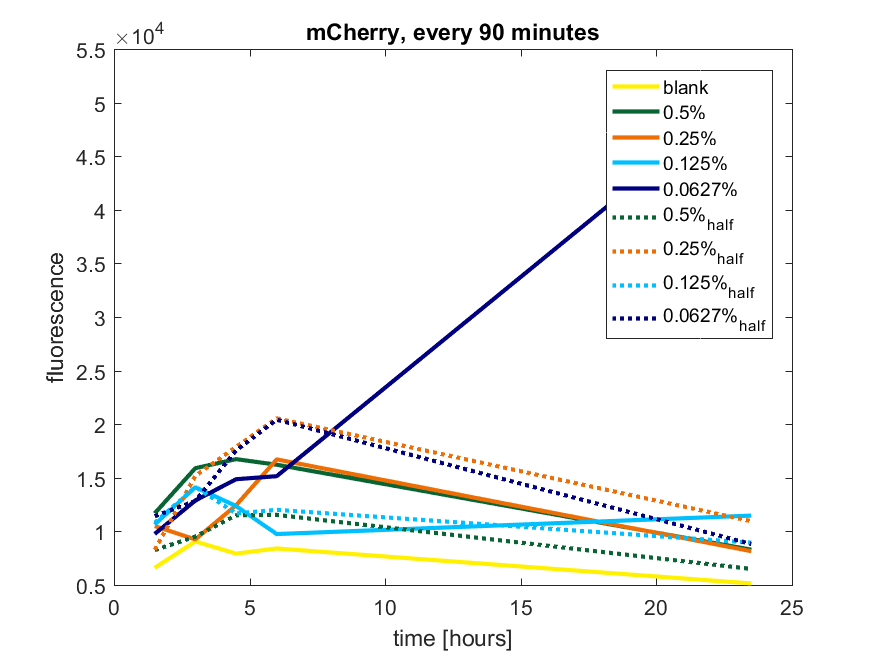 Figure a2: pBAD expression of mCherry in BL21(DE3) with every 90 minutes an addition of arabinose 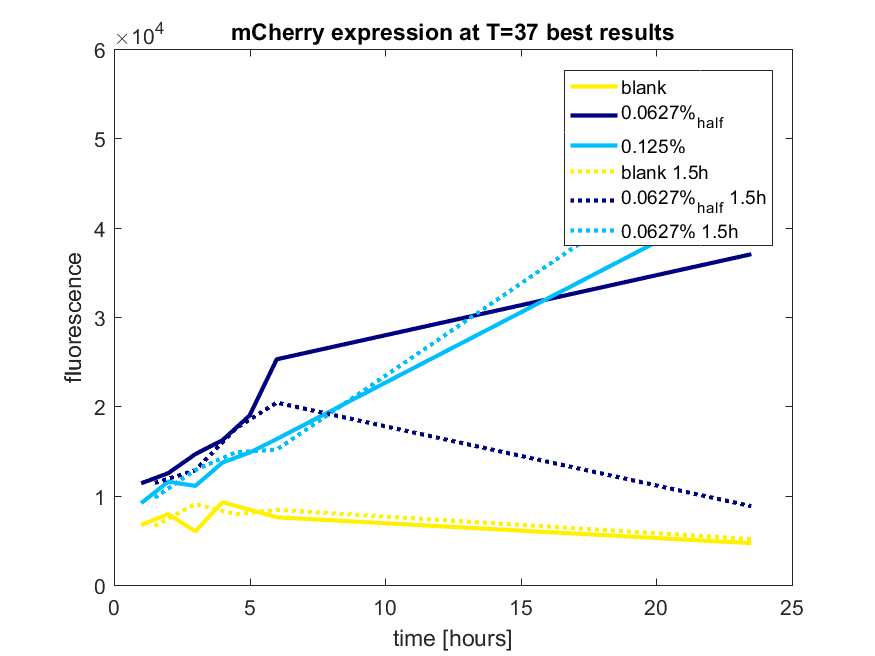 Figure a3: pBAD expression of mCHerry in BL21(DE3) most successful addition methods

The results of all our tries are depicted in Figure b1 & b2 with the best results in b3. 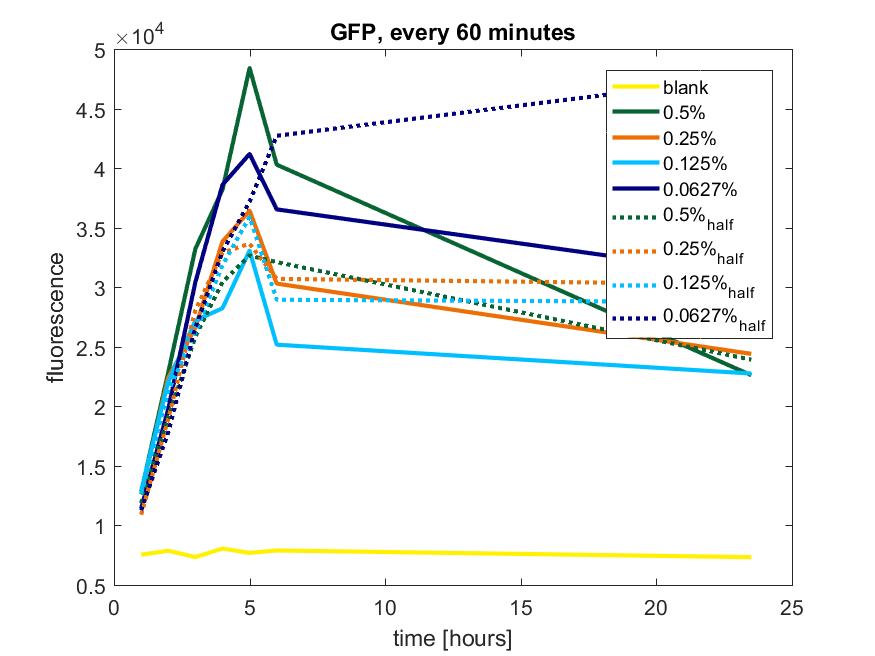 Figure b1: pBAD expression of GFP in BL21(DE3) with every 60 minutes an addition of arabinose 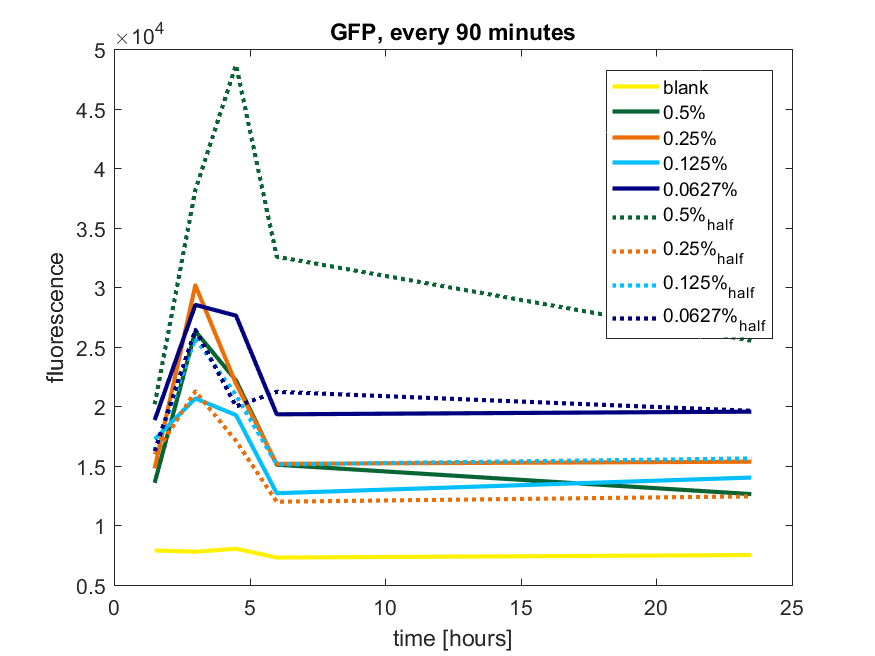 Figure b2: pBAD expression of GFP in BL21(DE3) with every 90 minutes an addition of arabinose 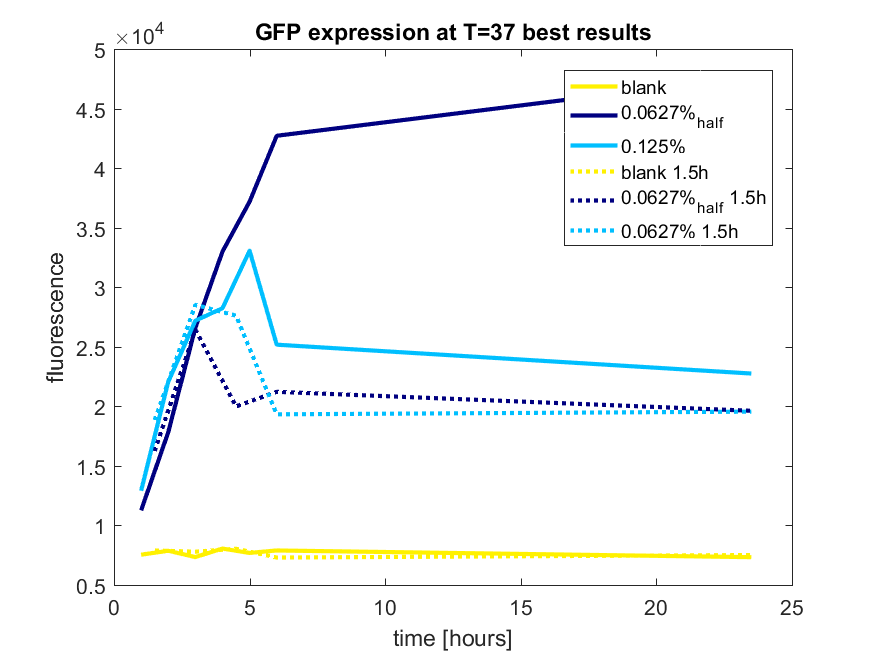 Figure b3: pBAD expression of GFP in BL21(DE3) most successful addition methods

The best results are depicted in Figure c. 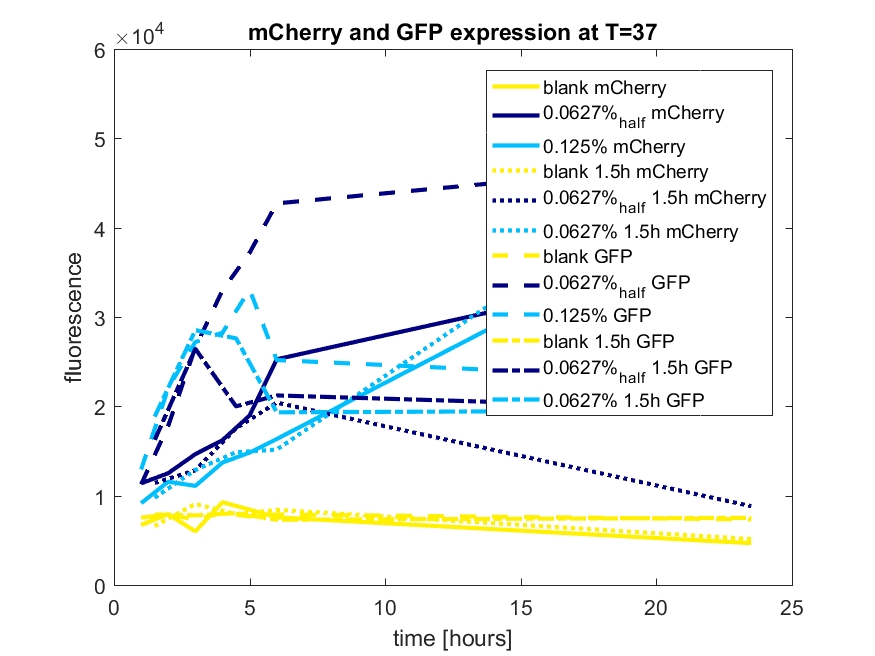 We first cloned promoters in front of the gene of the fluorescent protein mCherry (BBa_K3962339 and BBa_K3962340) for the calibration. The result showed constant expression from p2547::mCherry and the expression from pBAD::mCherry increased gradually as the concentration of arabinose increased (Figure 1). The lowest fluorescent protein expression was observed at the concentration of 0.00032% (w/v). We also concluded that pBAD is tightly regulated as it showed low leaky expression when no arabinose was added. 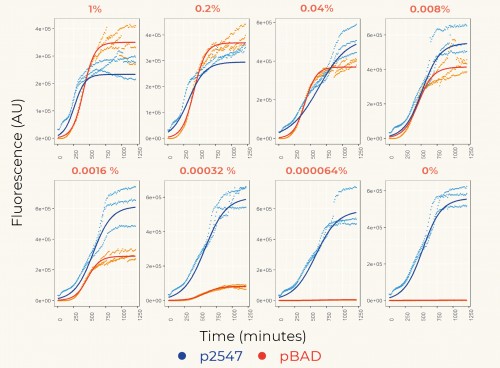 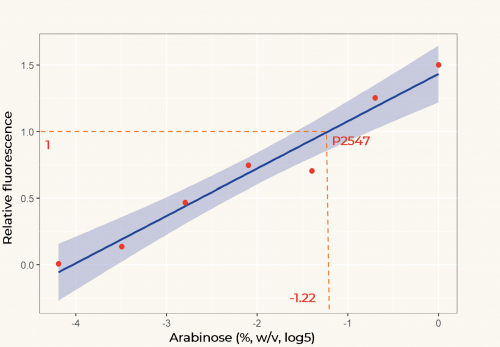 To assist future iGEM teams in the usage of these promoters for regulation and prediction of synthetic circuitry, a table with arabinose concentrations causing equal expression of promoters in Anderson’s constitutive promoter collection was made.

The reason we choose to use pBAD was because we planned to do a double transformation, which required different antibiotic resistance and different promoters. 
This part contains an arabinose operon, which constitutes the arabinose sensing system. We added the ccdB gene downstream of the pBAD promoter which allows for CcdB protein expression in the presence of arabinose involving poisoning of DNA-topoisomerase II complexes.

Fig.1 The arabinose to specifically turn on the kill switch in engineered bacteria

We measured the OD600 of each sample to measure intact bacteria counts. We cultured the strain at 37°C overnight, obtained the bacteria by centrifugation, resuspended the bacteria in centrifuge tubes containing LB medium with different concentrations of arabinose (0%, 0.05%, 0.10%, 0.15%, 0.20%). We then added the resuspended bacteria to the corresponding concentration of arabinose medium to make a final volume of 20 mL, and measured the initial OD600. Samples were taken once every hour to measure OD600. And the diluted bacterial solution was spread on solid LB-kanamycin medium, incubated at 37°C overnight for the colony counting. 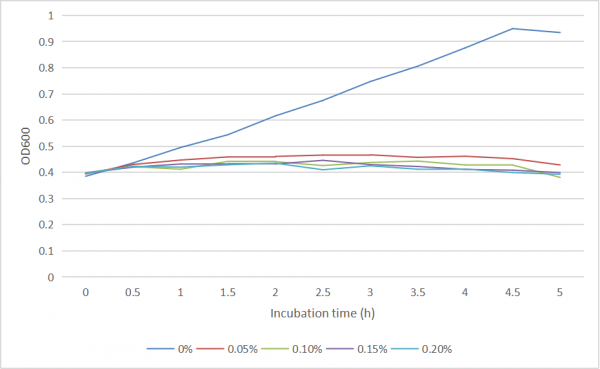 The growth of colonies is shown in Fig. 3: 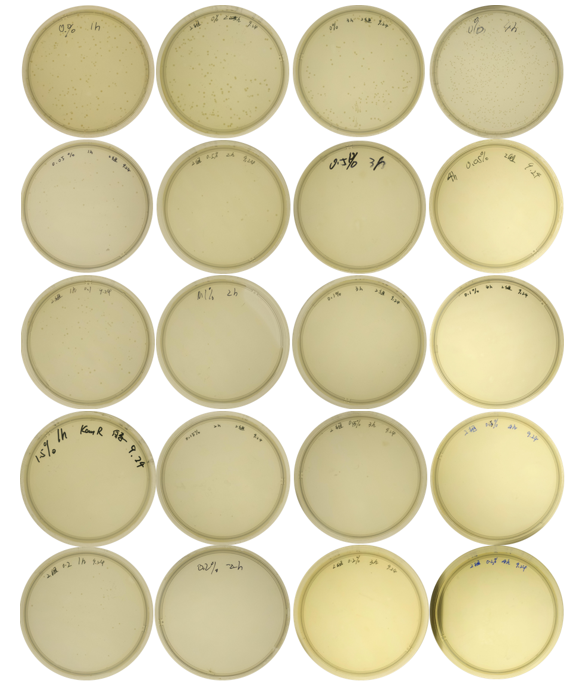 And the cell number was concluded as CFU and graphed in Fig. 4: 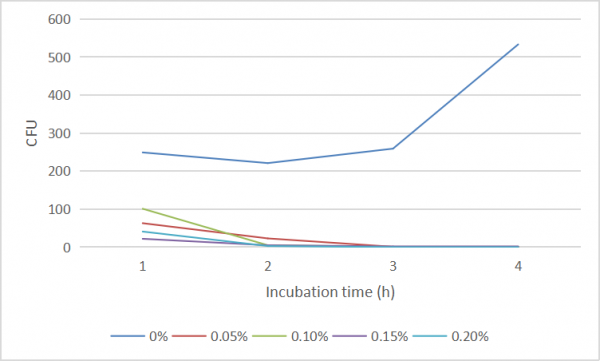 Fig.4 The CFU of E. coli DH5α under arabinose

We found that 0.1% concentration of arabinose was the most effective in killing cell, so we measured the effect of DH5α suicide induced by 0.1% arabinose. We took samples every 15 minutes at 0.5-1 hours when the bacterial concentration was rapidly decreasing, and every half hour for the rest of the time. The samples were diluted and spread on solid medium and counted for colonies, then we have the colonies shown in Fig. 5. 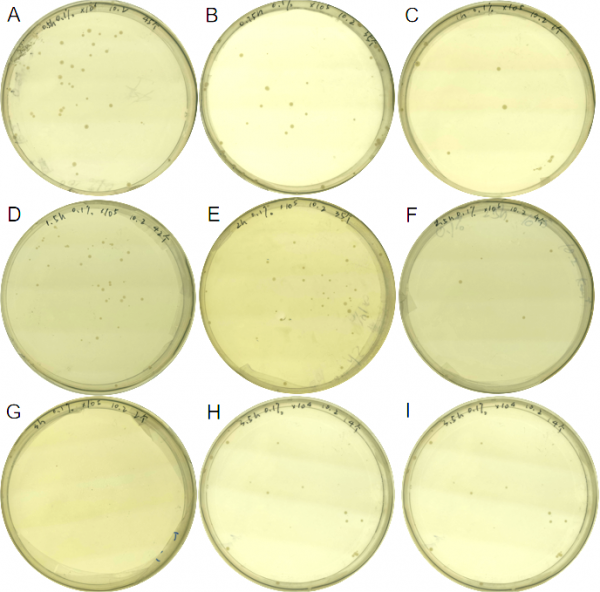 The colony numbers were collected and shown in Fig.6: 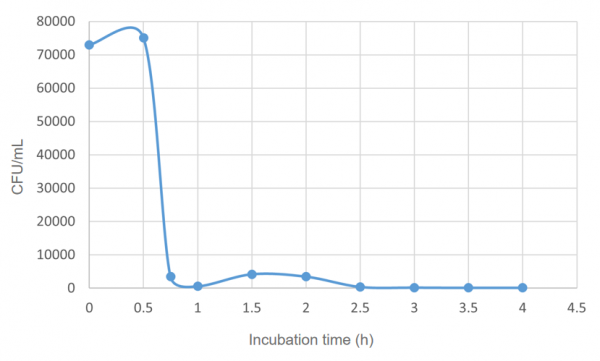