This S-layer fusion protein is used to characterize purification methods and immobilization behaviour of enzymes fused to an S-layer.

The SgsE gene under the control of a T7 / lac promoter (BBa_K525303) was fused to firefly luciferase (BBa_K525999) using Freiburg BioBrick assembly for characterization experiments.

The SgsE|luciferase fusion protein was overexpressed in E. coli KRX after induction of T7 polymerase with 0.2 % L-rhamnose and induction of lac operator with 1 mM IPTG.

The following cultivation was carried out in a Bioengineering KLF bioreactor with Bioengineering DCU and software. A sequencer which automatically pumped an inducer solution after 4 h cultivation time to start protein expression was implemented. Other parameters were:

The following figure shows the expression of the SgsE | luciferase S-layer fusion protein BBa_K525311 in E. coli KRX in HSG medium with autoinduction sequencer as described above. Optical density, activity of the fused luciferase, dissolved oxygen and agitator speed are plotted against the cultivation time.

Error creating thumbnail: Invalid thumbnail parameters
Fig. 1: Bioreactor cultivation of E. coli KRX expressing the fusion protein SgsE :: luciferase BBa_K525311 under the control of a T7 / lac promoter. Induction with 1 mM IPTG and 0.2 % L-rhamnose after 4 h controlled by sequencer. Cultivation in Bioengineering KLF bioreactor with 2.5 L HSG medium with 20 mg L-1 chloramphenicol starting with OD600 = 0.4. Dissolved oxygen was regulated to 60 % airsaturation (controlled with stirrer cascade starting with 200 rpm) and the pH to 7.0 (controlled with 20 % phosphoric acid and 2 M NaOH). The dissolved oxygen sensor had to be recalibrated after about 140 min.

After the analysis of cultivations with expression of SgsE | luciferase fusion proteins, different cell fractions were analyzed. It could be seen that the proteins form inclusion bodies in E. coli but that there are some soluble proteins left. This has the advantage that the proteins carrying an enzyme as fusion proteins do not have to be treated with denaturating agents like urea which destroys the enzyme (data not shown).

To capture the protein from the cell lysate an ion exchange chromatography (IEX) was carried out (binding with pH 7.0, 25 mM NaCl, quaternary amine beads, elution with 100 mM NaCl). A lot of protein was found in the flow-through. When concentrating and rebuffering the proteins with PES (polyethylene sulfone) membranes a lot of protein was lost. The S-layer proteins stuck to the membrane. Some could be removed again from the membrane after cutting out the filter and incubate it in ddH2O over-night. This problem has to be kept in mind when using this S-layer.

The results of the purification approach are shown in Fig. 2: 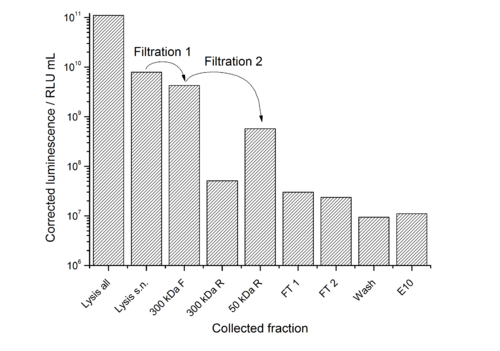 Fig. 2: Luminescence corrected with the volume of the collected fraction plotted against the fraction during purification of BBa_K525311. Abbreviations: s.n. = supernatant, F = filtrate, R = retentate, FT = flow through, E10 = elution with 100 mM NaCl.

The purification strategy has to be improved. The inclusion bodies cannot be purified because urea damages the luciferase irreversible (data not shown). The loss due to adsorption of the SgsE | luciferase fusion protein to PES membranes could be avoided by using different membranes. The binding conditions of the IEX have to be improved as well. Anyway, the idea behind this purification strategy could be a starting point for a better strategy. Possibilities for improvement are:

To test whether the S-layer protein enhances the half-life of the firefly luciferase, immobilization experiments were carried out. After the IEX described above, the elution fraction was immobilized on silicon dioxide beads or just diluted with HBSS buffer which is used for the immobilization / recrystallization of SgsE S-layer proteins. The immobilization is carried out at room temperature for 4 h. It could be seen that the luciferase activity nearly expired during this time (in the positive and the negative control). So the S-layer SgsE could not stabilize the luciferase at room temperature. The results of this experiment is shown in the figure below: 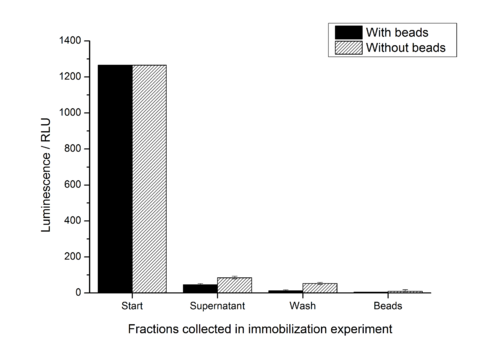