Brazzein is a sweet-tasting protein that is found in the Western African fruit, the Oubli (Pentadiplandra brazzeana). The protein consists of a 54 amino acid sequence. It is sweeter than sugar and is used as an alternative low calorie sweetener.

We characterized[1] expression of the YFP-tagged version of this part in E. coli. BBa_K382041

BBa_K382020 is an Arabidopsis codon-optimized version of brazzein. We characterized expression of YFP-tagged versions in E. coli. The C-terminal 2xYFP tagged version has been submitted to the registry (BBa_K382041). 2xYFP-tagged brazzein was expressed from a IPTG-inducible Novagen Duet vector that was adapted to the BioBrick standard (described in Agapakis et al., JBE, 2010).


The graphs below show IPTG-induction of brazzein over time in E. coli liquid cell culture (red line) compared to uninduced cultures (blue line). 2xYFP tags were attached to either N- (panel C) or C- terminus (panel D) of brazzein to ensure that YFP position had no influence over expression. In all cases relative brazzein expression (indicated by YFP fluorescence) had appreciably increased after 120 minutes as compared to the non-induced E. Coli.


Note: Panels (A) and (B) show similar characterization of another flavor protein, Arabidopsis codon-optimized miraculin. 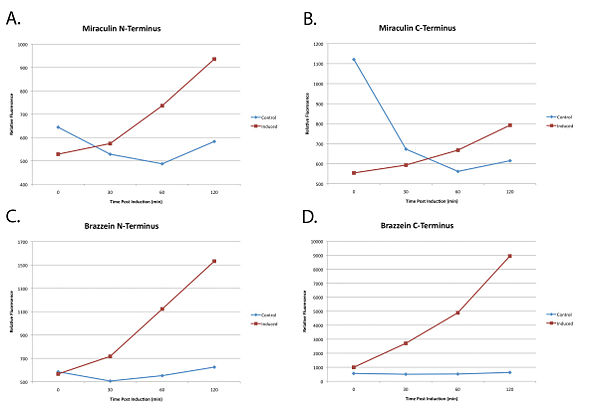 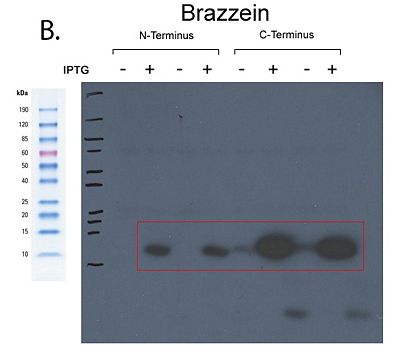 Confirmed function: We have confirmed that the BioBricked Arabidopsis codon-optimized brazzein protein can be tagged with YFP or strepII and expressed from an IPTG inducible promoter in E. coli. Due to safety restrictions, the sweet taste of brazzein expressed from E. coli has not been tested. Continued work will allow us to produce brazzein in form that is safe for taste testing.


If you are considering producing and testing brazzein yourself, please consult your local bio-hazard/ bio-safety organization for guidelines on producing brazzein that is safe to consume.