This biobrick contais two parts. The first one is Nanoluc luciferase, which is from iGEM2015_Tuebingen BBa_K1680009. The NanoLuc is smaller than other luciferases while yielding equal or stronger luminescence readings. We have optimized it in yeast. The second part is a tag named PEST. PEST sequence can be found in variety of eukaryotic cells and the sequence we used was from the literature Engineered Luciferase Reporter from a Deep Sea Shrimp Utilizing a Novel Imidazopyrazinone Substrate. The covalent linkage of ubiquitin to lysine residues of substrate proteins is a common means used by eucaryotic cells to signal their degradation by the 26S proteasome, a multiprotease complex located in the cytoplasm and the nucleus. Decades ago it had been demonstrated that the PEST regions, enriched with Pro, Glu, Ser, and Thr, were identified to indeed control the ubiquitination of regulatory short-lived proteins.

Inspired by our time-course measurement for the KaiABC oscillatory system, we realized the importance of the sensitivity of reporter genes when used to characterize the variation in our engineering strains. With the knowledge that the instability of proteins is associated with the existence of the so-called PEST regions, which control the ubiquitination of regulatory short-lived proteins, we decided to optimize our NanoLuc with the potentially degrading sequence PSET to shorten its intracellular lifetime.

As shown in the data image, the NanoLuc was expressed and degraded successfully as we expected which embodied that the mark PEST also worked. 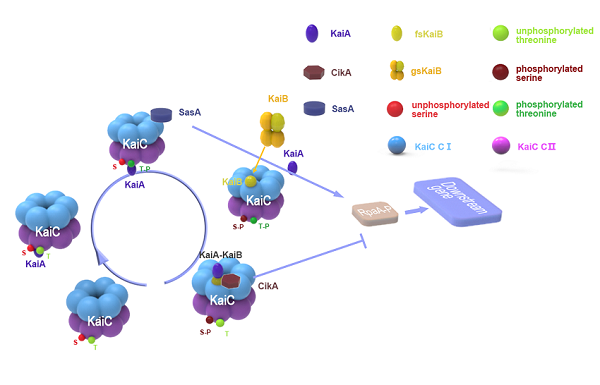 Figure 2. Mechanism figure of our project 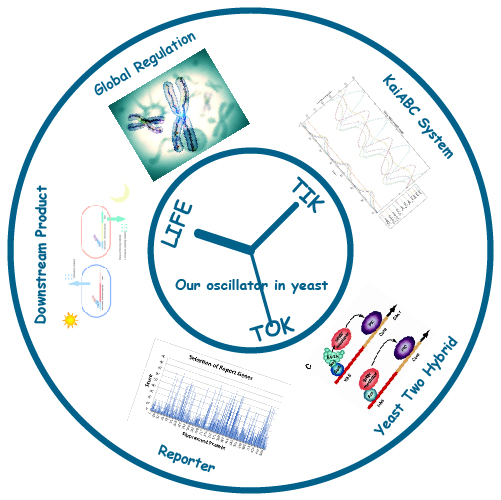 We aim to integrate the KaiABC system into Saccharomyces cerevisiae BY4741, and have it control circadian rhythm in yeast. To do this, we have designed three plasmids which can be transformed into yeast to produce a oscillation system and characterized the protein interactions by yeast two-hybrid system. You can learn something about yeast two-hybrid system by clicking here. The first plasmid expresses KaiA, KaiB and KaiC which is fused to a Gal4 activation domain. The second plasmid is our reporter plasmid, which has fluorescent protein promoted by mutant Gal1p and luciferase promoted by Gal2p. The third plasmid contains CikA, SasA and RpaA. We respectively link a Gal4 binding domain with CikA or SasA to find the suitable binding protein that can characterize the oscillation. To explore more protein interactions, KaiB and KaiC were also used as proteins in the yeast two-hybrid system to construct a new oscillation system.These systems would conclusively show that the KaiABC system can work normally in yeast, which serves as a proof of concept for placing eukaryotic gene expression under the control of an exogenous circadian clock. In addition, to make sure that Gal1p and Gal2p can only be activited after the combination of proteins, we deleted two genes in wild-type BY4741. They are Gal4 and Gal80, which can activate or repress Gal1p and Gal2p, respectively. The principle is explained in yeast two-hybrid. And then, we deleted gene BarI to solve the problem of desynchronization between different generations of yeast.

When we start to measure the datas of experiment group, we set up some control groups at the same time. To prove that our oscillator works surely because of the yeast two-hybrid system, we constructed some bacteria in which there are only one fusion protein of yeast two-hybrid system and a reporter gene or a combination. And we choose 3 or 4 reporter genes as parallel experiment groups. The following figures are the results we measured with live Nanoluc. 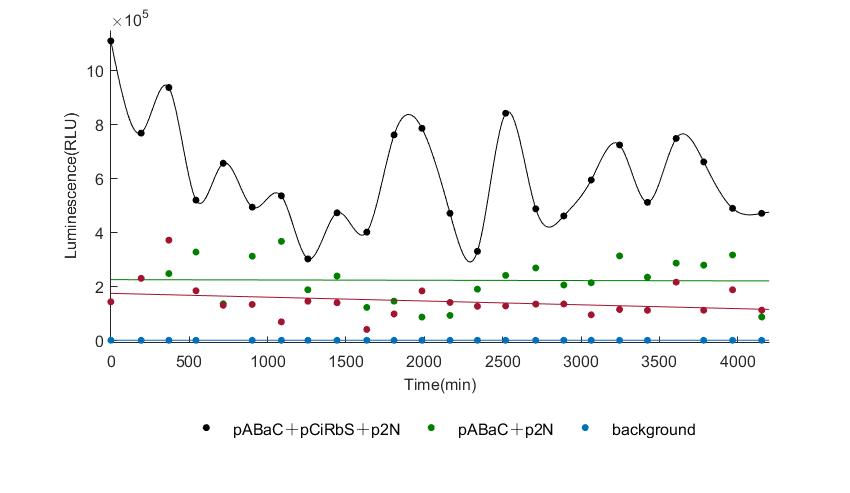 Figure 4. The result of oscillator measured by the 1st live Nanoluc reporter together with the control groups 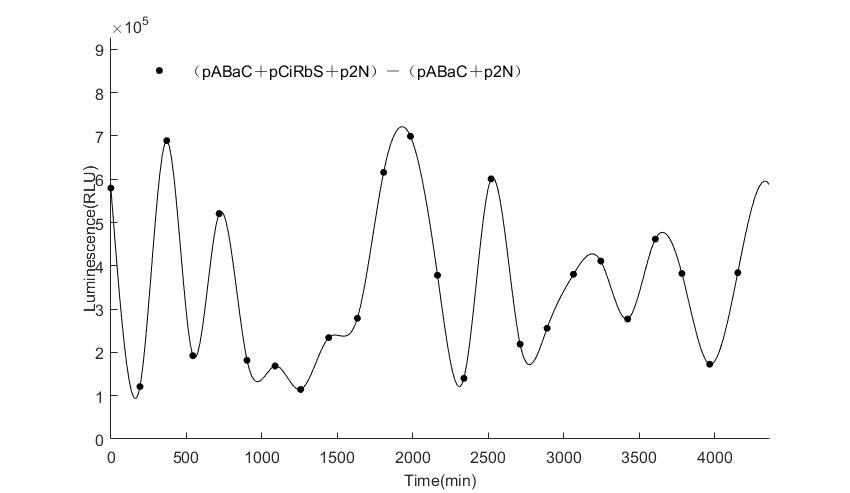 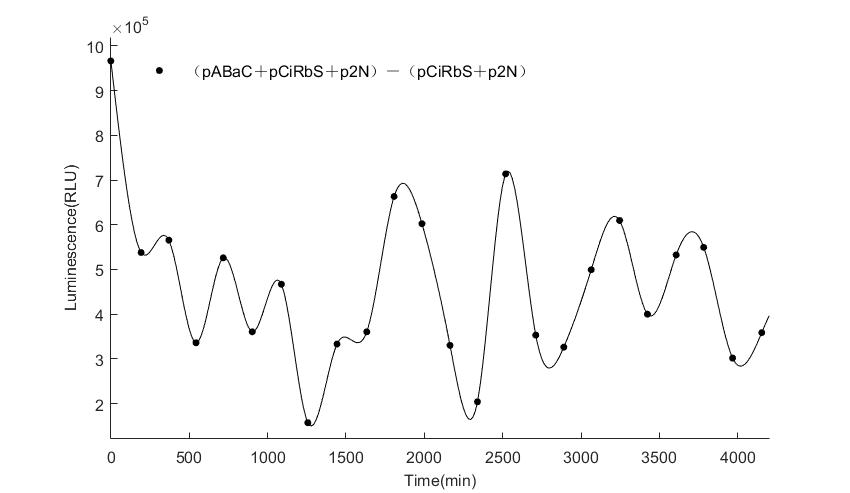 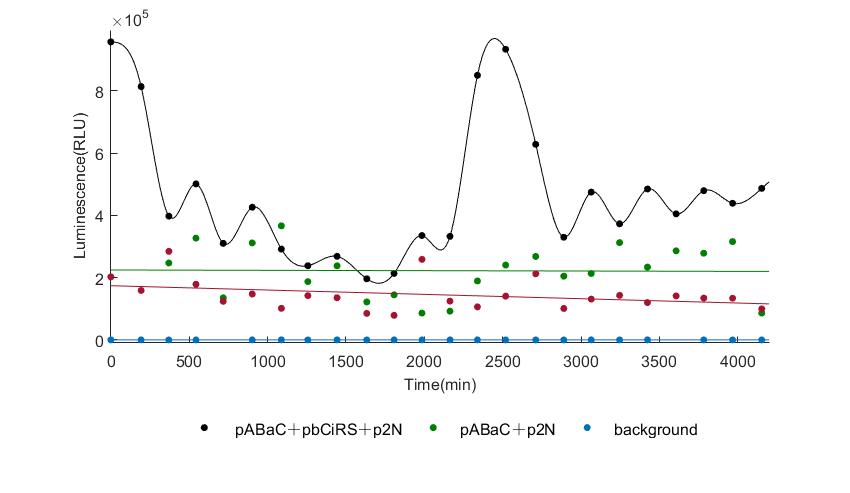 Figure 7. The result of oscillator measured by the 2nd live Nanoluc reporter together with the control groups 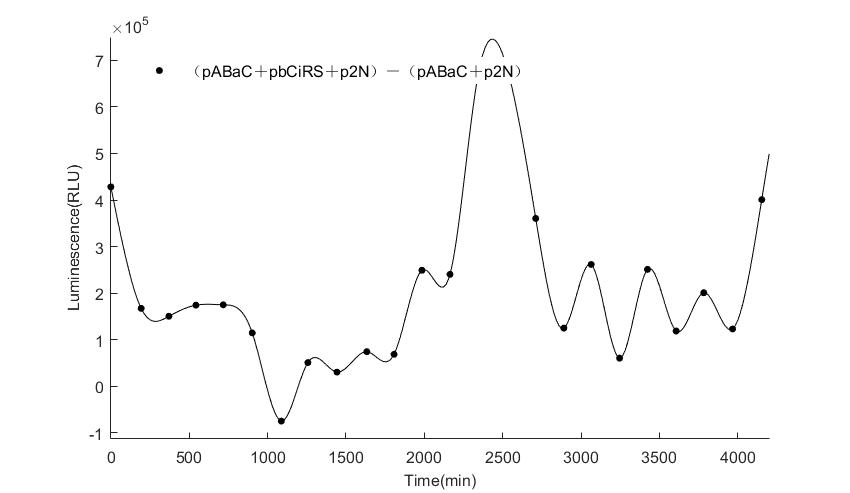 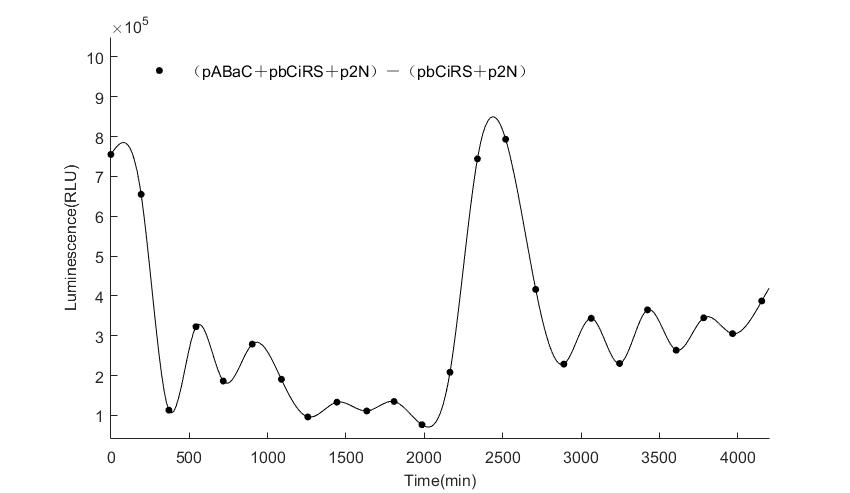 In the figures4-6, pABaC is the plasmid with AD-KaiC fused gene and make up a yeast two-hybrid system with the plasmid pCiRbS, which is with BD-CikA fused gene. p1F is the plasmid with Nanoluc reporter whose promoter is Gal2. In Figure.4, the experimental group have black datas and the first control group and the second group have green and red datas, respectively. We substracted the control groups to gat a more objective result. As we predicted and looked at the results in other literatures, this oscillatory system is unstable.However, even though the fluctuations are not obvious on the second day, better waveforms could be observed on the first and third days.In addition, on the third day we get very high peak values, and in the wave trough experimental report gene expression is closer to the control group and the blank group, this indicates that in subjective day, yeast two-hybrid system works and results the peak value, in subjective night, it doesn't work and causes the similar results to the control groups and the background. Therefore, the overall experimental results show that we successfully reconstructed the oscillator in yeast.