This is the coding region of a small antifreeze protein. The antifreeze protein used in this project is normally produced by an insect, the Spruce Budworm, Choristoneura fumiferana. It works by binding to the ice crystals as they form inside the cell, and by doing so prevents the ice crystals from enlarging and penetrating the cell membrane. Through Uniprot we found the amino acid sequence of the protein, where it had the entry name Q9GTP0⁠. We then converted the sequence of amino acids into DNA codons. This DNA sequence were then codon optimized for expression in Physcomitrella patens. Lastly, we sent the DNA sequence to IDT where the gene was synthesized.

We transformed this gene into Physcomitrella patens as a part of a larger DNA construct (fig. 1). This DNA construct contained in the following order. A homologous region to the 108 locus on the moss genome (to ensure stable integration into P. patens genome), a nptII-resistance cassette, the Zea mays ubiquitin promoter driving the antifreeze protein (AFP) linked to yellow fluorescent protein (YFP) with the LP4 linker sequence, terminator and lastly another 108 region.

A few days after transforming this gene construct into P. patens protoplasts we observed YFP expression in several moss protoplasts. This confirms that our transformation was successful and highly suggests that our antifreeze protein is expressed. One month later, we had small clumps of moss still expressing YFP (fig. 2). This suggest a stable integration of our construct and expression of the antifreeze protein in a stable line of transformed P. patens. 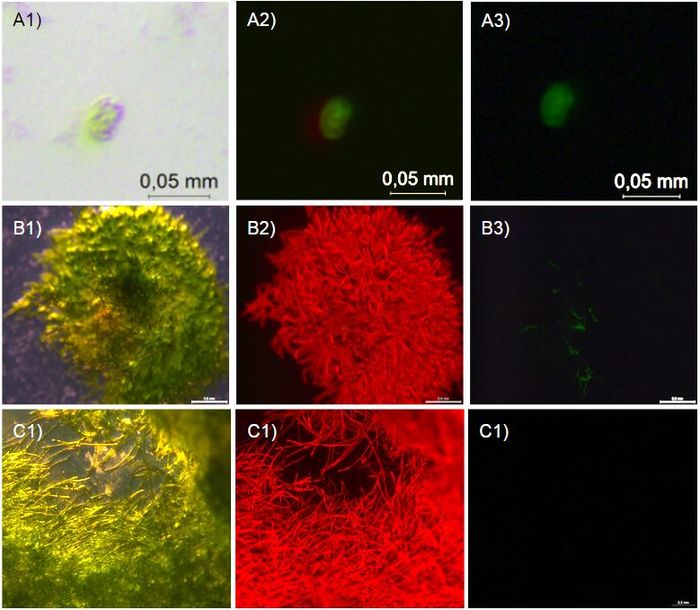 While the presence of YFP in the transformed antifreeze moss suggest expression of the antifreeze protein, the question remains if the antifreeze protein improves the moss ability to survive cold temperatures. To answer this question, we filled our self designed PhyscoFreezer (see UNIK copenhagen 2015 wiki for more information) with dry ice and put a plate containing 3 transformed clumps of P.patens and a plate of WT moss straight down into the dry ice. From arduino we got a consisting reading of nearly -60*c and we left the box overnight. The next day the PhyscoFreezer still contained dry ice and we replated our transformed on moss on new PhyB-media. We also took 3 equal sized clumps of WT moss and put them on new PhyB-media. After 7 days both WT and antifreeze moss looked brown and withered. However, under a fluorescent microscopes, a number of differences were observed. First, the wild type moss clumps looked amorphous and with the rhizoids in a collapsed mass (fig. 3 A1), while the antifreeze moss clumps seemed to have conserved their structure. Secondly, what seems to be cells still containing living chloroplasts were observed on one of the antifreeze clumps. The small concentrations of green colour can be seen with UV-filter (fig. 3 B1/C1) and red autofluorescence can be seen with 480/40 nm excitation and 510 nm emission (fig. 3 B2/C2). This suggest a few, still live cells. The same bright autofluorescence and green colour was not observed for the frozen WT moss. 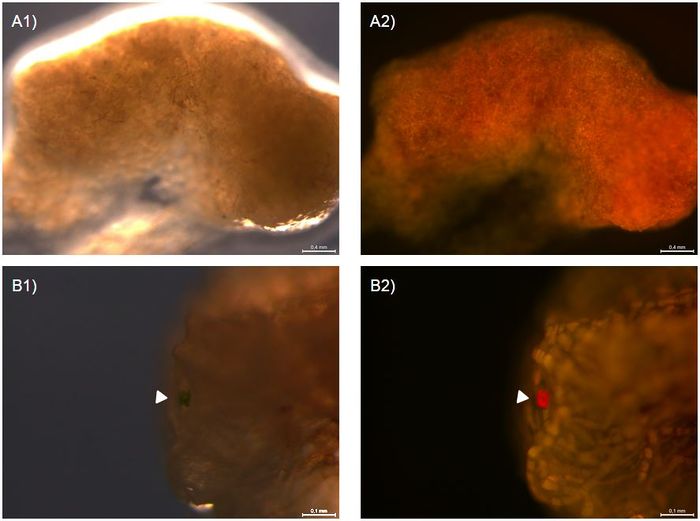 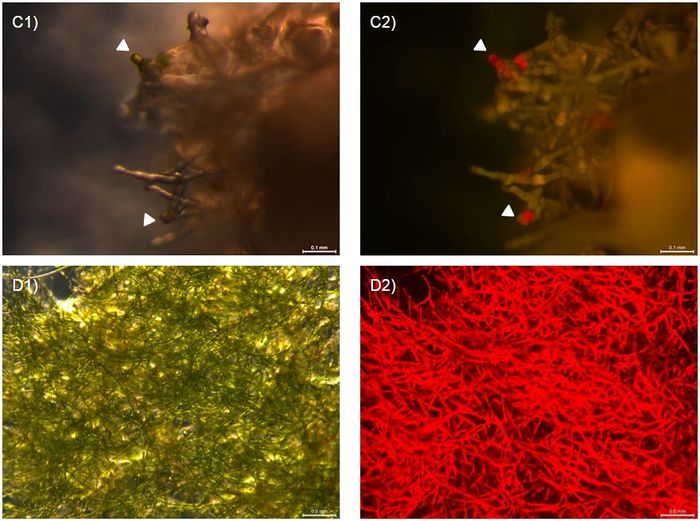 Figure 3: Results of freeze experiment at nearly -60*c in dry ice. A) WT moss 7 days after being frozen. B and C) Moss transformed with the UNIK antifreeze gene 7 days after being frozen. White arrowheads indicate green colour or autofluorescence D) WT moss that has not been frozen. For reference with same microscope settings. 1) UV filter 350/50 excitation and 420 emission. 2) GFP2 filter with 480/40 excitation and 510 emission.

In addition, a similar experiment were conducted but only at -20*c in a normal freezer for 8 hours. 2 days after, strong autofluorescence was observed in one clump of antifreeze moss but not in WT (fig. 4 A2/B2). This suggests that part of the antifreeze moss was still alive. 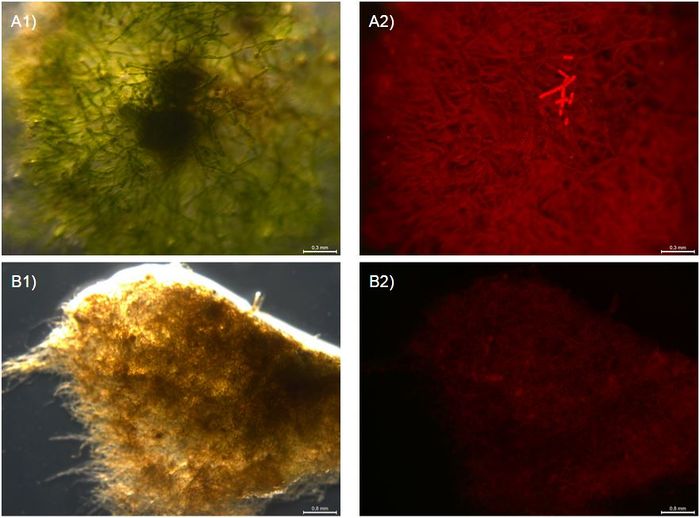 While these results are not conclusive, they suggest a slight increase in the survivability of transformed moss after being frozen at -20*c and -60*c. This increase in survivability could be due to the UNIK antifreeze gene. 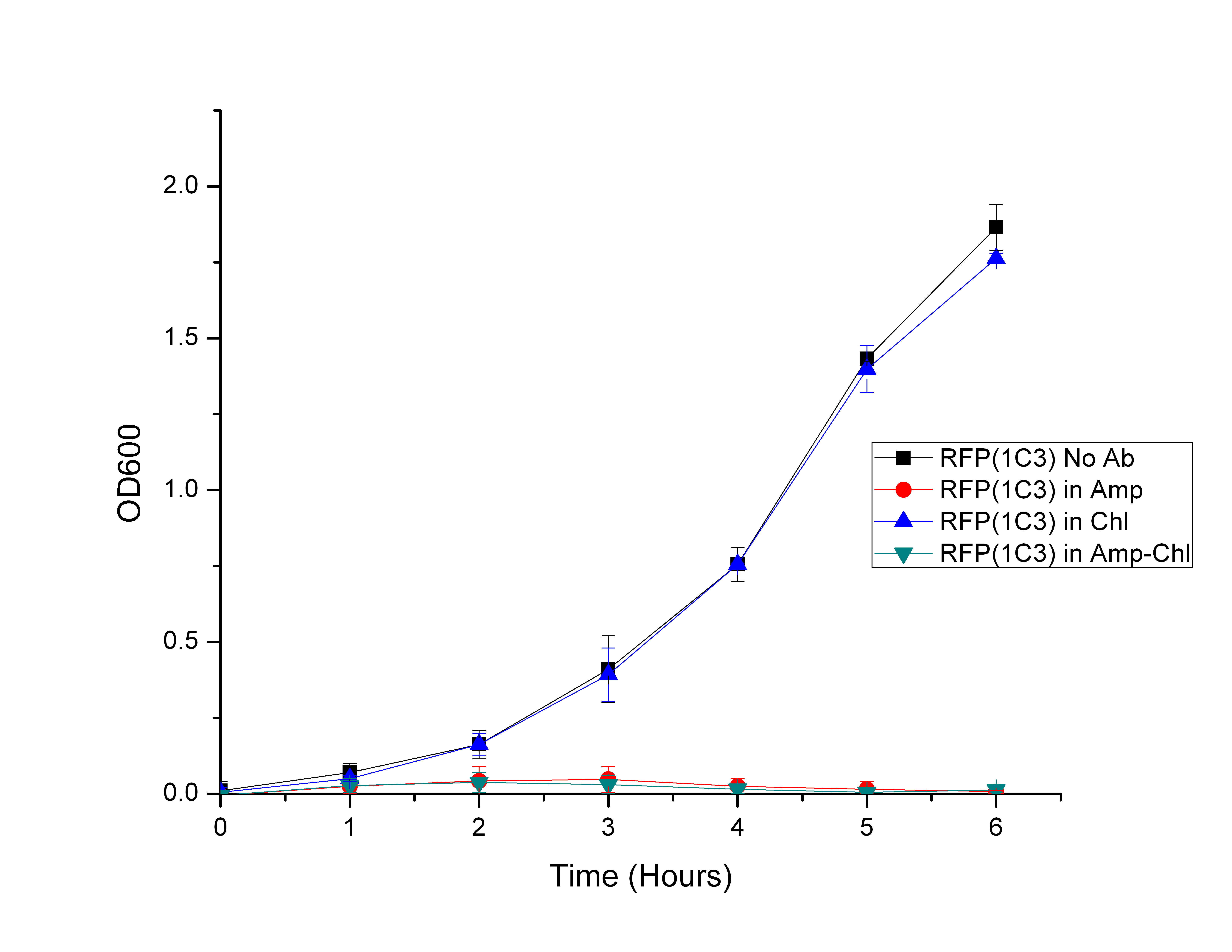