This part is the Amino Half of GFP with termination codon

BiFC analysis has been used to study interactions among a wide range of proteins in many cell types. The study of interactions and post-translational modification of the protein makes people master the biological regulatory mechanism more. Interactions in protein are also highly valued, so there have been a number of related technologies having different characteristics and applications[1-2].

Such as GFP, after the sequence of certain sites in interchanges with the amino-terminal or carboxy-terminal sequence loop, it could still be able to fold correctly to form the structure of the chromophore and maintain fluorescence properties[3-5]

In our project, we plan to fuse the GFP1 to the C-terminal of TALE1 protein. However, the sample of BBa_ I715019 provided by the 2015 DNA distribution does not have a termination codon on its 3’ terminal to stop the translation. To fix this, we designed a pair of primers to add a termination codon on the 3’ terminal of BBa_ I715019 to further extend its usage. 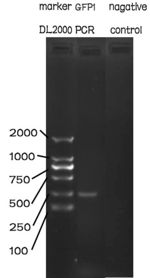 The plasmid was cutted in a 20μL system at 37 ℃ for 2 hours. The Electrophoresis was performed on a 1％ Agarose glu.

The result shows that this part can shine with GFP2.