Gold-specific binding protein (GolB) is a gold-binding chaperon discovered in S. Typhimurium which has been verified that the display of GolB on E.coli cell surface permitted selective enrichment of gold ions from media containing various metal ions.

Certain living organisms usually have mechanisms for maintaining homeostasis and resistance to heavy metal ions including gold. This offered an opportunity for genetically engineered microorganisms applied to gold detection and absorption. The MerR family is such a group of bacterial transcriptional regulators that respond to environmental stimuli such as heavy metals. GolS, a member of the MerR family presented in S. typhimurium, which shows sequence similarity with the E. coli and Salmonella CueR, had been demonstrated to be with high specificity for recognition of Au salts without cross-detection and helps the bacteria adapt to survive in Au-rich environments. And golB, a small neighbouring gene which codes for a putative gold-chaperone that is induced by GolS in the presence of Au ions, had also been verified.

Gold-specific binding protein (GolB) is a gold-binding chaperon discovered in S. typhimurium which is less than seventy amino acids in length. It has been verified that the display of GolB on E.coli cell surface permitted selective enrichment of gold ions from media containing various metal ions. The following figure shows the genetic organization of the gol locus in the S. typhimurium LT2 genome.

Figure 1(a).Genetic organization of the gol locus in the S. typhimurium LT2 genome.

we heterologously expressed the gold-binding chaperon GolB gene from S. Typhimurium into Bacillus subtilis. Hence, we displayed GolB on Bacillus subtilis biofilm or its spore surface to construct a whole-cell absorption specific for gold, which is able to be easily recovered and therefore is good for application outside of laboratory settings. What’s more, it can adsorb gold under both benign conditions and adverse circumstances.

We used TasA, the major protein of the biofilm matrix component in B. subtilis, and CotC, the B.subtilis spore component, as fusion partner to display GolB.

When nutrition is sufficient, we can use plant polysaccharides to induce the formation of biofilm, on which protein TasA can be simultaneously expressed with GolB. Besides, when conditions get adverse for the growth of cells, B. subtilis produce spores to survive. If we express the GolB along with the coat protein CotC, spores will be capable of gold adsorption. Therefore, B. subtilis can adsorb gold under both benign conditions and adverse circumstances, which tremendously improve the efficiency of gold adsorption.

To realize this goal, we have designed four pathways shown in Figure 2, which are used in our project. In order to improve the efficiency of the expression of the two former pathways, we utilized a constitutive promoter Pveg, a biobrick part in the biological parts of iGEM used by us to replace the promoter Ptas and Pcot, which is involved in the two latter payways. 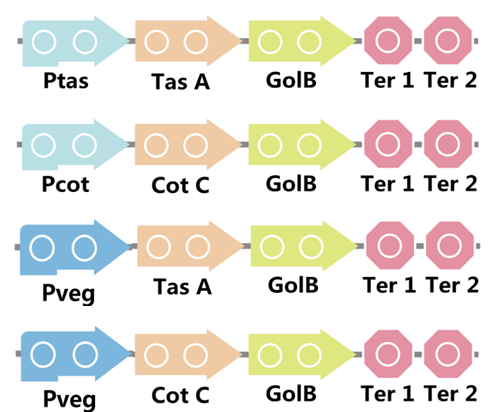 We will construct our plasmid in E.coli first and affirm the feasibility of the pathways, after which we will transform the plasmid into B.subtilis. After linearization of the plasmid, we can integrate the target genes into the chromosomes of B.subtilis utilizing homologous recombination. The process and shuttle plasmid can be shown as follows.

Figure 3. The process to integrate the target genes into the chromosomes of B.subtilis utilizing homologous recombination. 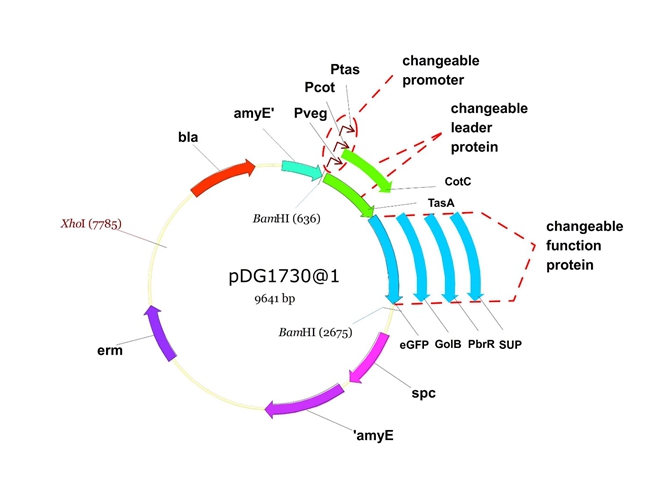 Figure 4. The shuttle plasmid designed by our project including the preceding pathways.

To further improve the selectivity of gold adsorption, we had a plan to design a pathway as follows. With the gol specific promoter pGolB, the heavy metal-binding biofilm protein/coat protein can be expressed only when there is specific gold in the solution. In addition, we could do a pre-test to demonstrate the feasibility of the pathway by replacing GolB with the reporter protein GFP.

Figure 5. The designed pathway to improve the selectivity of gold adsorption. 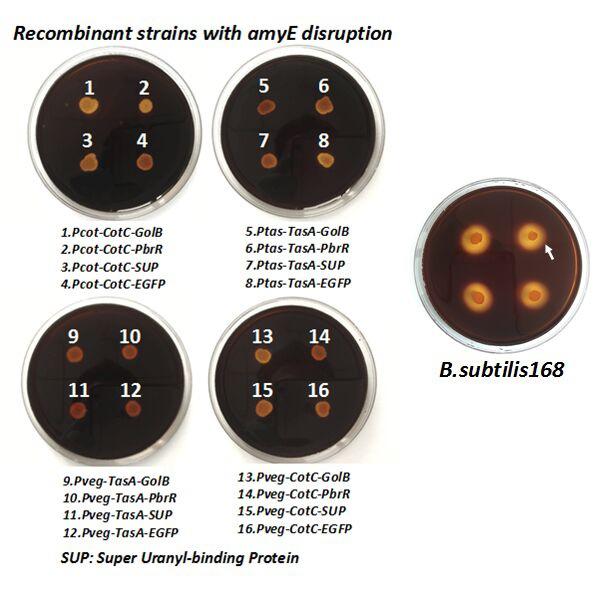 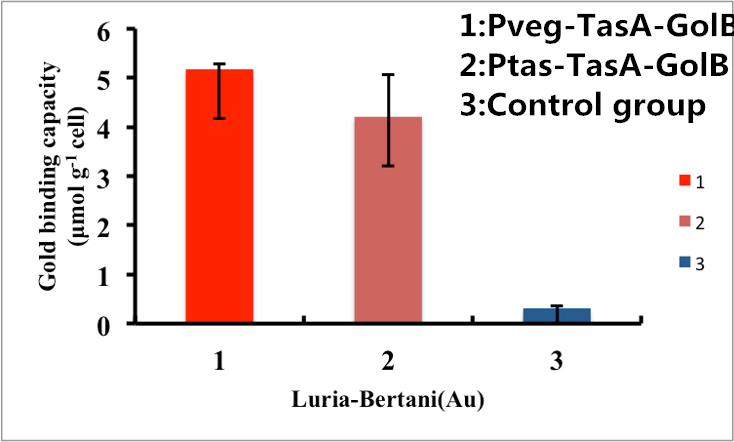 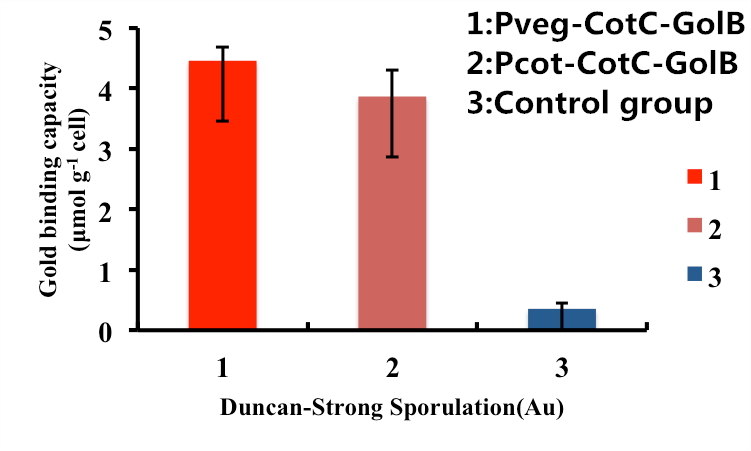 In conclusion, the engineered B. subtilis as well as the endospores worked well in heavy metal adsorption. Besides, it is proved by us that Pveg is a more efficient promoter than Ptas and Pcot, so maybe we can utilize promoter Pveg when engineering B. sublitis.