GFP, based on E0040, with overall mutation minimized

To generate this GFP variant with enhanced mutation resistance, we made synonymous codon substitutions to the commonly used E0040 GFP sequence in the registry. These sequence modifications were preformed by a computer algorithm developed by the Vanderbilt 2015 team. The algorithm weighted the relative frequency of multiple mutation types and their associated hotspots, and altered the DNA sequence to minimize the overall mutability score of the sequence.

Our optimization algorithm was able to reduce the mutability score by 10% relative to the original E0040 sequence. Please see the Vanderbilt iGEM 2015 wiki for more information about the various mutation hotspot sites that were eliminated by this procedure.

We first check for the successful integration of our synthesized sequence for K1673410 first by restriction digest. A band was produced at 2.8 kb, as expected for the sequence in pSB1C3. We then sequenced the gene from the forward and reverse ends using VF2 and VR primers. This sequencing conclusively determined that our optimized sequence was present and in the correct orientation.

During the algorithmic optimization process, codon-usage frequencies were factored in to which nucleotide substitutions to make, When placed under the R0010 IPTG-inducble promoter, our cells visibly fluoresced green. We have not yet constructed a control GFP sequence with identical promoter/RBS/terminator conditions, and thus do not have data comparing the fluorescence of K1673410 with E0040. However, as shown, the GFP signal is fairly intense and suitable for effectively any application that the original E0040 could be used for. 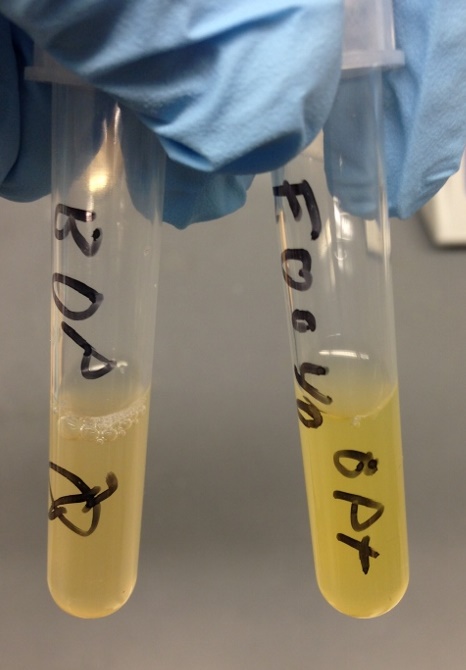