A variation of the part BBa_E0040 that has been made compatible for Golden Gate by removal of internal BsaI and BpiI recognition sequences.

This part, originally isolated from Aequorea victoria, fluoresces under UV light when the gene is expressed. GFP absorbs light at a wavelength of 395nm and emits light at 509nm- producing green florescence. As the florescence is easily detectable under UV light, expression is easily tracked making the protein very useful as a reporter.

The part was used by iGEM14_NRP-UEA-Norwich as a reporter to test several different promoters with the aim of determining which would be the most useful in further stages of the project. Golden Gate cloning was used to hook GFP up to the promoters 35s (BBa_K1467101), BS3 (BBa_K1467102), PDF1.2 (BBa_K1467103) and PR1 to produce transcriptional units that expressed GFP in Nicotiana Benthamiana following infiltration of agrobacterium carrying the relevant plasmid. 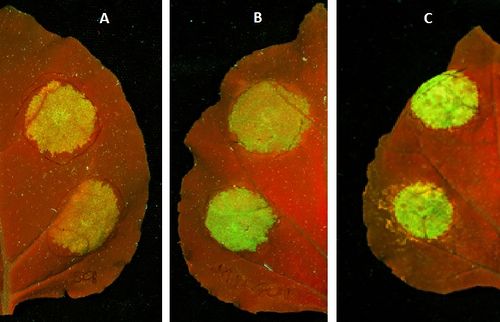 Figure 1: Nicotiana Benthamiana leaves under UV light following infiltration of agrobacterium carrying the constructs (A) 35s_GFP_ocs, (B) BS3_GFP_ocs, (C) PDF1.2_GFP_ocs. In each case GFP protein has be transcribed and is shown as florescence under UV light following activation of the promoter (35s is constitutive, BS3 has been induced by the TALE AvrBS3 and PDF1.2 has been induced by Methyl Jasmonate).

This year at NRP-UEA, we aimed to develop a prebiotic, which involved the acylation/butyrlation of starch. We aimed to achieve this in plants by using various acyltransferases. We used GFP to tag our constructs in order to confirm the localisation of our parts to the chloroplast, where starch is produced.