PDF 1.2 is a plant specific promoter which is induced by the compound Methyl Jasmonate - produced naturally by plants in response to various biotic and abiotic stresses such as wounding and pathogen infection. For this reason, the PDF1.2 promoter is useful for testing a system in which protein expression is initiated in response to pathogen infection (represented by the presence of methyl jasmonate).

This part is compatible with the GoldenGate MoClo Assembly Standard as it is free from internal BsaI and BpiI recognition sequences.

This promoter was used by iGEM14_NRP-UEA-Norwich to induce expression of several reporter genes. As Methyl Jasmonate is a compound that is known to be produced by plants as a response to pathogen infection, the promoter was used to test our proof on concept system in which various reporters (GFP, Bax, Nbhb1, AmilCP and AmilGFP) were transcribed by activation of PDF1.2 in the presence of methyl jasmonate with less expression being seen when methyl jasmonate was not present, showing that the promoter functions as expected. Evidence of this using the GFP reporter is shown below. 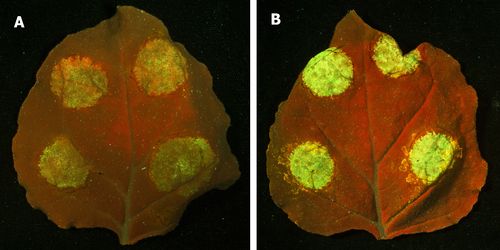 Figure 1: Nicotiana benthamiana leaves under UV light following infiltration (red circles) with Agrobacterium tumefaciens carrying plasmids encoding PDF1.2_GFP_ocs. Leaf (B) has been treated with Methyl Jasmonate whilst the control, leaf (A), was untreated.