35S is a plant specific promoter obtained from the Cauliflower Mosaic Virus. The part is intended for use as a constitutive promoter for gene expression experiments in plants. This part is compatible with GoldenGate MoClo Assembly Standard as it is free from internal BsaI and BpiI recognition sequences.

iGEM14_NRP-UEA-Norwich have used this part in constructs to constitutively express proteins of interest, often providing a control to test the expression of each of our reporters. This allowed us to compare expression levels in contrast to when using promoters induced by external stimuli (BS3, PDF1.2, PR1), allowing us to select the most effective inducible promoters. Examples of the way in which the 35s promoter was used in The Green Canary project are shown below. 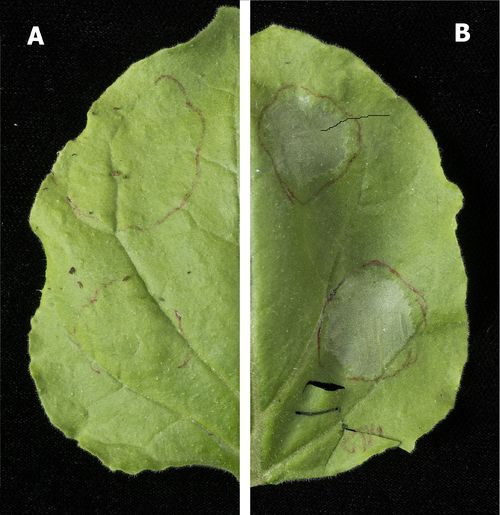 Figure 1: The result of an infiltration of Agrobacterium tumefaciens into Nicotiana benthamiana, showing plant cell apoptosis caused by expression of Bax. This Bax expression also gives evidence for the function of the 35S promoter which is constitutive and therefore causes expression of the protein without external stimuli.

The part is similar to parts BBa_K509000 and BBa_K414002 submitted by previous iGEM teams but has been domesticated to fit the GoldenGate MoClo Assembly Standard. The part can be used by future iGEM teams using the GoldenGate standard, allowing cloning in a one-pot, one-step, digestion-ligation reaction as detailed by the NRP-UEA iGEM 2014 team protocols.

At NRP-UEA, we aimed to produce a prebiotic to prevent colon cancer. To do this, we attempted to acylate/butrylate starch in plants. Methods to chemically acylate starch purified from plants already exist, but as they use strong chemicals and require heating they are not environmentally friendly. Using various acyltransferases, we hope to acylate starch in plants. We’ll be using a model plant, Nicotinia benthamiana, for initial tests because we can get results within a few days. We used Golden Gate Cloning and the Plant Standard Syntax described in RFC106 and Patron et al (2015) to make our constructs.

All of our constructs contained the 35s Constitutive Promoter. This was done to drive the constitutive expression of our parts in the plants. We also added a chloroplast transit peptide, acyl transferase, and a 35s terminator to our constructs (BBa_K1618033‐036). In a second set of parts, we added a fluorescent tag, to confirm the function of our chloroplast transit peptide (BBa_K1618029‐032). 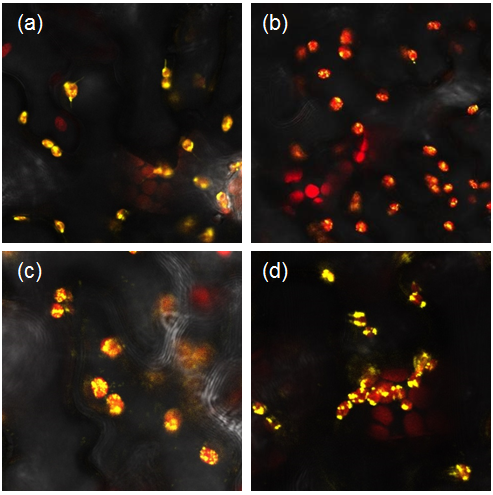 The above results not only indicate that our chloroplast transit peptide works, but also suggest that the 35s promoter that we used is GoldenGate compatible and functioning.