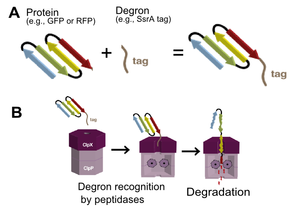 Figure 1 SsrA degron mediated protein degradation. (A) Any version of SsrA tags can be attached to any protein of interest (e.g. RFP or GFP). (B) The tag is recognized by ClpX unfoldase forming a complex with ClpP protease and the tagged protein gets degraded.

ClpA and ClpX then form a proteosome-like complex with ClpP protease and the protein is degraded.[1] The final three residues of the tag determines the strength of interaction with ClpX and thus the final protein degradation rate.[2] The NYADAS tag encodes peptide sequence AANDENYNYDAS is reported to have low affinity to ClpX thus its mediated degradation very much depends on the concentration of SspB (ClpX mediator).[1] The two additional residues ‘NY’ extends tag between SspB and ClpX binding sites, thus preventing clash when both proteins are bound to the tag.[3] However, be aware that exact protein degradation rate is influenced by multiple other factors: ClpXP and ClpAP protease concentrations, protein stability, Km of binding to the protease, temperature [4].

This part was GFP(mut3b) followed by a variation of the WT SsrA tag sequence, which codes for the amino acid sequence AANDENYNYADAS. When the degradation tag fused to the C-terminal of proteins, it will make the protein susceptible to fast degradation through SspB-mediated binding to the ClpX protease as well as ClpA. DAS variants of SsrA tags require SspB for efficient degradation.

Note that tagged protein degradation rates are dependent on concentration of proteases (ClpX, ClpA) and binding mediators (SspB). Degradation rates are also heavily dependent on protein stability and depend on Km of binding to the protease, which is highly variable with each substrate. Be aware of ClpX, ClpA, and SspB knockouts when using SsrA tags; some expression strains have these mutations.

We constructed aTc inducible measurement pathway for this part to characterize. Compared with aTc inducible GFP without SsrA degradation tag, we found that the degradation tag has the ability to degrade the protein quickly. After construction, we transformed these two plasmids into E.coli DH5αZ1 respectively. We shake the recombinant strain in the liquid LB medium after adding the same concentration aTc. When culturing for 6h, we can observe a noticeable difference. It indicates that SsrA tag can help GFP degrade quickly. After centrifugation, the strain expressing GFP with SsrA tag shows almost no fluorescence. 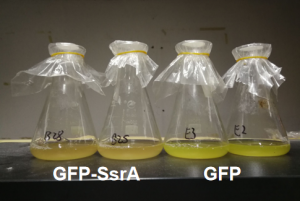 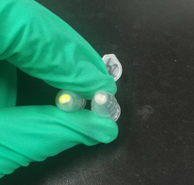 The above qualitative experiments are not enough to verify the effect of SsrA, so we tested the fluorescence intensity by microplate reader to measure the expression level of GFP with SsrA induced by Ptet. As we predicted, SsrA degradation tag can help us degrade the protein quickly. 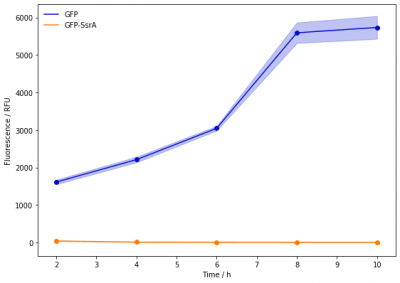 Figure3: The result by microplate reader shows the function of SsrA degradation tag.

Extend to our project

Furthermore, given that the accumulation of Stabilizer can lead to the increased metabolic pressure on cells, affecting cell function and the expression of target genes, we came up with a idea to help reduce intacellular space utilization. We constructed a Tunercontaining a SsrA degradation tag which can degrade Stabilizer. The results can demonstrate that this tuner can improve response curve of riboswitch successfully!