Untagged GFP behind a constitutive promoter.

In our project to combat Leishmaniasis using a genetically modified bacterium we planned to use bacterial promoter pTET as a upstream of our coding region but for it to act effectively we need to quantify that its promoter activity is comparable in both bacterial and mammalian culture medium.

BBa_I13522 was used as a test circuit to compare the activity of pTET bacterial promoter in bacterial medium Luria Broth and mammalian cell culture medium DMEM. The bacterial promoter pTET constitutively expresses comparable amount the downstream coding region (GFP in this case) irrespective of medium in which it is grown.

We characterized this part using fluorescence at different concentrations of doxycycline (DOX) in order to determine the level of DOX we would need to use to induce genes in the system we were testing. The plasmid was transformed into two cell types: NEB 10-beta and a cell strain containing tetR. Cell cultures were grown up overnight in 5 mL of LB with chloramphenicol at 37 C. The folloTwing day, 990 uL of LB, 10 uL of cell culture, and 1 uL of chloramphenicol were added to 1.5 mL Eppendorf tubes. The tubes were incubated for 4 hours at 37 C. After 4 hours, DOX of varying concentrations was added to the tubes. Five different conditions were tested, with each condition tested with 4 replicates. The tubes were then incubated at 37 C for 16 hours. 200 uL aliquots were then taken from each tube and spun down for 3 minutes. The cells were resuspended in 200 uL of PBS buffer. 100 uL of resuspended cells were plated on a clear 96 well plate and fluorescence and OD600 were measured. The fluorescence settings were excitation set 485 nm, emission cutoff at 495 nm, and emission at 525 nm. 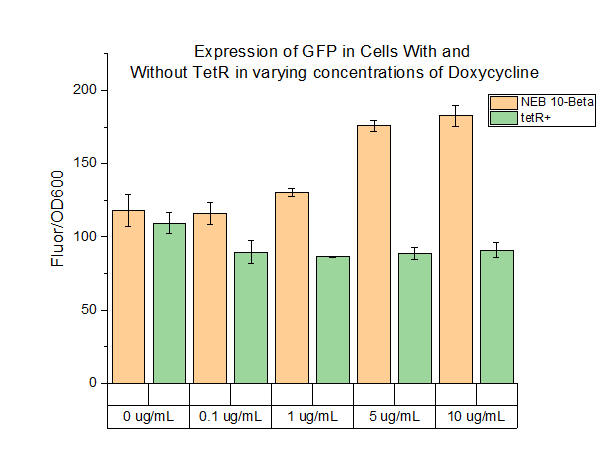 The above figure shows the measured fluorescence of GFP in NEB 10-Beta normalized by OD600. The addition of DOX at the indicated levels had a slight toxic effect on the cell, resulting a decrease in OD600. This accounts for the increase in fluorescence in NEB 10-Beta cells as concentration increased. The same effect was not seen in the tetR+ cell line, however, as fluorescence levels remained about constant at all concentrations of added DOX.