Not Released
Sample In stock
Experience: None
1 Uses
2 Twins
Get This Part

This is the universal acceptor plasmid for creating new PhytoBricks parts. It contains the lacZ-alpha fragment in the cloning site for blue-white screening through the use of IPTG and X-Gal on the agar plates.

This sequence is contained within the BioBricks vector pSB1C3. 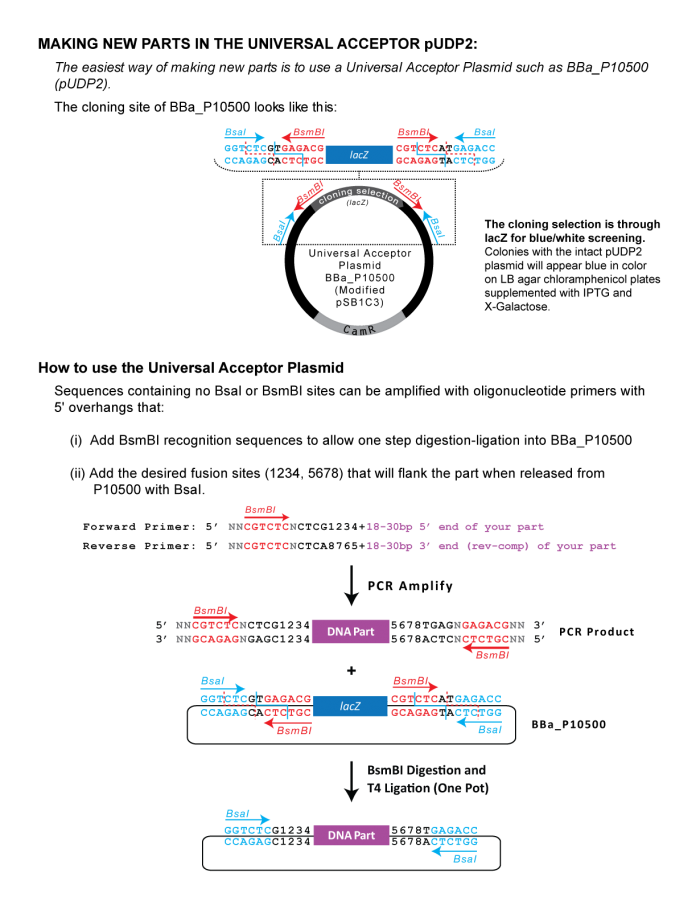 Here, we present the improvement of an iGEM-part for easier and cheaper selection which suits our needs.

iGEM provides the universal acceptor plasmid BBa_P10500 for creating new PhytoBricks. This plasmid contained the lacZ-α part in the cloning sites for blue-white screening. As we wanted to establish Vibrio natriegens as a chassis for cloning, we investigated if the wild type strain is compatible with blue-white screening. Unfortunately, cloning using BBa_P10500 in V. natriegens shows no difference between colonies containing the lacZ-α dropout and those without. To overcome this limitation and to enable fast and reliable cloning with V. natriegens, we decided to establish a new visualization method. Our improved part, namely BBa_K2560002, is a derivative of the iGEM BBa_P10500 containing a sfGFP dropout as fluorescent selection marker. 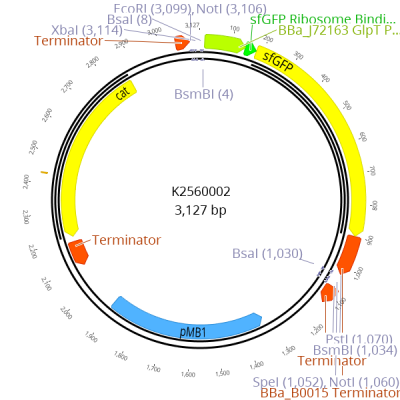 In the pictures 2, you can see the wild type V. natriegens in comparison with the iGEM BBa_P10500 forming white colonies as well as bright green colonies containing the improved part BBa_K2560002. No differences between the wild type and the BBa_P10500 containing colonies are noticable. On the contrary, our new BBa_K2560002 part leads to a strong visual distinction to colonies which do not possess the sfGFP. In this way, we created a part for universal LVL0 cloning with a improved selection without the need of additional supplements like Xgal or IPTG.

Our part not only suits for V. natriegens but is convenient for the frequently used cloning host E. coli. As it can be seen in the picture 3, E. coli containing the sfGFP possess a considerable strong green colour even without the use of UV light and is just or even more distinguishable from the wild type as the lacZ containing blue colonies. By using our improved part BBa_K2560002 instead of the iGEM part BBa_P10500 work and money for the addition of the required supplements can be saved and the risk of not functional plates for selection is decreased. In our experiments, we were using 40 μg per Liter Xgal and 0,5 mM IPTG. Calculating with current prices, 100 plates supplemented with Xgal and IPTG costs about 80 dollar.

By using our improved part for cloning, the detection of successfully ligated clones from non is feasible for strains which are not compatible with blue-white screening and therefor becomes more universal, faster and cheaper than before.