FixK2 promoter is the wild-type promoter to which phospho-FixJ binds. FixJ in turn can be regulated by YF1, the blue light-sensing protein. This promoter shows very little leaky activity in the absence of FixJ.

We wanted to test the reliability of this promoter -- is there leaky expression? And if so, how much is there?

Leaky expression is when a promoter initiates transcription of a downstream region of DNA when it’s not supposed to. In this case, FixK2 is only supposed to initiate transcription when FixJ-p binds to it. So to test for leaky expression, the genetic circuit shouldn’t contain FixJ. Thus, any expression of the chosen marker is a result of leaky expression. In our experiments, we used GFP as an indicator of FixK2’s activity. We designed a positive control that constitutively expresses GFP and a negative control that doesn’t contain GFP. Below are our genetic circuits:

After making 2mL overnight cultures of E. coli Top10 containing these genetic constructs, we made a 1:100 backdilution into M9 media. We then exposed them to their separate light conditions for 3 or 5 hours. From there, we extracted 150uL from each sample and put them into a 96-well microplate and analyzed its fluorescence via flow cytometry (BD Accuri C6). FL1-A values were determined by selecting FSC and SSC between the 25th and 75th percentiles. 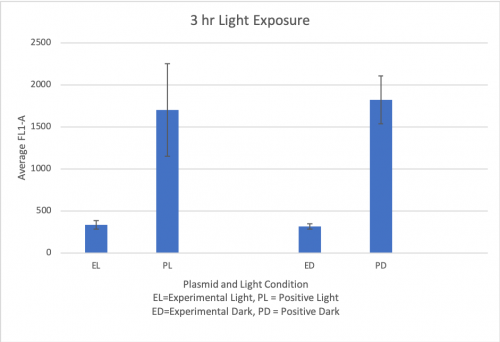 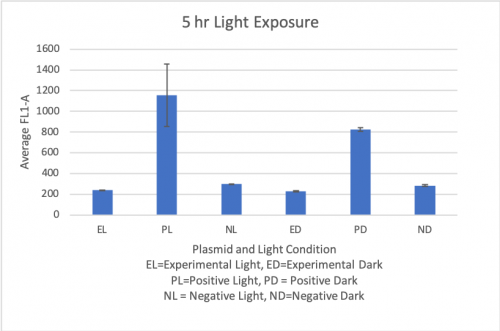 Our results show that the FixK2 promoter has very little to no leaky expression. In both light-exposure and no-light exposure tests, our experimental plasmid had fluorescence levels comparable to the negative control. Our positive control, as expected, produced significantly higher fluorescence.