Released HQ 2013
Sample In stock
Experience: Works
Not Used
1 Twin
Get This Part

Pichia pastoris initially gained attention as an expression system after recognition of its methylotrophic capabilities and the high levels of alcohol oxidase (AOX) present when induced by methanol. By isolating the promoter (PAOX1)responsible for AOX1 production, this system can be utilized to obtain high yields of heterologous protein. The promoter provides not only high expression but very tight regulation as well. Vectors providing protein expression under the control of PAOX1 are the primary system used for P. pastoris.

Methanol Induction of the AOX1 Promoter

The promoter of the AOX1 gene (alcohol oxidase 1, gene symbol: PAS_chr4_0821) (PAOX1), homogeneous to Pichia pastoris GS115, is a very strong promoter that is tightly regulated by the carbon source present in the media: it is strongly inhibited by glucose and glycerol, but significantly induced when methanol is present as the only carbon source. This characteristic allows P. pastoris to be a very preferable strain for regulated bioreactor production. It can also be used as an efficient expression system for heterologous proteins.

In Wang et al., 2016, the regulation of the PAOX1 is characterized by GFP fluorescence and is compared to that of the GAP promoter (PGAP), a strong constitutive promoter in P. pastoris. Specifically, GFP is expressed by each of the promoters and these constructed strains of P. pastoris are incubated for 12 hours in YNB medium (0.67% yeast nitrogenous base without amino acids) and 50 mg/mL histidine supplemented with 1% glucose (YND), 1% glycerol (YNG), or 0.5% methanol(YNM). The GFP fluorescence intensity is measured by an enzyme-labeled instrument (Synergy 2 by BioTek Instruments) and normalized to unit cell concentrations (in terms of arbitrary units as represented by OD600 measured by the enzyme-labeled instrument). The geometric mean of the normalized data is then calculated and analyzed.

As illustrated by Figure 1, the activity of the pGAP remains largely unchanged regardless of the carbon source in the media. The activity of pAOX1, however, is minimal in glycerol and glucose media, yet very significant in methanol media. 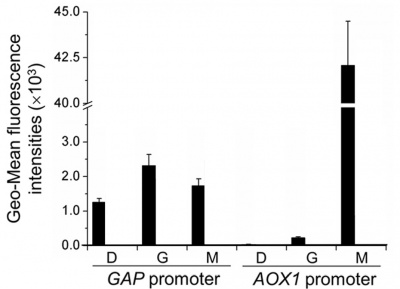 Figure 1. evaluation of the activity of PAOX1 via a reporter gene (GFP) expression assay in the wild type P.pastoris strain in glucose (D), glycerol (G) and methanol (M) media.

In wild type P. pastoris, alcohol oxidase 1 allows the methylotrophic yeast to metabolize methanol. The regulation of the PAOX1 indicates high specificity in the expression of alcohol oxidase 1 and therefore makes P. pastoris a very attractive candidate for regulated fermentation on an industrial scale, especially if the production of a certain chemical needs to be precisely controlled: the protein expressed by PAOX1 can be relatively simply yet precisely regulated by shifting the carbon source present in the media.

in trans Regulation of PAOX1

In Wang et al,.2016, it is also experimentally demonstrated how PAOX1 is in trans regulated upon methanol induction. Various knock-out and knock-in strains were produced and the mRNA transcription levels of the proposed transcription factors were evaluated to illustrate the regulation.

Based on the interpretation in this paper, upon methanol induction, transcription factors Mxr1 and Prm1 are activated. The former derepresses PAOX1 while the latter activates PAOX1. The activation of PAOX1 is further amplified via the self-activation of Prm1 (Prm1 activates its own promoter, PPRM1) and the activation of Mit1 by Prm1. Mit1 is a third transcription factor that activates PAOX1. Given that PAOX1 expresses alcohol oxidase 1 in P. pastoris, the key protein that allows it to metabolize methanol, this strong activation allows the methylotrophic yeast to rapidly respond to the change of carbon source from glucose, etc. to methanol. After PAOX1 is strongly activated, over activation is prevented via the suppression of PPRM1 by Mit1. This regulatory pathway is illustrated in Figure 2.

In our experiment, we integrated PAOX1-GFP (yEGFP3 expressed by the PAOX1, BBa_K3239007) into wild type Pichia pastoris GS115 to reflect the activity of PAOX1wild type P. pastoris GS115.

This is valuable given that the expression of AOX1 is critical to the methanol metabolizing ability of P. pastoris, and in certain uses functional proteins such as the insulin precursor expressed by PAOX1 (PAOX1-IP) is integrated into P. pastoris much in the same way as how we integrated PAOX1-GFP into the yeast.

Figure 3. Illustration of the pAOX1-GFP construct 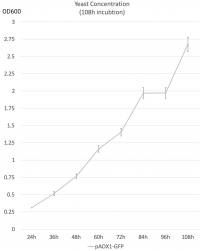 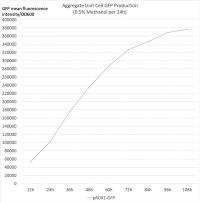 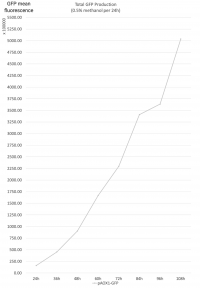 For detailed use of PAOX1 in our experiments, please check our wiki!