Complex of 11S globulin from amaranth and hypotensive peptide multimer.

11S globulin from amaranth to engineer a new protein by adding a four valine- tyrosine antihypertensive peptide at its C-terminal end to improve its functionality. A11S globulin seed storage protein (A11Sg) is selected for fusion expression with active polypeptide.

Construction of the Recombinant Plasmid pET-28a(+)-A11Sg-AHPM

Because the GST protein is non-foodborne, A11S globulin seed storage protein (A11Sg) is selected for fusion expression with AHPM, and studies have shown that the hydrolysate of the protein also has hypotensive activity. The A11Sg-AHPM gene was cloned into the pET-28a (+) expression vector, and the recombinant expression was named pET-28a (+)-A11sg-AHPM. As shown in Fig.1, Lane 1 and lane 2 both have fragments of 1735 bp, which is the same as A11Sg-AHPM. The result show that the recombinant expression vector named pET-28a(+) was constructed successfully. 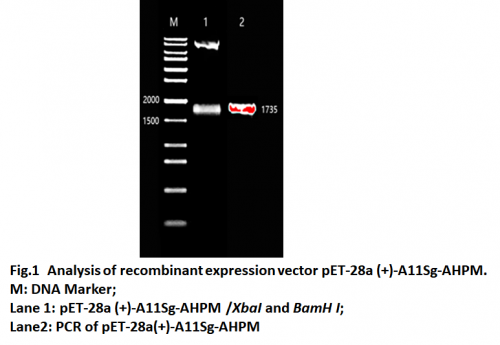 The recombinant pET-28a (+)-A11Sg-AHPM transferred to E.coli BL21(DE3) and the recombinant E.coli BL21(DE3) were selected on LB plates containing 50μg/mL kanamycin. Then the cells were induced by IPTG and the results of protein electrophoresis were shown in Fig.2 The SDS-PAGE results showed E. coli BL21 transferred with pET-28a(+)-A11Sg-AHPM produced a 66kDa protein (lane 3) which was a little bigger than expect 64kDa fusion protein. Western blot results showed that the constructed A11Sg-AHPM protein could be expressed in E. coli. 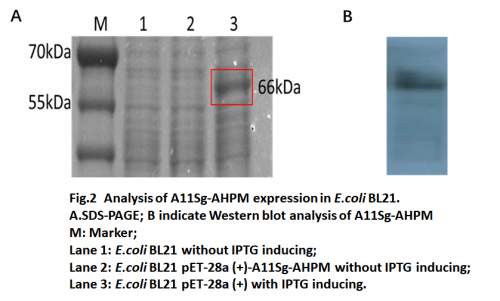 In vitro activity of A11Sg-AHPM

The fusion protein A11Sg-AHPM was purified by His affinity chromatography. The mixture of A11Sg and AHP peptides was obtained by trypsin hydrolysis. The in vitro activity of the mixture is shown in the Fig.3. The IC50 that inhibits the activity of ACE is 1.28mg/mL 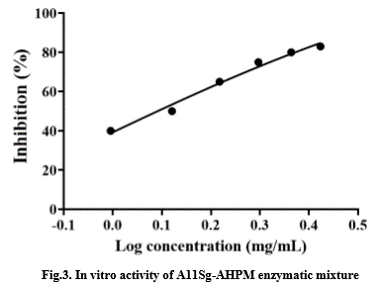 The verified A11Sg-AHPM was inserted into the LAB expression vector pMG36e. In order to allow the fusion protein to be secreted into the intestine, we also linked to the secretory signal peptide SPusp45. Furthermore, in order to using pH control promoter to regulate the expression of A11Sg -AHPM, we also inserted the O1/O2 operator which will be binded by LacR protein. So, the fragment O1/O2-Spusp45-A11Sg-AHPM (OOUAA) was synthesized and inserted in the pMG36e vector. The recombinant vector named pMG36e-A11Sg-AHPM and was confirmed by restriction analysis and PCR(Fig.4). The results showed the fragment with size 2124bp could be obtained by restricted (lane1) and amplified (lane2). The results suggested that the recombinant expression vector was constructed. 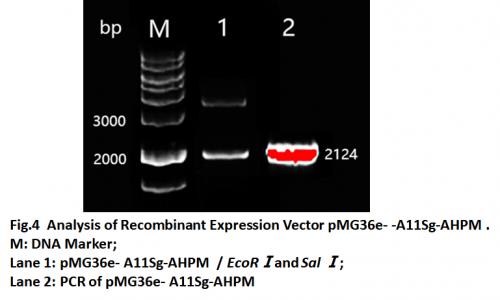 The pMG36e-A11Sg-AHPM recombinant vector transferred to Lactococcus lactis MG1363（LAB MG1363） by Electroporation and cultured in GM17 medium. The fermentation broth was collected and detected by SDS-PAGE. The results of protein electrophoresis in Fig.5 indicated that the fusion protein can also be expressed in Lactococcus lactis MG1363 and that the fusion protein exists in the fermentation broth, which means that SPusp45 successfully secreted the protein to the outside of the cell. 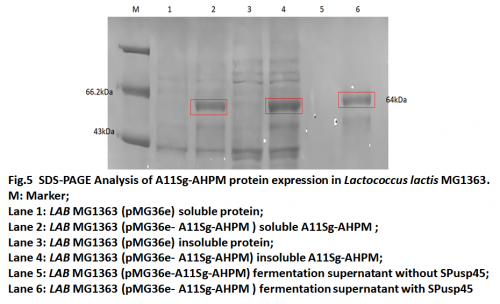 The collected fermentation supernatant of lactic acid bacteria was hydrolyzed with trypsin and α-chymotrypsin to determine its in vitro activity. Because, we want to use lactic acid bacteria with antihypertensive function. The A11Sg-AHPM protein could not be purified. In a word, after fermented, the supernatant was hydrolyzed and analyzed activity directly. The LAB MG1363 transferred with pMG36e was used as the control group. The results were showed in Fig.6. The IC50 of supernatant of LAB MG1363 transferred with pMG36e-A11Sg-AHPM was 4.8 mg/ml. Compare the control supernatant, the IC50 result indicated that the fermentation supernatant of LAB MG1363 transferred with pMG36e- A11Sg-AHPM has much higher inhibitor activity than control group. It shows that the fusion protein with antihypertensive peptide can be secreted outside the cell, and has a high blood pressure lowering activity after enzymatic hydrolysis. 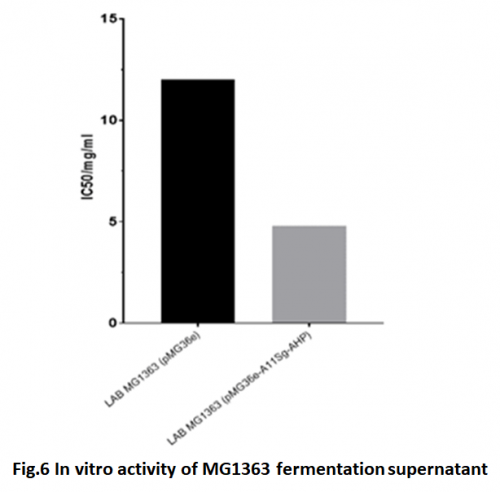