PsbT is a small monomer peptide that is approximately 3.5 kDa according to literature. PsbT is a subunit that form an integral part in the Photosystem II complex. The main function that it conducts is the repair of the Photosystem II reaction centre. Knockdown of PsbT is shown to cause reduction in PSII activity as well as increased photobleaching.

The psbT subunit of the Photosystem II in Synechocystis sp. PCC 6803 is a single membrane-spanning a-Helix of ~3.5 kDa with C-Terminus located on the stromal side of the Thylakoid Membrane. Structural studies of psbT Studies have shown that removal of the psbT subunit reduces the rate of electron transfer between the QA and QB and increased sensitivity to photo-damage. It is an integral part of the Cyanobacterial photosystem II complex and it plays an important role in the electron transfer.

The composite part includes a Lac Promotor, RBS, and terminator to facilitate the direct use of plasmid in expression vectors. The composition allows for the ability to directly use this subunit in further expression and characterization studies. the plasmid with insert and the standard Biobrick backbone is shown to be able to grow and replicate with a high copy number within E coli.

The plasmid was transformed into Dh5a F'Iq cells and plated on to selective plates. Growth of the initial transforments was slow but after secondary inoculation growth appeared to be at nominal levels. To confirm the insert, five transformed colonies were picked and underwent a plasmid mini-prep. The plasmids where then double digested using EcoRi and PstI and the digestion then run on an agarose gel.

The image below shows a confirmation that the formation of the part plasmid was successful. Lanes 1-6 contain the digested plasmid from each of the separate colonies. The band at 2070bp correlates to the expected band size for the linear vector. At 480 bp a secondary band is seen which correlates with the expected size of BBa_K2127003. Lane 7 contains the undigested 2525 bp plasmid to act a reference to confirm the migration of the inserts and whither the digestion was successful. 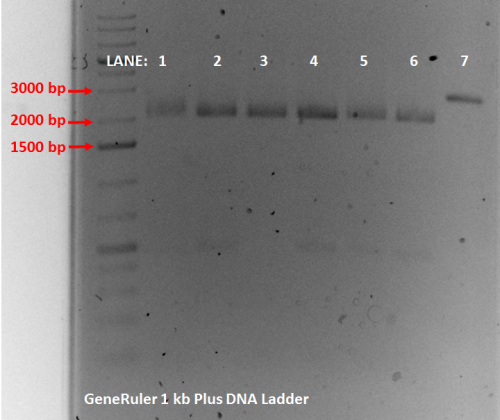 Sanger sequencing was also done using the Biobrick primers VF2 and VR. Proper orientation of the insert was confirmed as well as no mutagenesis was seen. The sequenced insert had 100% alignment with the assembled gene sequence.