Half of the SpCas9 protein fused to DnaE C-intein. The active full-lenght spCas9 can be recovered by using the other half of the protein, N-split Cas9 + DnaE N-intein (BBa_K2017001). Inteins are used to fuse both parts of the protein, as they interact and splice, leaving the active protein.

The protein Cas9 is used in the editing system CRISPR/Cas9. The protein is an endonuclease that cleaves DNA at an specific point, determined by the guide RNA. The guide RNA, which has the structure G-19-NGG, binds the Cas9 and guides it to the DNA strand complementary to the gRNA. Once it recognizes the region to edit, it cuts three nucleotides upstream the recognition sequence, NGG. It is a powerful tool for gene editing.

In this case the Streptococcus pyogenes Cas9 (SpCas9) is the one used in the Valencia UPV iGEM project. The lenght of the Cas9 is 4137bp. We aim to deliver the Cas9 in plants to perform gene editing. As we want to make the editing more efficient, instead of using Agrobacterium tumefaciens as carrier of the Cas9, we use plant viral vectors. However, conventional viral vectors usually are able to carry around 2kb. The SpCas9 is too large. Our solution is to divide the Cas9 in to parts, obtaining a split-Cas9 which can be inserted in viral vector.

To join both parts of the split-Cas9 and reconstitute the functional Cas9 protein, we have used N and C inteins, (BBa_K1362400 and BBa_K1362401, of the 2014 Heidelberg team. These inteins show splicing activity once they join each other. We have added N-intein to the N split-Cas9 (BBa_K2017001) and C-intein to the C split-Cas9, so when they are translated inside the plant cell, the inteins join, splice themselves and let the Cas9 protein complete and fully functional.

Next, we extract genomic DNA from these four plants and carried out a PCR in order to amplify the mutated region. Afterwards, PCR reactions are purified and digested with EcoRI enzyme in order to determine if mutation has occurred. The target of the gRNA (XT1) is a recognition sequence of the restriction enzyme EcoRI. If the Cas9 has not cut, the EcoRI site is conserved, and the digestion will result in two small bands. If the Cas9 has cut, the EcoRI site will be lost and the enzyme will not cut in the digestion. 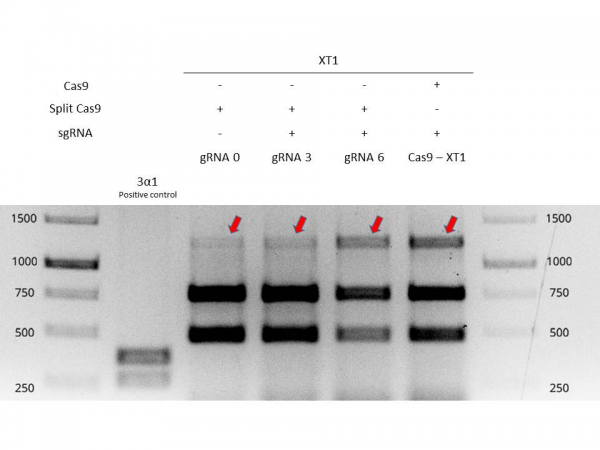 Once the presence of mutations was confirmed, the band resistant to digestion (1st band) was purified, and cloned into a vector. Finally, mutation sequences were analyzed (Fig. 2)