This is the same part as Part:BBa_K1499500, except that it has two more terminators between the luxR gene and the luxPR promoter.

After ligating the BBa_K1499500 construct together and into the BioBrick backbone, we transformed it into the NEB 5-alpha strain of E. coli. The colonies that fluoresced were most likely to have been successfully transformed, and thus these were sent off for sequencing. The sequencing data showed that our construct was correct (see below), so we were able to submit for BioBricking. 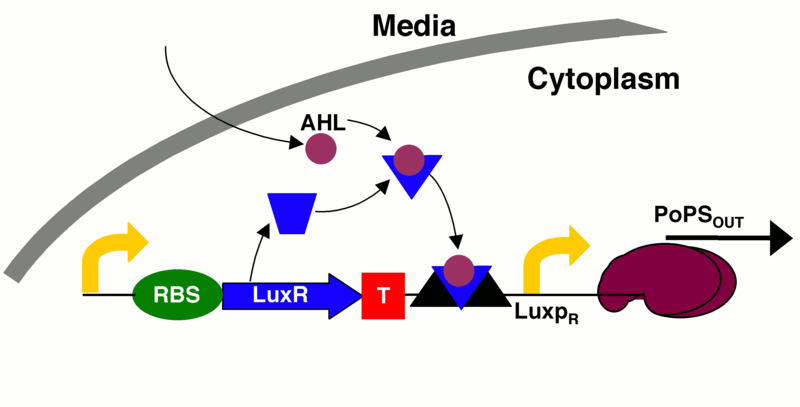 To overcome this issue, in this construct we have added two extra terminators. 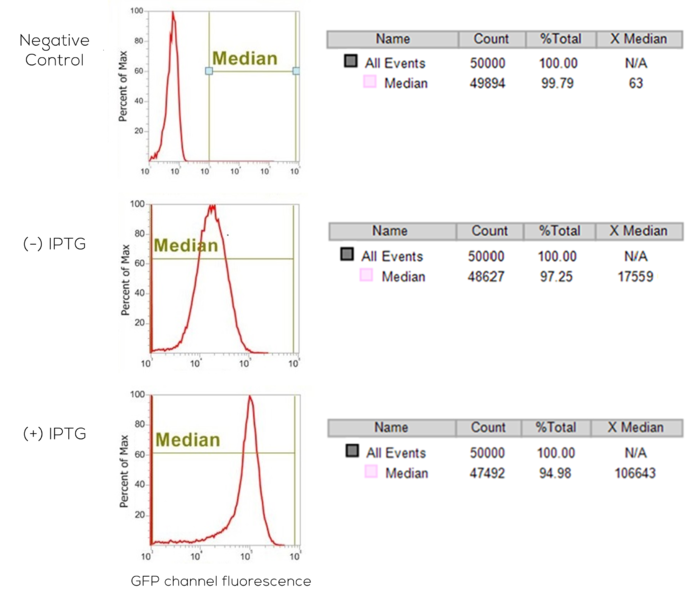 Flow cytometry is a laser-based technology that has a wide-range of uses, including multiparametric cell counting and cell sorting. In this study, we utilized the cell counting ability of the Life Technologies Attune® NxT Acoustic Focusing flow cytometer in order to determine how many of our cells were expressing GFP after being induced with IPTG (a lac analog). The three graphs and tables above represent the flow cytometer data obtained from three samples of lac-deficient E. coli cells. One of the samples was a negative control of LB-cultured E. coli cells (Negative Control), and the other two samples (IPTG-Positive and IPTG-Negative) had the GFP-quorum sensing construct. The IPTG-Positive sample had a ~6X increase in GFP expression over the background IPTG-Negative cells, showing our construct worked correctly.

The “X-Median” seen on the three tables above shows the fluorescence intensity of all of the cells that were counted that were not considered dead (Median). Each sample measured 50,000 cells (Seen under All Events - Count), and then counted all of the cells that were alive (Median - Count), where each sample had between 47,000 and 49,000 live cells. From the data, and as illustrated in the graphs above, we can gather that the fluorescence intensity (X-Median) of the LB only cells was approximately 63 arbitrary fluorescence units (AFU), the IPTG-negative cells was ~17,000 AFU, and the intensity of the IPTG-positive cells was ~107,000 AFU, meaning that the IPTG-positive quorum sensing cells increased fluorescence intensity over 6X the background intensity (IPTG-negative cells). These results indicate that our quorum sensing construct works and greatly increases GFP expression when activated through IPTG-induction. The IPTG-negative cells also expressed some non-negligible degree of GFP, which suggests that the construct could still be improved further. However, the successful proof of concept of our quorum sensing construct is incredibly promising and allows us to proceed forward.