This part generates aeBlue, a blue chromoprotein. However, it contains 3 amber stop codons that code for leucine through the supP tRNA.

The design of the protein coding region of this part was based off Team Uppsala's 2012 chromoproteins kit, specifically BBa_K864401. Please see this parts page for the biology of this protein. The supP tRNA is from Stanford-Brown-Spelman's 2014 Amberless toolkit, or BBa_K1499251. Together, this generator was used to test the orthogonality of the UAG->Leucine coding (Figure 1).

Figure 1. We transformed DH5-alpha and amberless cells with test plasmids, in this case the aeBlue reporter gene with stop codons and the supP tRNA, in order to establish a proof-of-concept for orthogonality using Codon Security.

We have observed that this generator works in amberless E. coli, but not DH5-alpha. Because of the toxicity of the tRNA, the part will be difficult to transform into any strain of bacterium that contains genes with the amber stop codon.

The part was sequence verified in the pSB1C3 backbone before submission to the registry. Two reads, forward and reverse, were obtained using VF2 and VR (Figure 2).

The part has been confirmed to work as expected (Figure 3). The transformation did not work well in DH5-alpha, as seen in the plate on Day 1. The colonies that emerge by day 5 could be due to degradation of the antibiotic and may not represent true transformants. There was no visible expression of the generator in DH5-alpha, but there was expression in amberless cells. This showed that the system could work uniquely in the amberless but indicated it would not work in other cell types. 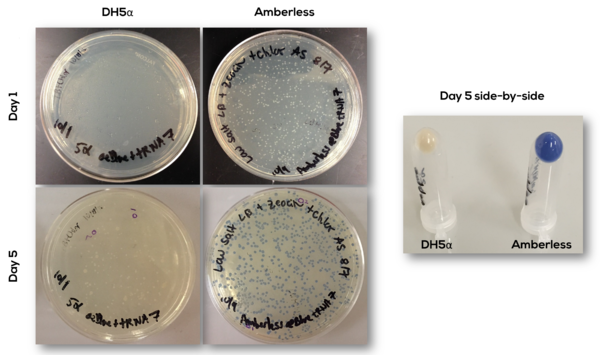 Figure 3. Plates after transforming (at Day 0) DH5-alpha and Amberless cells with aeBlue-3S+tRNA. At Day 1, after overnight incubation at 37C, there are no DH5-alpha colonies, but there are over 200 Amberless colonies. At Day 5, 4 days of room temperature incubation, Amberless colonies express the aeBlue protein and colonies appear in DH5-alpha plate, although possibly because of degradation of Chlor antibiotic. Side-by-side comparison of cell pellets shows that only Amberless strongly express the blue protein.

Cells expressed the protein product only with incubation at temperatures of 30C and lower. The first visible blue product appears at Day 2. Finally, a Western blot with an anti-FLAG antibody confirmed that the complete product was produced in amberless but not DH5-alpha cells (Figure 4). There were no incomplete products, or the incomplete products degraded rapidly. 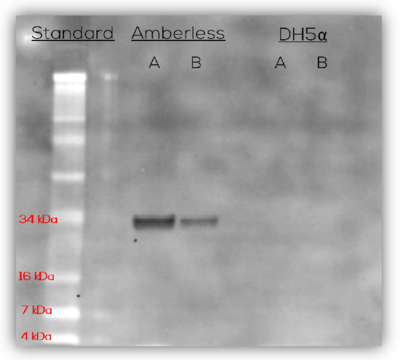 Figure 4. The aeBlue generator is confirmed to work by detection with an anti-FLAG antibody. Lane A has twice the cell lysate concentration of lane B. The band at approximately 30kDa is near the expected molecular weight of the complete aeBlue product (28kDa), meaning that Amberless cells, but not DH5-alpha cells, express the complete protein. Any truncated products would appear at 7, 13, and 20 kDa depending on the stop codon.