MntH with amber stop codon with promoter for expression, no tRNA

This part encodes the manganese transporter, MntH, with one UAG stop codon in place of a leucine and a promoter for expression. MntH is involved with manganese homeostasis, a critical process for dealing with free radicals generated upon exposure to radiation that could potentially cause DNA damage.

Deinococcus radiodurans is a highly radiation-resistant bacterium that can survive after up to 12,000 Gy (absorbed radiation dose, Gray). The unique genes that allow it to better handle radiation exposure may provide ways to make E. coli and other organisms more resistant for applications of synthetic biology in tough environmental conditions, like space. Manganese is a cofactor for many of the radiation stress mechanisms in the cell, and so manganese transporters bring manganese into the cell during radiation stress. These transporters are particularly well-known in D. radiodurans, and expressing these proteins in E. coli has shown promise [1].

This part, as a part of the Amberless toolkit, should be used in Amberless E. coli. As it has one TAG stop, it will not express in other organisms. It will work in conjunction with the expression of the BBa_K1499251 supP tRNA part in amberless cells.

The part was sequence verified in the pSB1C3 backbone before submission to the registry. Two reads, both in the forward direction, were obtained using VF2 and a primer that was designed to bind in the middle of the gene. The site-directed mutagenesis worked at our targeted TGA->TAG stop codon mutation.

Figure 1. Mutations were attempted in separate reactions at three different sites. This shows successful mutagenesis at the first site, with no mismatch (the mutation was written into the reference sequence).

The part has been tested alongside other radiation resistance genes (Figure 2). It does not confer resistance in DH5-alpha cells, as expected. It should only work in the Amberless chassis in conjunction with the BBa_K1499251 supP tRNA part. 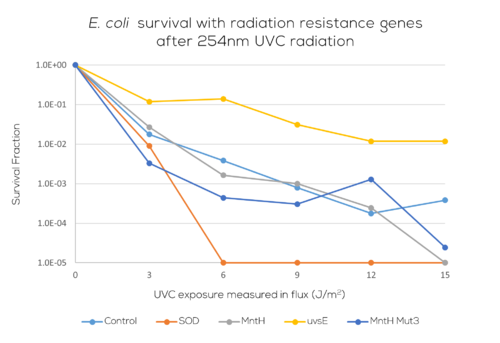