A gfp reporter gene was added downstream so that we can know whether the P-formaldehyde works or not in the presence of formaldehyde by detecting the relative fluorescence intensity.

Figure 1 A GFP reporter is added downstream of the formaldehyde promoter.

We incubated E.coli strain DH5a with the above plasmid （P-formaldehyde plus GFP）and stimulated the experimental group with 1mM formaldehyde when the OD600 value reached approximately one, which means E.coli comes into mid-log phase. And then we collected bacteria at certain time to measure the fluorescence and the absorbance.

From the Figure 2, we can see significant increase in relative fluorescence intensity after formaldehyde stimulation, which shows that our coloration system works well.

The Growth Condition curve in Figure 3 shows that the difference of the fluorescence/absorbance is not generated by the absorbance difference. 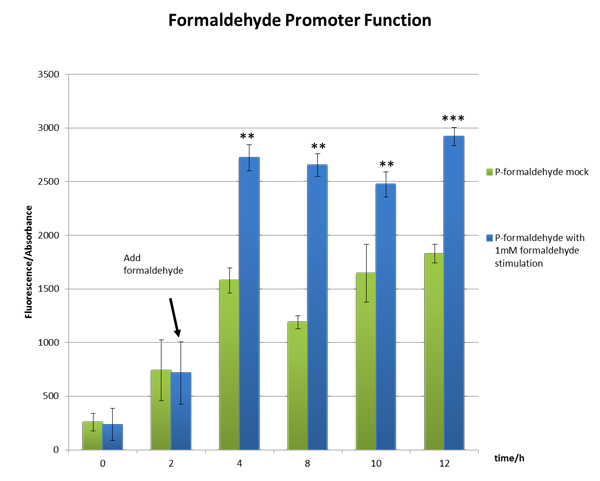 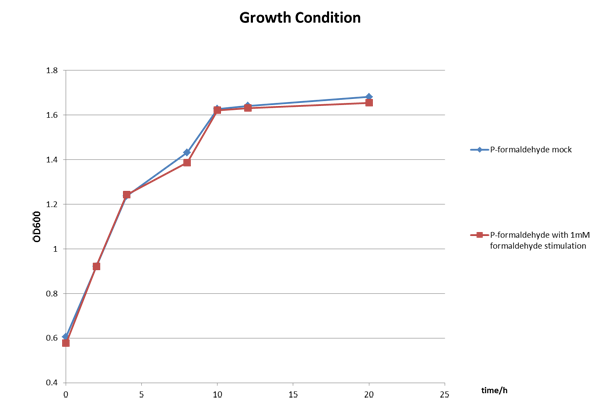 1.The effect of formaldehyde to the cells growth 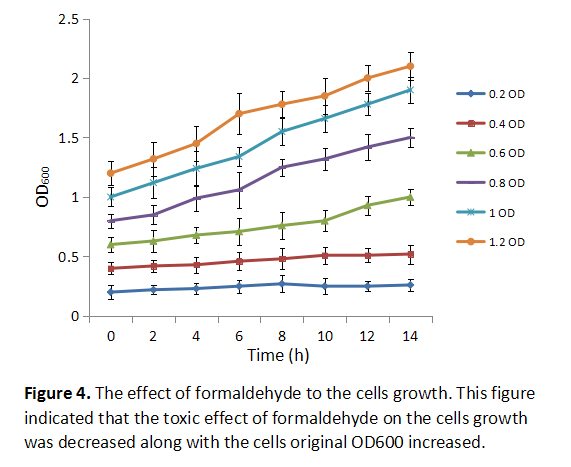 2.The sensitivity of the promoter to formaldehyde 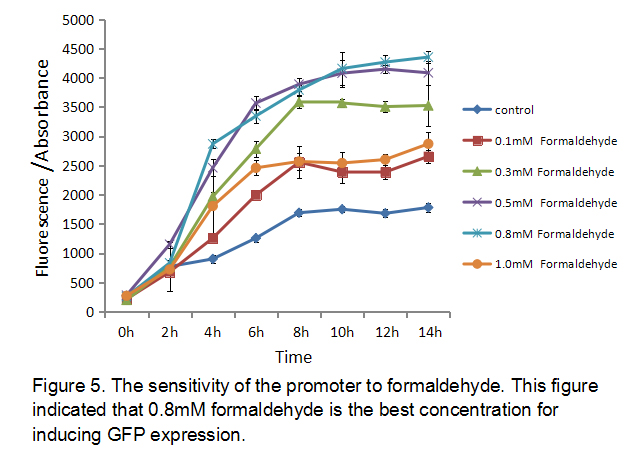 Firstly, we changed the weak promoter to J23100, which is considered as a strong promoter in the Anderson family, and built BBa_K3332042.

Thirdly, we combined those two methods mentioned above and built BBa_K3332044, whose promoter has been changed and the binding sites are added.

Fig 3. Comparison of the strength of J23100 promoter and weak promoter by measuring the fluorescence/OD600

As the figure shown above, J23100 promoter can be used to enhance the strength of formaldehyde promoter as a strong promoter. However, the result of J23100 alternation was not significantly stronger than that compared to the original pHCHO. Therefore, we came out the other two improved version of pHCHO by adding extra binding site as well as both extra binding site and J23100, as the figure shown below.

Fig 4. Fluorescence intensity/OD600 after inducing with 0.8 mM HCHO in 18 hours. Data are collected and analyzed according to iGEM standard data analysis.

From this figure, we can see that the fluorescence/OD600 of the induction group increased, but the improved promoters(modified-1~3) are more obvious than the registry formaldehyde promoter (BBa_K1334002).

Among the three modified promoters, the third modified version appeared to be the strongest one, showed the highest ECFP fluorescence intensity. That is to say the improved Formaldehyde promoters has a higher responsiveness to HCHO, which means that our three kinds of improvements work indeed.