Not Released
Sample In stock
Experience: Works
23 Uses
Get This Part 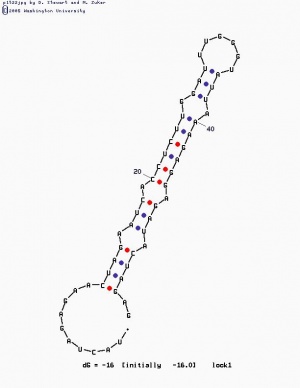 This part was made from the riboregulator lock described by Isaacs et al. in their 2004 publication (see references).

The part sequence contains a ribosome binding site with a short complementary sequence upstream. When this piece is transcribed into mRNA it forms a stem-loop structure which "locks" the ribosome binding site. This folded mRNA structure is known as the 'cis-repressed' part. Part is also available with a constituitively on promoter as BBa_J01060

Sequence secondary structure forms a stem-loop with two dispersed "bulge" sites (formed by intentionally mismatched base pairings) which destabilize the stem-loop enough to allow the corresponding taR12 "key1" to interject itself and open the loop.