A complex pathway for the metabolism of methanol exists within some species of the Pichia genus. Alcohol oxidase (AO) appears to be the first and major enzyme produced in this metabolic pathway (1). Transcribed from its gene (AOX1), AO converts methanol to formaldehyde within the yeast’s peroxisome (1). A metabolic pathway for the utilization of ethanol is also present within the yeast. However, if both ethanol and methanol is present, the yeast will utilize the ethanol before consuming the methanol (2). Consequently, the AOX gene will not be expressed to produce the AO enzyme until the ethanol has been consumed.

Performance of AOX1 in in Pichia pastoris

In our project, we choose AOX1 promoter (BBa_I764001), which is a common inducible promoter used in Pichia pastoris GS115, to control the expression. To make sure the AOX1 promoter works properly, we tested its performance with sfGFP.

We added sfGFP gene behind AOX1 promoter, inserted the whole sequence into pPIC9K backbone and transformed the plasmid into P. pastoris GS115. The recombinant strain was conducted fermentation test BMMY Medium. We measured the OD600 absorbance and fluorescence of the fermentation broth every 24 hours, and the supernatant samples during the fermentation were verified through SDS-PAGE gel electrophoresis.

The OD600 absorbance of the recombinant strain that contains sfGFP is a little lower than the control strain P. pastoris GS115. That may be caused by the additional expression of sfGFP, the results show that expression of heterologous gene would repress cell growth, while the repression is not intensive. 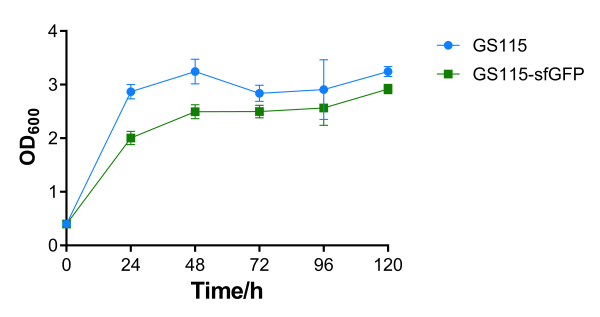 The fluorescence of recombinant strain that contains sfGFP becomes higher for every 24 hours, while that of P. pastoris GS115 remains mostly the same. This shows that AOX1 promoter under the control of methanol has the capability of promoting fluorescent protein expression. 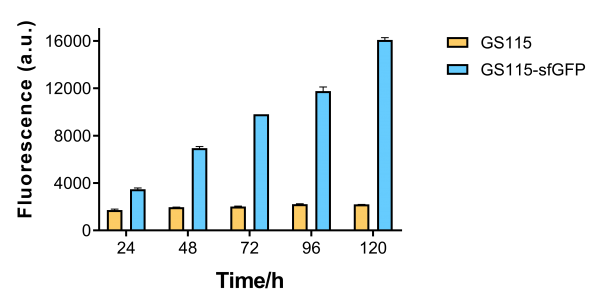 From the results (Figure 3), correct bands of sfGFP were shown as expected. The protein band at 24h can be barely seen; that at 48h is greater; and at 72, 96, 120h are nearly the same, all greater than at 48 h. So the clarity of the bands increases over time, which means the protein expression is getting more intensive every 24 hours. 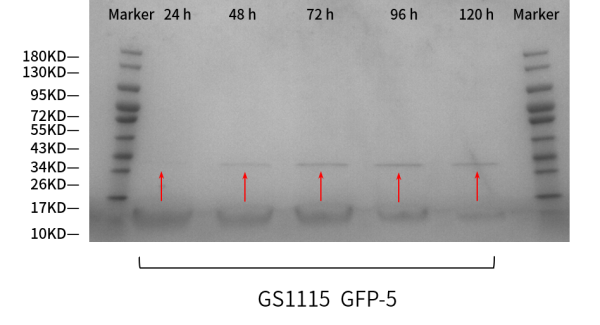 Figure 3. SDS-PAGE gel analysis of supernatant samples during the fermentation

All the results prove that AOX1 promoter works properly.

2. Inan Mehmet and Michael M. Meagher. The Effect of Ethanol and Acetate on Protein Expression in Pichia pastoris. 2001. Journal of Bioscience and Bioengineering. 9: 337-341.