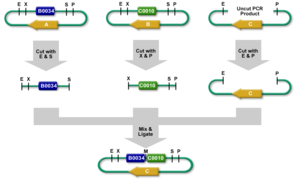 You should read the overview of 3A Assembly if you are not familiar with its mechanics. The protocol assumes that you have the part samples you will assemble ready in purified form (Miniprepped or PCR purified). The Protocol has has 4 stages: Restriction Digest, Ligation, Transformation, Picking Colonies.

Since you'll be assembling two part samples together, you will want to make sure you're putting them in the correct order. We will refer to the first part as Part A, and the second part Part B

Note: For linearized plasmid backbones provided by iGEM HQ, a plasmid backbone with an insert of BBa_J04450 was used as template. As a result any red colonies that appear during your ligation may be due to the template as a background. Digesting with Dpn1 before use should reduce this occurrence.