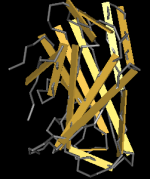 The expressed protein would have 103 amino acids with a molecular weight of 11.2 and a theoretic pI of 4.56. If the protein concentration is measured by optical density at 280 nm the extinction coefficients would be 15930 M-1 cm-1, assuming all pairs of Cys residues form cystines and 15930 M-1 cm-1, assuming all Cys residues are reduced. The ExPASy Prot-Parameter-tool predicted the estimated half-life 30 hours in mammalian reticulocytes, (in vitro) more than 20 hours in yeast (in vivo) and more than 10 hours in Escherichia coli (in vivo). It classified the protein as stable.