This part is a reporter vector for Bacillus subtilis. It integrates at the sacA locus of B.subtilis genome. It has a ampicillin resistance for cloning in E.coli and Chloramphenicol resistance for selection in B. subtilis. The multiple cloning site contains an rfp-cassette for selection and is followed by the luxABCDE gene cluster for luminescence reporter assays.

This backbone is a BioBricked version of the B. subtilis vector pAH328. This part was also evaluated in the publication The Bacillus BioBrick Box: generation and evaluation of essential genetic building blocks for standardized work with Bacillus subtilis by Radeck et al.. 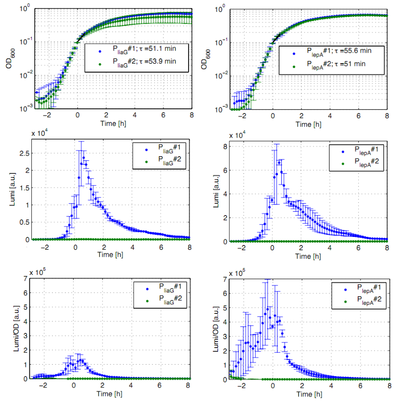 Fig. 1: Luminescence measurement of the constitutive Bacillus promoters PliaG and PlepA in the reporter vector pSBBs3C-luxABCDE. OD600 (up), LUMI (middle) and LUMI per OD600 (down) depending on the time (h) are shown for two different clones (green/blue). Data derive from three independent experiments, the graphs show the mean fo the three experiments and the standard deviation. Curves were fitted over each other (t=0, OD600=0,3) and smoothed by taking the average of three neighboring values. 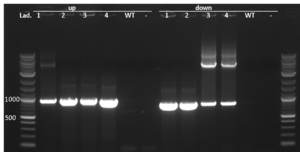 One primer is located outside of the region and its respective partner is located on the inegrative part of the vector, facing outwards. gDNA from W168 as a negative control should not give a PCR product.

The constitutive promoters PliaG and PlepA were evaluated in the reporter vector pSBBs3C-luxABCDE which contains the lux operon. This is why the promoter activity leads to gene expression and to the production of the protein luciferase. The luminescence of this protein can be measured with the plate reader Synergy2 (Biotek) (Fig.1). All clones show a normal growth behaviour. The activity of the promoters increases during transition from log to stationary phase. The second clone of the promoters PlepA and PliaG did not show any luminescence activity. Therefore additional clones should be measured. In the beginning of the growth curve the activity of both promoters increases to their maximum. This maximum activity appears during the same growth phase. PliaG has an activity maximum of about 100.000 Lumi/OD600 during the transition from logarithmic to the stationary phase. PlepA shows a maximum of about 400.000 Lumi/OD600. Comparing these two constitutive promoters the activity of PlepA is about four times higher than the activity of PliaG. In the late stationary phase the activity completely disappears.