aroA encodes the 5-enolpyruvylshikimate-3-phosphate (EPSP) synthase, which is the main target of the herbicide glyphosate and is strongly inhibited through glyphosate application. An amplification of aroE/aroA allows for glyphosate resistance (1), this is used in multiple GM plants to increase the yield and improve farming applications. If exposed to glyphosate, E.coli mutants will make changes in the original sequence of aroA to avoid the lethal effects of the substance. 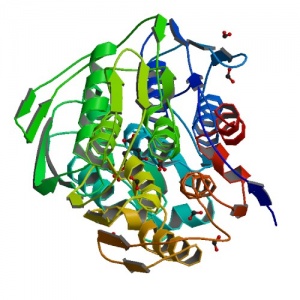 aroA is essential in B. subtilis 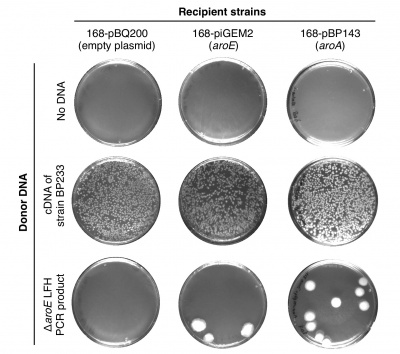 As essential bacterial genes appear to be more conserved than nonessential genes, the aroE gene probably does not permit the accumulation of mutations, which can be beneficial (Jordan et al., 2002). To confirm that the aroE gene is indeed essential, we transformed the B. subtilis with a PCR product consisting of DNA fragments flanking the target gene and the intervening spc spectinomycin gene (aroE::spc deletion cassette) and propagated the bacteria on SP rich medium plates (see Notebook). Several tiny colonies appeared on the transformation plates after 24 h of incubation. However, the potential transformants were not viable and supplementation of the agar plates with casamino acids also did not improve growth of the bacteria. Thus, under the tested conditions aroE seems to be essential in B. subtilis. Next, we tested whether the chromosomal copy of the aroE gene becomes dispensable for the bacteria carrying an EPSP synthase gene on a plasmid. For this purpose, we transformed the B. subtilis wild type strain 168 with the plasmids pIGEM2 and pBP143 containing the aroE and aroA EPSP synthase genes from B. subtilis and E. coli, respectively. The wild type carrying the empty plasmid pBQ200 served as a control. Next, we transformed the three strains with the aroE::spc deletion cassette and with chromosomal DNA of strain BP233 (gltT::spc), of which the latter served as the positive control. While we did not get transformants without DNA, many transformants appeared with chromosomal DNA of strain BP233 (Figure X). Moreover, the chromosomal copy of the aroE gene was only dispensable in strains carrying an extra EPSP synthase gene on a plasmid. To conclude, the aroE EPSP synthase gene is essential in B. subtilis. Moreover, the bacteria seem to require the enzymatic function of the EPSP synthase because also the enzyme from E. coli permits growth of the aroE mutant


Purification and ICTS with aroA

This year, our team came toghether with the iGEM team of Marburg, to investigate the interaction of the EPSP synthases AroE and AroA from B. subtilis and E. coli, respectively, with glyphosate. Glyphosate targets AroE and AroA in B. subtilis and E. coli, respectively (see Background information). Since the members of the Bange lab, which is hosting the iGEM team of Marburg, are experts in the field of Isothermal titration calorimetry (ITC), we did not hesitate to contact them for support. Our team cloned the aroE and aroA genes B. subtilis and E. coli, respectively, and the resulting constructs are suitable for overexpression of the Strep-tagged AroE and AroA enzymes in the E. coli strain BL21. The N-terminally Strep-tagged proteins can be purified by Streptactin:Strep-tag affinity purification system from the IBA, G├Čttingen. The purified proteins were send to the iGEM team in Marburg (Figure X). The ITC measurments were performed in Marburg. Unfortunately, not interaction between glyphosate and the EPSP synthases could be detected. The experiments will be repeated using freshly purified proteins.