This is a shortened and codon adapted version of the SpyCatcher improved for secretion in B. subtilis. It codes for a part of the fibronectin-binding protein FbaB from Streptococcus pyogenes that forms a covalent isopeptide bond with a short oligopeptide called SpyTag. There is the original (BBa_K1159201) and the codon adapted version (BBa_K2273014) of this oligopeptide in the registry. The SpyTag and the Minimal SpyCatcher can be fused as a Tag to proteins of interest and will then mediate covalent bonding of these proteins.

The SpyCatcher is a highly functional Tag, that can interact with its protein partner: the SpyTag. Upon interaction, additional C- or N-terminally translational fused proteins are brought in close proximity and can be linked together via this Tag system. Unfortunately the size of the SypCather (116 amino acid) is quite large and can therefore hinder the native folding of a linked the protein of interest.The 2017 team of TU_Dresden submitted a minimized version of the SpyCatcher to the registry to ensure the effective secretion necessary for their project. The mini. SpyCatcher is 32 amino acids shorter but still fully functional, which was proven by TU_Dresden team (see Application) as well as by the researchersthat proposed the minimization.

The mini. SpyCatcher was also submitted to the registry with an added C-terminal His-Tag to purify the protein constructs when SpyTag/SpyCatcher link together.

The 2017 team of TU_Dresden used mini. SpyCatcher together with its partner SpyTag to investigate the potential of using B. subtilis secretion system for the production of self conjugation multi protein complexes. The his-tagged mini. SpyCatcher was C-terminally fused to mCherry which functions as a reporter protein. The secretion was mediated through the N-terminal signal peptide of AmyE. The secretion of the functional mCherry fusion protein could be proven (Figure 1 and Figure 2). The functionality of the mini. SpyCatcher was proven through SDS-Page (Figure 3). After incubating supernatants containing mCherry-mini. SpyCatcher and mCherry-SpyTag the fusion product was detected, proving the covalent bonding of the Tag partners. 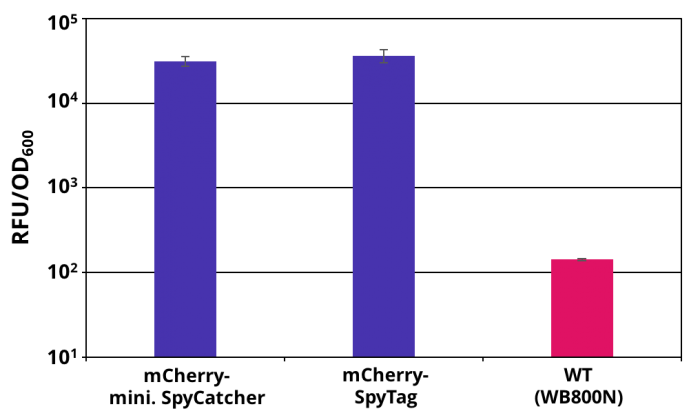 Figure 1: Endpoint measurement of the fluorescence from supernatants. Expression of the multi copy mCherry constructs (purple) was induced with 1% Xylose and the supernatants were harvested after 16 h of incubation. Wild type supernatant is shown as a control (pink). Excitation wavelength was set to 585 nm and emission was recorded at 615 nm. The fluorecense was normalized over the optical density of the cell culture at 600 nm (OD600). Graph shows mean values and standard deviations of at least two biological and three technical replicates. 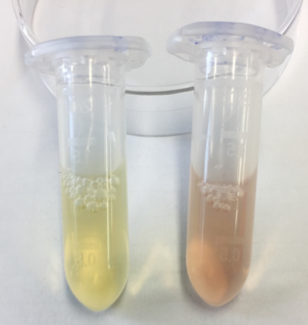 Figure 2:Supernatants of B. subtilis cultures. Wild-type supernatant (left) and a mCherry-mini. SpyCatcher secreting strain (right). The expression of the multi-copy mCherry was induced with 1% Xylose and the supernatant was harvested after 16 h of incubation. 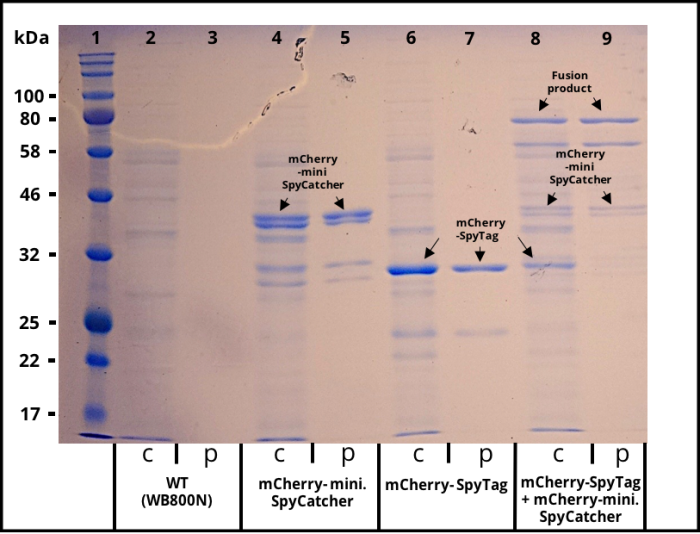