Not Released
Sample Not in stock
Experience: None
2 Uses
Get This Part

Promoter gsiB for B. subtilis

Promoter gsiB is a sigma factor B dependent promoter found in B.subtilis. In B.subtilis endogenous sigma factor B is activated under mild stress. These mild stress conditions can be generally split into nutrient stress response and physical stress response. Nutrient stress response is triggered by low levels of ATP and GTP and physical stress response is triggered by exposure to blue light, salt, heat, acid or ethanol (Nguyen et al). The promoter gsiB has been used previously as a read out for the activation of sigma factor B (Suzuki et al). The context with which we used the promoter gsiB, was to take blue light as an input and give Polymerase Per Second(PoPS) as an output. To do this the other potential inputs need to be carefully controlled so that only blue light activated the sigma B and gives a PoPS output. In order to get sufficient sigma B activation by blue light the light receptor YtvA (BBa_K143037) needs to be over expressed in B.subtilis#1

Summary: Verified that this promoter can respond to salt stress in Corynebacterium glutamicum as well

CAU_China 2021 used this part in their composite kill switch to make sure the engineered bacteria would die when the salinity and alkalinity of the soil decrease to an expected level. Since the promoter PgsiB can be activated under mild stress, we use it to respond to salt stress in Corynebacterium glutamicum in our project.

Hence, we aim to verify that the promoter PgsiB, originally from Bacillus subtilis, can respond to salt stress in Corynebacterium glutamicum and we also want to document its response towards different salt concentration.

We use the gene circuit below(BBa_K3796206) to test the function of PgsiB by the fluorescence of GFP.

We build the gene circuit by ClonExpress II one-step cloning kit (Vazyme Biotech, China). Particularly, we destroyed the tac promoter on the plasmid pXMJ19 to get rid of its influence.

After sequencing and amplifying, that vector as well as unmodified pXMJ19 were transferred into Corynebacterium glutamicum separately and cultivated on plates. After cultivating them in the LB liquid culture medium at 100 rpm, 30℃ for 12h, the OD600 of the two bacteria were adjusted to nearly the same(nearly 2.0) and inoculated in the salt gradient LB liquid medium. After a cultivation of 24h, the bacterial solution was collected and washed with PBS. Then we measured its fluorescence intensity by HITACHI F-7000, a fluorescence spectrophotometer, according to the excitation light of 488nm and emission light of 507nm and OD600. Data are shown below: 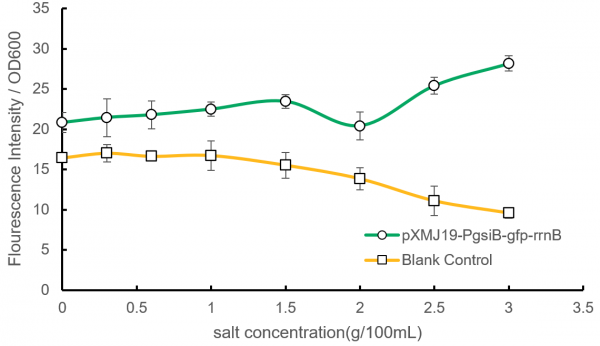 Fig.2 Fluorescence intensity results in the verification of PgsiB (the excitation light of 488nm and emission light of 507nm)

We use the control group(bacteria with empty vector) to exclude the influence of the fluorescence bacteria originally have. Through two-way ANOVA, we know there is significant difference between the control group and the experiment group, proving our results valid. Data shows that the difference of relative fluorescence intensity(fluorescence intensity/OD600) between the two becomes bigger as the salt concentration increase, indicating that there is higher expression of gfp under the control of PgsiB when the salt concentration is high.

We finally come to the conclusion that PgsiB can respond to salinity changes in C. glutamicum, and high salt concentration can improve the expression of the downstream genes of PgsiB. Three parallel experiments were done later, which supported our conclusion. However, we haven’t observed a typical turning point in our curves, and we want to do more experiments about that in near future.