Not Released
Sample In stock
RFC: 25
Experience: None
13 Uses
Get This Part

Cellulose binding domain (CBD) of Endoglucanase A (cenA) from Cellulomonas fimi with an endogenous C-terminal linker. The part is in Freiburg format (RFC 25) for ease of use in protein fusions.

The cellulose binding domain region occurs at the N-terminus of the cenA gene (UniProt P07984) and is from the CBM family 2.

The linker sequence (PTTSPTPTPTPTTPTPTPTPTPTPTPTVTP) is Pro-Thr box which has an extended conformation and acts as a hinge region (1). The endoglucanase CBDcenA has 50% homology to the exoglucanase CBDcex (BBa_K863101) and the linker is highly conserved in both, but the order of the catalytic, linker and cellulose-binding regions is reversed (2). It has been shown that CBDcenA has the highest binding affinity for crystalline cellulose out of the C. fimi CBDs (3).

As part of our project we carried out an assay to determine the relative binding ability of CBD-sfGFP fusions to bacterial cellulose.

In our second assay performed to determine the relative strengths of various CBDs’ binding to bacterial cellulose – represented by the percentage fluorescence left from CBDs fused to (sfGFP (RFC25)) bound to bacterial cellulose discs, when subjected to various washes (protocol here) - it was determined that the fusion with CBDcenA had moderate binding ability in comparison to five other CBDs fused to sfGFP, having the third and fourth highest fluorescence remaining after three washes with 5% BSA and dH2O respectively. 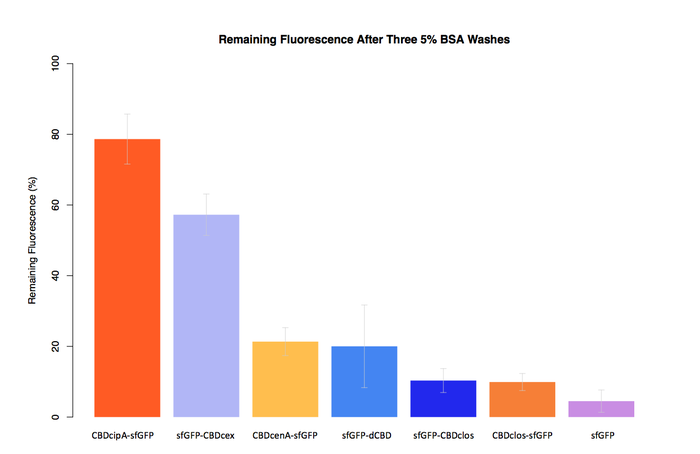 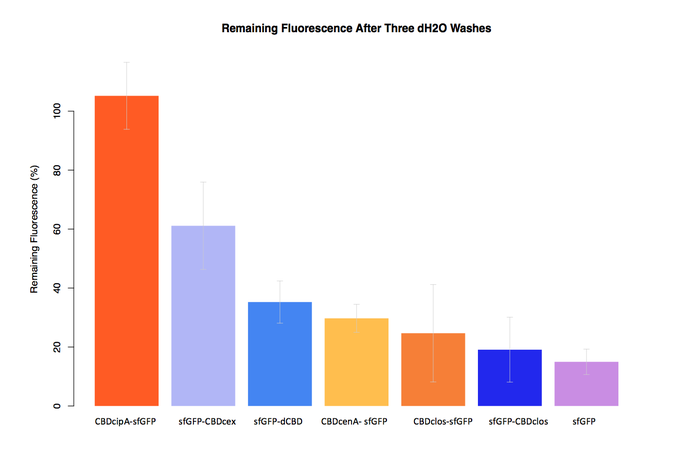